“With that sum driven mostly by YouTube, the executive is bullish about the opportunity for growth from Facebook, estimating that number could grow by four times over the next decade,” added Billboard. Existing deals with Facebook and Instagram, as well as the prospect of agreements with Snapchat, TikTok, Twitter and other platforms (not least in Europe, with the recent approval of the new copyright directive) are fuelling this optimism. 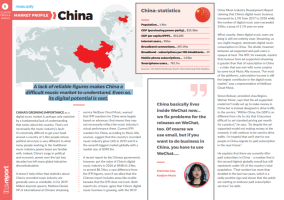 A lack of reliable figures makes China a difficult music market to understand. Even so, its digital potential is vast.
Read More

Earlier this month, we reported on startup Pex's latest analysis of videos on YouTube, including its claim that music accounted for 5% of the total content on YouTube in 2019, but 22% of the views. Now Pex has published...
© Copyright Music Ally All rights reserved 2020 - Website designed and maintained by