Spotify has published its financial results for the first quarter of 2019, including a significant milestone: 100 million premium subscribers. That’s up from 96 million at the end of 2018. and 75 million a year ago. 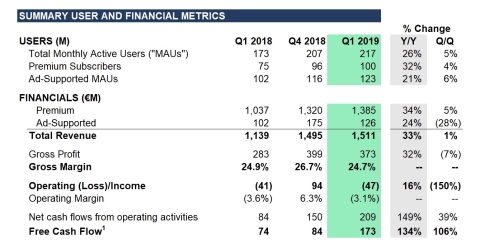 The company added that it now has more than two million users in India, having signed up one million in the first week after its launch in late February.

Spotify described the first quarter as “largely positive with most metrics outperforming our expectations and landing at the high end of, or exceeding, our Q1 guidance”. It added that the growth in premium subscribers was driven by a promotion in the US and Canada, as well as “continued strong growth” in family plans, plus the impact of a price cut to the combined Spotify and Hulu subscription in the US.

There are sensitivities around some of this. “Family and Student plans continue their fast growth and have continued to increase as a percentage of our total subscribers,” said Spotify. Labels have voiced concern about this trend, and its impact on Spotify’s ARPU – average revenue per user. ARPU was €4.71 in Q1, which Spotify noted was roughly flat year-on-year, or down 2% “excluding the impact from foreign exchange rates”.

The filing continued: “Downward pressure on ARPU has moderated, and we expect that ARPU declines through the remainder of the year will be in the low single digits. As we’ve spoken about in previous quarters, the declines in ARPU are a result of shifts in both product and geographic mix. Approximately 75% of the impact to ARPU is attributable to product mix changes, and the remainder a function of changes in geographic mix and other factors.”

In the filing, Spotify talked about a “small incremental benefit” to its advertising revenues from its acquisition of podcasting firms Gimlet Media and Anchor, as well as the ads placed within its own ‘original’ and exclusive podcasts.

“We expect the revenue from podcasts to accelerate through 2019. Over time, our ambition is to develop a more robust advertising solution for podcasts that will allow us to layer in the kind of targeting, measurement, and reporting capabilities we have for the core Ad-Supported business,” claimed Spotify, which now has more than 250k podcast shows available on its platform.

“Ad-Supported revenue growth underperformed our expectations in Q1, primarily in the US and primarily with our sponsored sessions video product. The performance shortfall was pricing related. We have course corrected and are seeing strong growth across the ads business in Q2,” said Spotify.

Spotify called out smart speakers, including the partnership with Google that has seen it give away Google Home Mini speakers to family-plan subscribers, as strategically important too.

“We believe that voice speakers are a critical area of growth, particularly for music and podcasts, and we intend to continue to pursue opportunities to expand our presence in that area,” claimed Spotify’s financial announcement.

The company added that its partnership with Samsung to preload the Spotify app on the latter’s Galaxy S10 smartphone will include a six-month free trial of Spotify Premium in the US, as another juice for subscription uptake.

Spotify also provided its latest guidance for future financials. By the end of 2019, it expects to have 245-265 million monthly active users and 117-127 million premium subscribers, while predicting annual revenues of €6.35bn-€6.8bn.

French collecting society Sacem has published its financial results for 2021, with collections growing by 7% to €1.06bn (around $1.12bn).
Read More

Spotify is preparing for another attempt to nail the social aspects of music streaming with 'Community'.