Uber went public on Friday, and the event spurred David Israelite, the boss of the National Music Publishers Association (NMPA) in the US, to voice his latest criticism of Spotify.

“Question: what are the differences between Uber and Spotify? Both are tech cos (not transportation/music cos). Both lose money. Both went public and enriched owners while most important input (drivers/songwriters) struggle with low pay. Is one better than other? If so why?” tweeted Israelite.

The comparison of Uber drivers to songwriters is a little tricky when you get into it, but our point in reporting it is to highlight what Israelite’s tweet shows about the nature of the dispute between the publishing community and Spotify in the US since it announced plans to appeal against new songwriter-royalty rates. Uber isn’t a comparison that any creator-focused company would relish. How did that Uber IPO go, by the way? The company priced its IPO at $45 per share, valuing it at just over $75bn, but its share price fell by 7.6% on its first day of trading. 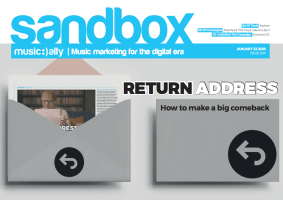 Sandbox Issue 244: How to Make a Big Artist Comeback

For grumpy Generation X-ers, one of streaming music’s saving graces is the lack of enthusiastic influencers bursting out of the screen at them. Look away now, if you’re in that group: Spotify is testing a way for influencers...
Read More

The USC Annenberg School for Communication and Journalism has published its third annual report on the music industry, focusing on diversity and inclusion. It’s based on analysing the gender and race/ethnicity of artists,...
© Copyright Music Ally All rights reserved 2020 - Website designed and maintained by