The Midemlab startups contest has become a key part of the annual Midem conference in Cannes. Today, this year’s finalists in four categories are pitching their technology and business models to panels of jurors, as well as the Midem audience.

Big Ear Games from Finland was represented by CEO Aviv Ben-Yehuda (pictured above). It’s developing a mobile music-learning game to “help music fans and especially music learners to explore how music works, and then make music”, he explained. It combines music-based ‘puzzle sets’ with a simple music composer. “Most people would have liked to learn an instrument… but the problem was how music works was kept a mystery.”

He suggested that current music-learning apps are “missing the fun part” of mobile gaming. Ben-Yehuda cited Lego as an inspiration for Big Ear Games’ products. “And we are engaging with popular songs and artists”.  The game itself involves progressing as a musician, collecting instruments and then making tunes and playing in bigger and bigger virtual venues. People can share the tunes they create via other social/messaging apps. Its advisors include former execs from Angry Birds developer Rovio, and Minecraft’s educational arm MinecraftEdu.

It’s aiming for young people: 6-15 year-olds. “Right now we give a strong focus to the youngest, and later we’ll open it up to older ages,” said Ben-Yehuda. It’s also working with a Finnish TV channel, which is launching an educational platform for children. Big Ear Games has licensed some of its songs to the platform in a partnership. Native Instruments is another partner, too. Its consumer app is already available for Android and for iOS. For now it’s free, but “later on we will add a subscription model”. 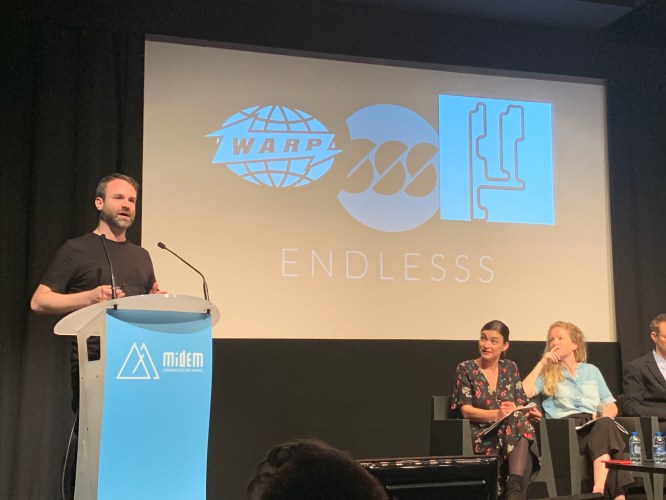 Endlesss from the UK was represented by CEO Tim Exile, who spent ten years as an artist before teaching himself to code and building a digital music-instrument business. And now Endlesss: “We want to turn music-making into something fundamental to how we express ourselves, build our identities, and deepen our relationships,” he said. Endlesss wants to do for music creation what apps like Snapchat and TikTok have done for expression in video.

“There is no platform for shortform, collaborative music-making, and this is the opportunity,” he said. “We need to shrink the consumption/creation loop and make it more accessible.” Endlesss has built an app based round musical ‘riffs’. An invitation-only beta launched two months ago. “We’ve got a nascent, very small community of 1,100 installs, but these people have already made 150,000 riffs… top daily users spend 6-10 hours creating and remixing each other within the app… It’s addictive, like Candy Crush, but you actually get something out of it. It’s creative.”

“Our goal is to build a platform where 100 million active users create and consume riffs, express their identities and inspire each other,” he continued. It’s planning to build social and discovery features into the app, deepen the creation features, and prepare for a commercial launch. He was questioned about the status of rights for the music created using Endlesss. “We will have to deal with DMCA takedowns at some point, but in Article 13 there’s a grace period of a few years and of a certain size, so it is something we’re going to have to face.”

The business model will be freemium: a free tier and then a subscription tier offering more features. Exile said he’s also fascinated by the kind of monetisation happening on platforms like Twitch, which could find a place on Endlesss in the future. 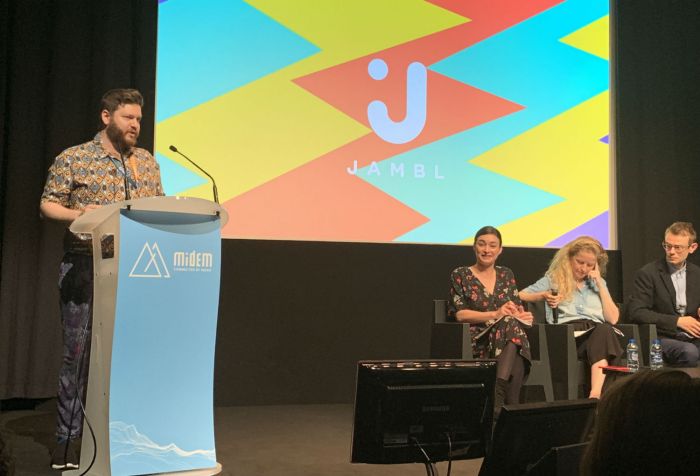 Jambl from Germany was represented by CEO Gad Baruch Hinkis. It’s a music-creation app offering drums, bass, chords and melody – he actually delivered part of his pitch by rapping over music that he was creating on the fly. “The whole music industry is shifting, and interactive content is shifting,” he said. “We’ve got kids making beats daily, and we’re already making money!”

If you’re pitching a music-creation app, why not rap your pitch over a beat you just created? Jambl’s CEO did exactly that at #midemlab today (#midem) pic.twitter.com/0vczNqSGWW

“We need to shift the perception that music is just for musicians. It’s for everyone: it’s for humans!” he said. “That’s the challenge.” On one side, he sees competition from great technical tools which are too complicated for non-musicians to use, while on the other there are simple loop-based music apps, which he suggested aren’t true music-creation. Jambl’s app is used to create music, and also videos to go with it.

How does licensing work? “Right now we are not focused on solving the licensing problem, but we are aware of it,” he said. The first task will be to build a business that’s making money, and then a community on top of that. “And then we’re going to need to activate the whole licensing thing: how do we monetise not only the app, but the content that the users are creating?” There’s potential to offer samples from artists in Jambl, with users able to create music using them, which could ultimately generate royalties for the artists. The app has around 70k installs so far.

Couldn’t a bigger app like TikTok add this kind of thing as a feature? Hinkis suggested this isn’t its core, but that it could be a potential exit for Jambl in the future. “We could create a musical filter in TikTok. That’s one of our plays!” he said. 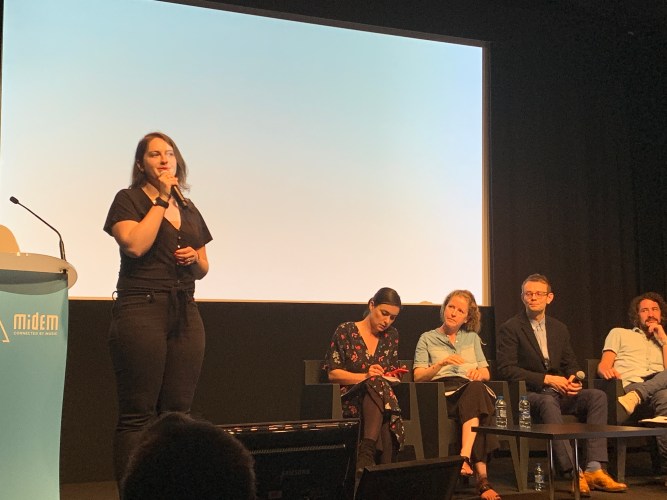 Muzeek from France was represented by head of communications Myriam Caron. Its focus is on helping people fit music to their videos, but also (crucially) licensing it. “What belongs to Beyoncé will always belong to Beyoncé!” as she put it. The company was founded by a famous French composer, with the ambition of creating an “augmented composer” capable of creating music for use by video creators.

“We start with real composers. They write for us one original composition, and with the help of our algorithms, we’re able to multiply this composition into hundreds of variations… They’re writing one song, and they’re getting the benefits of 200,” she said. But there’s also music-to-video synchronisation software: a creator puts their video in, chooses music, and clicks a ‘synchronise’ button. “With our AI, we’re able to recalculate the music in order to make it fit perfectly with your video… a beginning, middle and an ending. Even a climax!”

“We make video creators save time: on research, on synchronisation and on licensing,” she added. The service is subscription-based, starting at €19 a month during its beta phase, which started in January. “We want to work with musicians, and to maybe get famous artists to use our tools… we need artists trying it out,” she said. “As of today, we’re working with some of the best composers.” 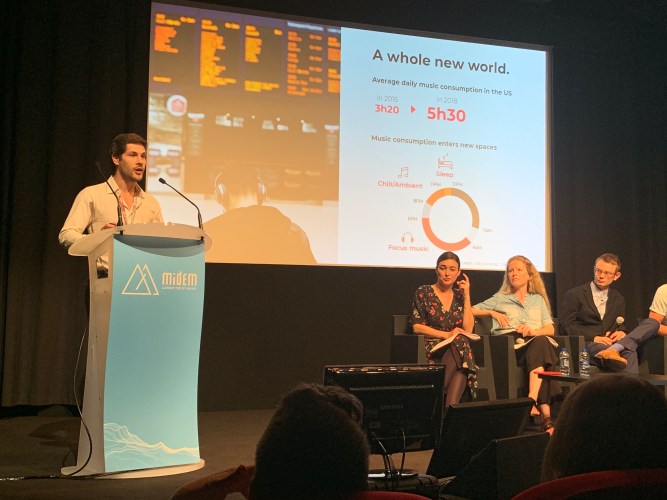 Lonofi from France was represented by co-founder Edouard Tallec. He talked about how streaming is changing how the music industry works, but also how people consume music – including looking for mood-based playlists around themes like sleep and relaxation. “Increasingly, we don’t really care about what content we play, but about what that content does for us,” he said, while warning that “mood is highly subjective”.

In other words, a sleep playlist on Spotify won’t work for everyone. So Lonofi is a mobile, desktop and smart-speaker app that enables “anyone to create their own ambient music to focus, chill, sleep and meditate”. It’s using AI music-generation technology, which can be customised in real-time by the listener, including controlling it by their voice. “You’ll be able to wake up and tell your smart speakers ‘Okay Google, send me an energising ambience to wake me up this morning’… And then you’ll be able to say ‘add some drums’… and it will adapt to your commands.”

The beta launched in February, with the app’s launch in July, and the smart-speaker version later in the year. Tallec suggested there is scope for collaboration with existing meditation apps like Headspace. Its business model will be subscriptions. “If we get more than one million people on our app, I’m sure we’ll be able to convert some of them to paying a subscription, and then we’ll be profitable…”

That concluded the session, with the winner to be announced later today. Stay tuned!

We first wrote about startup Community in early 2019, when it emerged as a rival to marketing firm SuperPhone, helping celebrities (musicians included) to create text-messaging communities for their fans. It has since been used...
Read More

Given some of the sensitivities around AI music and virtual artists in the music industry, it’s certainly bold for a startup exploring those areas to call itself Authentic Artists. Still, that’s what one startup...
© Copyright Music Ally All rights reserved 2021 - Website designed and maintained by