Alissia Music from Germany was represented by CEO Bosco Bellinghausen (above). Its slogan is “soundtrack your life” – an app that discovers songs for people based on their mood and preferences. They start by picking their preferred genres and setting their ‘mood compass’ by hearing clips of songs, and telling the app what moods they correspond to. Then, the app works by getting them to choose their current mood, before generating them a playlist.

“We put a lot of love and thinking about how to bring back the heart and soul to music,” he said. But there’s an interesting business model involved: the company will pay €0.01 per minute for every stream of ‘immersive and high-resolution’ songs, to their rightsholders. So a four-minute song being played a million times would generate €40k. “Probably the most radical business model you will ever hear about at Midem!” he said. The product will launch by Christmas this year, so it’s looking to license music and raise funding.

It’s already on its fourth pivot, having begun as a blockchain-powered streaming service in 2017. Bellinghaus suggested that Alissia could also partner with bigger streaming services via their API. “People say ‘nobody’s gonna pay for this’. They will,” he added. “We’re not selling consumption, we’re selling quality time!” 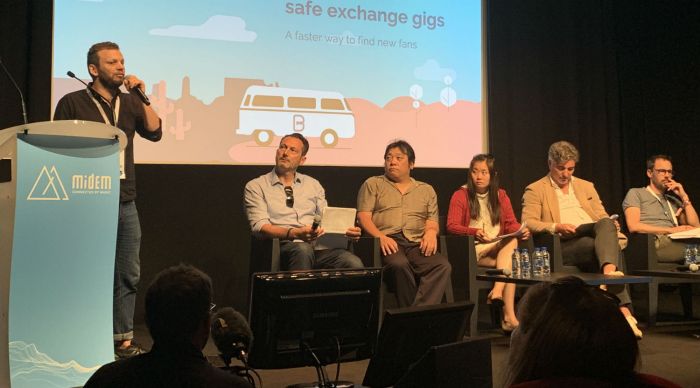 Banding from Hungary was represented by CEO Renato Horvath. It’s a matchmaking app for bands and musicians, to help them to “exchange” gigs and find new fans. Once matched, the app can be used for the two artists to chat, and arrange details of their joint gigs. It will potentially use a freemium model, with free basic features and then a premium tier with filtering options and an “endless” number of simultaneous exchanges. A subscription model could also be used, with the app also ripe for direct-to-fans ticketing and merch sales – from which Banding could take a commission.

The app is still being developed, but it already has partnerships with music festivals to organise live matchmaking events, and sign up artists. It also has relationships with labels, management companies and agents to sign up established artists as “ambassadors” within the app. It’s also just run an open call for a support slot with Golan, one of Romania’s biggest bands.

Horvath said he hasn’t seen many apps that try to connect bands with one another, as opposed to with promoters or venues. “We think that using each other’s potential for the bands in their home territories is much more powerful,” he said. 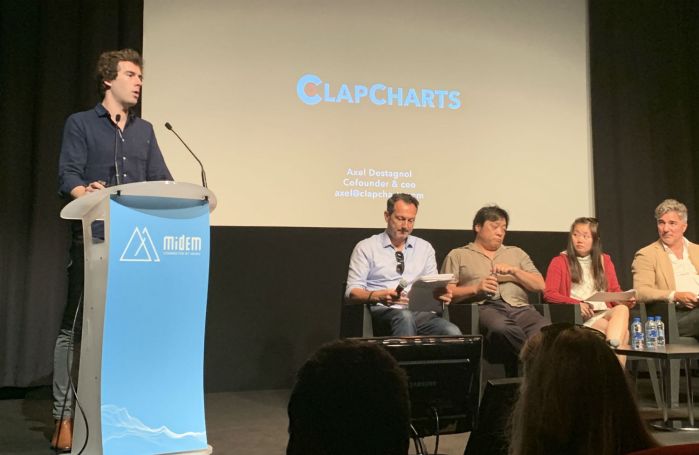 ClapCharts from France was represented by CEO Axel Detagnol. It’s trying to help artists when they launch new music, and face the challenge of whatever attention they get in the first couple of days falls fast. “It’s the toughest one for artists right now,” he said. “ClapCharts helps to take promising artists to listeners.” A way for artists to get feedback from listeners on their music by uploading their music to ClapCharts, which then becomes available within its discovery app.

Listeners can review the tracks they hear, with those reviews – but also their skips and playlist-adds – are used to provide feedback to the artists on how their songs are being received. The company also has a scouting tool for music-industry professionals – labels, for example, or media – so they can see which artists are performing best within ClapCharts. “All the data that we collect in the app and in ClapCharts Scouting is available to the artists,” he stressed. So far, more than 6,000 artists have signed up.

The model is freemium / subscription for artists, with the subscription plans starting at €12 a month. It’s currently focusing on France and the US. It’s currently promoting its app via social ads and viral marketing, with artists posting about it once their music is available. “What we’re good at is spotting very early-stage talents that are invisible otherwise…” 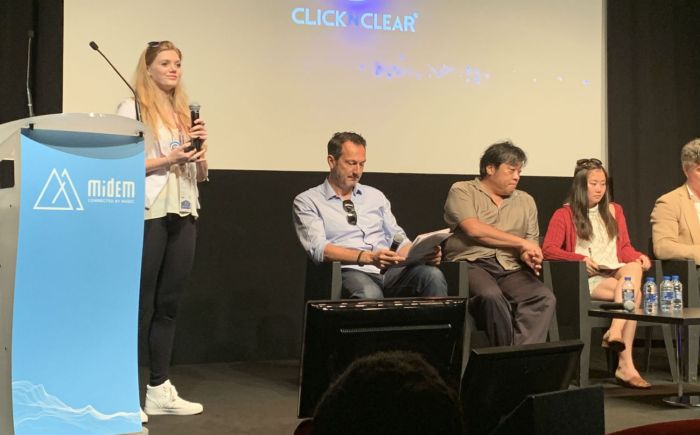 ClicknClear from the UK was represented by CEO Chantal Epp, who we last saw winning the startups pitch at our NY:LON Connect conference in January. It’s a platform focused on licensing music to performance-sports like cheerleading, gymnastics and competitive dance. “Most of these sports are not educated in music-licensing requirements,” she said: they assume they’re covered by public-performance licences for venues, but the mixes they’re creating require other rights too.

It pre-clears master and publishing rights, including the rights to adapt music and choreograph. It’s signed deals with more than 110 labels and publishers, building a catalogue of 6.5m tracks available for its customers to use in their performances. ClicknClear is promoting its service to performance-sports teams, while also working with the sports bodies to ensure teams that aren’t licensing music properly are made aware of their responsibilities. It’s also providing the necessary data so that the public-performance royalties can be accurately calculated.

“In the next 18 months we estimate to be addressing a total addressable market of $100m,” said Epp, who’s working towards raising a Series A funding round towards the end of this year, to fund the building of its enforcement and verification platform. The company takes a cut of the revenues from its licensing, charging a single fee per track, per mix, for one year’s use. Epp sees it as a potential market of $1bn, across the various sports. 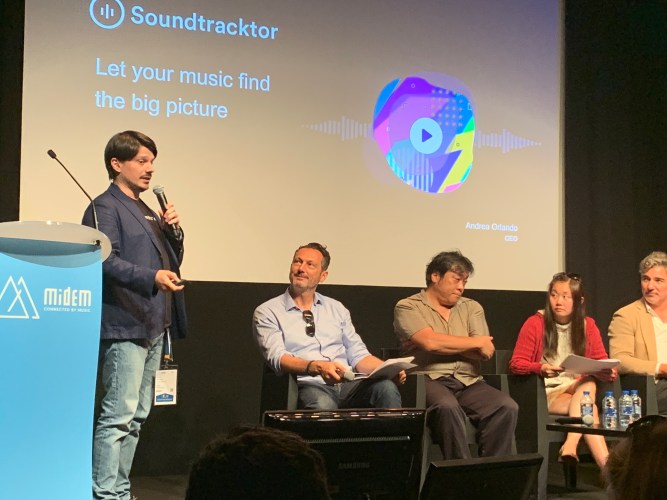 Soundtracktor from Denmark was represented by CEO Andrea Orlando. It’s a platform to help composers build their own ‘webshops’ making their music visible to potential clients like marketing agencies. The idea being that agencies can get instant recommendations for already-composed music that might fit their new campaigns.

There’s artificial intelligence technology working away here too, to power the recommendations: briefs from agencies will be matched with 10-20 music tracks from Soundtracktor’s community of composers.

The company already has composers signing up, and is working on pilot projects with agencies. Orlando said composers will have free access to the platform. Soundtracktor will take a 15% cut of the licensing fees for music. Its MVP will launch in the summer, ahead of a full launch next year. “Our mantra is power to the composers!”

With the main Midem conference shifted to later this year, organiser Reed Midem is preparing for its Midem Africa online event that starts on 28 June. Yesterday, it confirmed a number of the speakers and sessions, including...
© Copyright Music Ally All rights reserved 2021 - Website designed and maintained by