MelodyVR gets into Broadway theatre content with John Gore

Users of music virtual-reality app MelodyVR should be getting ready for more tappy feet and jazz-hands in their headsets over the coming months. The company has announced a deal with Broadway-musicals firm The John Gore Organisation (JGO). The pair will be creating a new joint venture to produce Broadway theatre content for VR, with JGO investing £5m in MelodyVR as part of the partnership.

MelodyVR is also issuing new shares – JGO has an option to buy here – which would value the company at £220m.

“Musical theatre is a natural evolution in our journey,” said MelodyVR CEO Anthony Matchett. “Using VR technology is just one more way to deliver Broadway to fans around the globe, especially when the live experience of Broadway and touring Broadway is beyond their reach,” added JGO boss John Gore.

Both sides will be hoping that the deal, as well as the continued growth of VR headset sales, will put them – ahem – in the money. 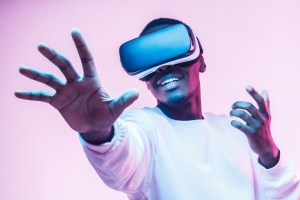 Research firm Omdia has published its latest predictions for the virtual reality market claiming that 6.4m consumer VR headsets will be sold in 2020, with their owners spending $1.1bn on content. The company reckons that...
Read More