DJ Khaled tipped for Billboard lawsuit over US charts row

DJ Khaled recently lost out to Tyler, the Creator in a battle for top spot on Billboard’s US albums chart – but that battle could now spawn a lawsuit against Billboard by Khaled. That’s according to Page Six, which appears to have been given a detailed (and furious) briefing by the artist’s team. The allegation is that downloads of DJ Khaled’s album bundled with an energy drink were disqualified from chart eligibility that week, while bundles of Tyler’s album with merchandise were counted. Billboard’s position appears to be that there were “strange anomalies in the data” for Khaled’s sales, while the New York Times suggestedthe issue may be around how the energy-drinks bundle was promoted – and whether it encouraged people to buy multiple copies. Cue arguments. What’s clear, at a time when bundles of all kinds are increasingly common, is that the rules (not just in the US either) on how these kinds of promotions are counted by chart-compilers need to be as clear as possible. 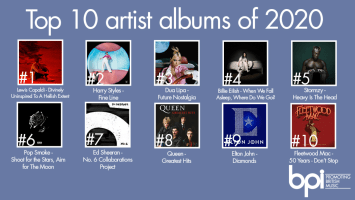 As consumption data and revenue figures emerge for the music industry’s 2020, we’ll get a fuller picture of the Covid-19 pandemic’s impact. Early out of the blocks, as usual, is British industry body the...
© Copyright Music Ally All rights reserved 2021 - Website designed and maintained by