Ed Sheeran and Shawn Mendes are no stranger to big digital numbers. Their latest achievements come from YouTube.

Shawn Mendes, meanwhile, has just reached 20 million subscribers with his own YouTube channel. He’s also doing rather well in this week’s YouTube Global Artists chart, being the third-ranked artist with 185m weekly views across his catalogue. Only now-familiar chart-topper Alka Yagnik (232m) and Latin star J Balvin (200m) are ahead. To wrap things up nicely, Ed Sheeran is also back in the top 10 of this particular chart, with 134m weekly views.

GitHub is one of the most popular sites for developers in the world, hosting open source code and helping people manage their projects. It's also on a collision course with music rightsholders in the US, over a takedown...
Read More 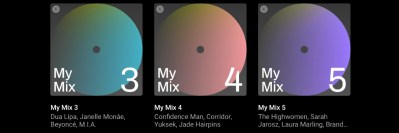 We reported in September on YouTube Music testing some personalised 'My Mix' playlists, which followed Spotify's 'Daily Mix' template in offering people a suite of playlists based on different genres or clusters of their...
© Copyright Music Ally All rights reserved 2020 - Website designed and maintained by