Amazon is famously cagey when it comes to releasing meaningful numbers for its music services, but a well-briefed report by the Financial Times this morning offers some new numbers. “The number of people subscribing to Amazon Music Unlimited has grown by about 70 per cent in the past year, according to people briefed on its performance,” it reported. “In April Amazon had more than 32m subscribers to all its music services including Unlimited and Prime Music.”

This shouldn’t come as a surprise. In April 2018, Amazon told The Verge that it had ‘tens of millions’ of active subscribers, having grown its Music Unlimited subscribers by 100% in the previous six months (so, mischievous aside: one angle on the latest stats might be that Music Unlimited’s subscriber growth is slowing. But 70% year-on-year growth is still outperforming individual rivals and the wider streaming market by some distance).

Amazon didn’t confirm the figures to the FT, but its head of music Steve Boom did say that 14% of Amazon Music subscribers are aged 55 or older, reinforcing the sense that to some extent, this growth isn’t just about attracting people away from rivals.

The comparison to those rivals is the FT’s angle however: that Amazon Music’s growth is outstripping that of Spotify and Apple Music. We do have firm figures on those. Spotify’s premium-subscriber count grew by 32% year-on-year to the end of March, when the company had 100 million subscribers. Apple Music grew from 40 million subscribers in April 2018 to 60 million in June 2019 – so 50% growth in 14 months.

Perhaps the figure to focus on is that the three largest players in the music-subscription space now have at least 192 million subscribers. Throw in Tencent Music (28.4 million paying users for its online-music services at the end of March) and the total grows to more than 221 million from the top four players – with Tencent and Spotify yet to update their figures for the second quarter of 2019.

It’s a far cry from the days, not that long ago really, when 100 million paid subscribers for the entire industry seemed a daunting, far-off target. Yet here we are in 2019 having more than doubled that total from the ‘big four’ services alone. 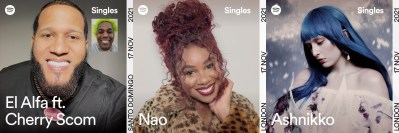 Spotify is having a busy month, it's fair to say. Today's roundup includes Christmas songs, expansion, podcasts and more.
© Copyright Music Ally All rights reserved 2021 - Website designed and maintained by