Apple Music is getting a new weekly chart, driven by data from Shazam, the music-identification app that Apple acquired in September 2018.

The chart is called Shazam Discovery Top 50, and is a global chart ranking 50 “up-and-coming songs from breaking artists”, based on what Shazam’s users have been tagging that week. The chart will be updated every Tuesday, with a playlist on Apple Music enabling people to stream it in full, or browse through the tracks.

Well, we say ‘global’ – for now the chart is based on data from 11 countries: the US, UK, Brazil, Mexico, Australia, Canada, France, Germany, Italy, Spain and Russia. Apple says that it will be adding in more countries “soon”.

This isn’t just a rundown of the 50 most popular tracks on Shazam. Apple explained a little more about the methodology in its announcement of the chart.

“The ranked songs are all at different points in their individual lifecycle and the majority of artists represented are emerging and up-and-coming,” said Apple. “All are experiencing a level of momentum indicative of future potential of hitting the top of Shazam’s Charts, and show any or all of the following patterns: moving quickly through Shazam’s charts, growing rapidly, steadily and/or geographically.” 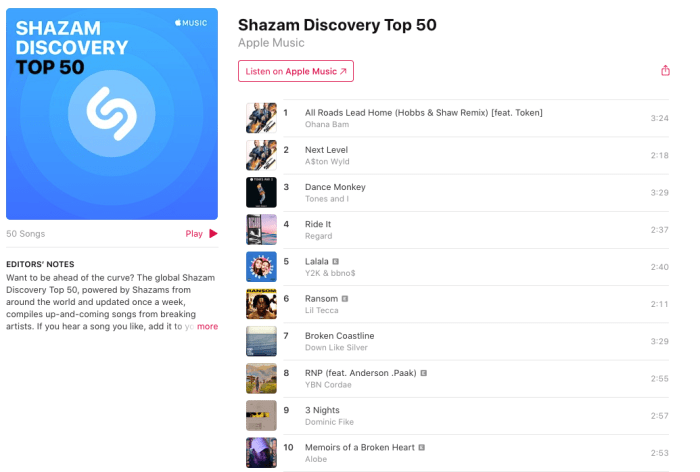 The inaugural Shazam Discovery Top 50 chart is live now, with the top slot going to Chicago rapper Ohana Bam with his track ‘All Roads Lead Home (Hobbs & Shaw Remix)’. The brackets give away one reason for its trending status: it’s one of the tracks on the official soundtrack for blockbuster film ‘Fast & Furious Presents: Hobbs & Shaw’ movie.

In fact, the number two track on the new chart, ‘Next Level’ by A$ston Wyld, also features on that movie soundtrack. Other artists figuring in the inaugural top 10 are Tones and I; Regard; Y2K & Bbno$; Lil Tecca; Down Like Silver; YBN Cordae; Dominic Fike; and Alobe.

The ’emerging and up-and-coming’ aspect is clear: only one of those artists also features in the top 10 of Shazam’s existing ‘Global Top 200‘ chart, which is a pure popularity ranking. Y2K & Bbno$ are in seventh place in that list, which is otherwise made up of established artists like Shawn Mendes / Camila Cabello, Lewis Capaldi, Billie Eilish, Lil Nas X and Ed Sheeran.

Shazam Discovery Top 50 may be the only chart using Shazam’s data to offer a ‘predictive’ take on the next wave of hot tracks, but Apple Music’s rivals have their own ways of ranking and/or surfacing breaking artists.

Spotify, for example, has its Global Viral 50 chart plus localised versions of it for 66 countries. That service also has its Fresh Finds family of playlists based on data scraped from listeners and external blogs alike, with the flagship ‘Fresh Finds‘ playlists followed by nearly 690,000 people.

SoundCloud, another service that prides itself on spotting new artists early, has its New & Hot chart. Meanwhile, two of media brand Rolling Stone’s recently-launched music charts focus on breaking tracks: its Trending 25 chart ranks songs by their percentage-growth in weekly streams, while its Breakthrough 25 chart focuses on artists making their first chart appearance.

There will inevitably be some crossover between these different charts. For example Lil Tecca’s ‘Random’ is number six in Apple Music’s new Shazam chart but is already top of SoundCloud’s New & Hot chart, while Tones and I’s ‘Dance Monkey’ is third in Shazam Discovery Top 50 but second in Spotify’s current Global Viral 50 rankings and tenth in Rolling Stone’s current Trending 25 – a chart that’s topped by a different Lil Tecca track. 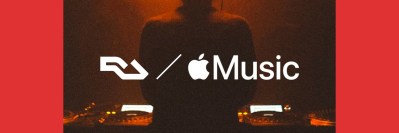