YouTube is changing the way it calculates its YouTube Music charts, and its ’24-hour debut’ records. From now on, paid advertising views will be excluded from both of them.

The change follows a recent controversy when Sony Music India claimed that artist Badshah had broken YouTube’s 24-hour-debut record, before it emerged that paid ads had played a role in his milestone.

“In an effort to provide more transparency to the industry and align with the policies of official charting companies such as Billboard and Nielsen, we are no longer counting paid advertising views on YouTube in the YouTube Music Charts calculation. Artists will now be ranked based on view counts from organic plays,” announced YouTube in a blog post today.

The post went on to explain that paid advertising views will also be excluded from calculations around YouTube’s rankings for music videos’ first-24-hour views.

“Videos eligible for YouTube’s 24-hour debut record are those with the highest views from organic sources within the first 24 hours of the video’s public release. This includes direct links to the video, search results, external sites that embed the video and YouTube features like the homepage, watch next and Trending,” explained the post.

“Video advertising is an effective way to reach specific audiences with a song debut, but paid advertising views on YouTube will no longer be considered when looking at a 24-hour record debut.”

Badshah’s ‘record’ caused a stir almost as soon as it was announced in a press release sent out by Sony Music India on 11 July. Headlined ‘Badshah’s PAAGAL breaks world record for most viewed video in 24 hours, races past Taylor Swift & BTS’, it described the video as a “viral sensation” that had reached 75m views in its first 24 hours, beating the previous record of 74.6m views for BTS’ ‘Boy With Luv’ featuring Halsey.

However, as doubts were raised in India about the milestone, Badshah revealed in an Instagram story that paid ads had played a prominent role in the first-day performance of his video.

‘Google Ad Words’ is actually an out-of-date brand now: the discussion since has focused on the use of Google’s ‘TrueView’ ads, which can be bought by labels to run music videos as ads before and during other YouTube videos, as well as on other websites.

Such campaigns would swell the view-count for a music video. YouTube has always excluded these ‘paid’ views from the data it supplies to official bodies in countries where YouTube streams count towards the charts (for example the US, where it provides data to Nielsen and Billboard.

However, since it didn’t exclude paid views from its own charts or its 24-hour-debut calculations, there was an incentive for labels to splash cash on TrueView ads – particularly in markets like India and Latin America, where the costs of buying those ads are lower.

“The whole f***ing industry does paid views,” said Mandar Thakur, COO of Times Music, at the All About Music conference in Mumbai in August. An earlier report by Bloomberg suggested the practice was widespread including for western artists, while a more-recent investigation by Rolling Stone highlighted the debate about this tactic in Latin America.

Now YouTube is making it clear that paid views won’t be used for its charts or 24-hour-debut calculations. The company provided Music Ally with its current list of the top 10 music videos of all-time under the latter metric. Badshah isn’t on it:

[There’s potential for further controversy here: Bloomberg’s report named a couple of those artists as also having used paid advertising, although not to the same extent as Badshah, but their totals remain unchanged.]

Music Ally talked to YouTube’s global head of label relations Stephen Bryan – the former Warner Music Group and SoundCloud executive – ahead of today’s announcement to get his perspective on the changes.

“We believe, and the industry is aligned with us, that YouTube is really the most powerful, accurate source of what is popular in music today. That really comes from the scale of our user base and the breadth of content and artists on YouTube,” he said.

“Our 24-hour records and our charts have always been, and increasingly are critical ways we recognise and celebrate the success of artists on our platform… We’re very focused on making sure that we maintain consistency and credibility in our records and in our charts, because we want our focus to be completely on the success of our artist partners, and their labels and management teams.”

Bryan stressed that today’s changes do not represent YouTube clamping down on TrueView ads for music videos. The service continues to see them as a legitimate tool in labels’ marketing armouries, as part of their wider digital marketing campaigns. It’s the misuse of TrueView to deliberately juice first-day figures and YouTube chart rankings that’s being dealt with.

“TrueView, within the industry, is an important part of many labels’ and artists’ promotional plans. We believe it continues to be something that the industry should use to connect in a very targeted way with their most important fans,” said Bryan. “Those fans can often become influencers on the platform for that content… so those targeted, early-stage campaigns, we believe, are really healthy for the industry.”

He also stressed the point about YouTube wanting to bring its own metrics into line with wider industry practices.

“Other charting companies around the world exclude any ad-based plays from their charts. Really this is about aligning our own charts and our own records with the industry-wide accepted methodology,” said Bryan.

“We think that being more transparent around this is really critical in maintaining the credibility. It just avoids any distraction from focusing on celebrating the artist’s success. We want to avoid any confusion or speculation around what’s in, what’s out… And it’s about ensuring that YouTube remains a level playing field, and that any artist around the world has an opportunity to succeed, reflected in our charts and in our records.”

One question Music Ally had concerned YouTube’s music charts, and what impact the changes will have on their makeup. One of the most interesting things about the charts, for example, has been the way Indian and Latin American artists have dominated the top 10.

Meanwhile, the most popular music track on YouTube that week was Reshammiya and Ranu Mondal’s ‘Teri Meri Kahani’, with its 138m weekly views way ahead of second-ranked ‘Señorita’ by Shawn Mendes and Camila Cabello. 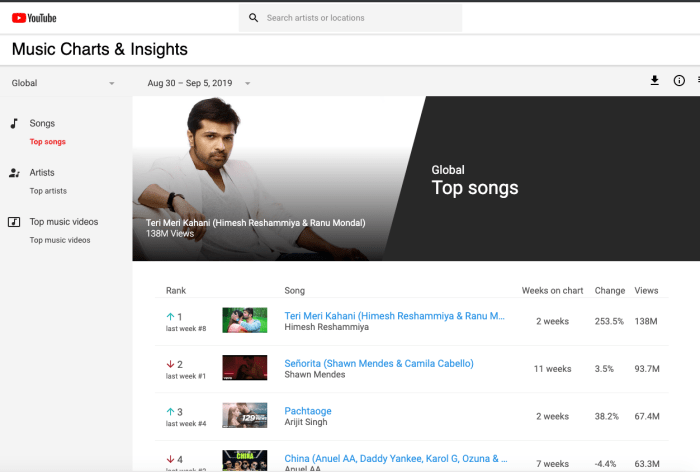 If paid views have become a particularly-important marketing tactic in Latin America and India – and, we’ll stress here, not an illegal one by any definition – does this mean artists from those territories might be charting lower in the future?

“The impact is minimal,” said Bryan. “We’ve looked at the charts historically, and we’ve always had a methodology that took into account a number of factors… This change will have a minimal impact on the charts, and what you see in the charts.”

YouTube has already been briefing labels on the changes. Bryan said that they have responded positively.

“This change is aligned with the industry’s overall view on chart credibility and what chart eligibility,” he said. “The way it’s been received in some of the early briefings we’ve done is: we’re on the right side of the industry, and it’s a very positive change.”

This seems a fair summary. YouTube isn’t banning labels from buying ads for music videos, nor is it suggesting that doing this is a nefarious activity. It’s plugging a loophole that labels (understandably) used to their artists’ advantage, in a way that should make the YouTube Music charts (and records) a more-accurate reflection of what’s popular.

One final point, though: the Rolling Stone feature on paid views raised a different incentive for labels to go big on TrueView ads when a video is released:

“Once you start getting some views, YouTube starts recommending the video, putting it up in the sidebar. If you don’t spend money on videos, it’s very hard to get them picked up by the algorithm, because everyone else is doing it,” said one interviewee.

Will labels face a dilemma now: if they rein in their first-day spending on YouTube ads, so as not to seem like they’re trying to game the charts system, could that handicap music videos when it comes to being ‘picked up by the algorithm’ on YouTube – if not in comparison to one another, perhaps to other kinds of non-music videos that are also being promoted using TrueView?

As with any seemingly-small change to digital platforms, there may yet be some unintended consequences ahead. Music Ally will be keeping an eye out to see what YouTube’s tweaks mean for labels and artists in the coming weeks and months.

Discord is testing its own integration of YouTube videos

YouTube has been taking down some of the big music 'bots' that stream music from its service into social app Discord. Groovy and Rythm shut down in August and September.
Read More

YouTube's chief business officer Robert Kyncl has been addressing the TV industry this week at the Royal Television Society Cambridge Convention. However, he had some figures that will be of intense interest within the music...
© Copyright Music Ally All rights reserved 2021 - Website designed and maintained by