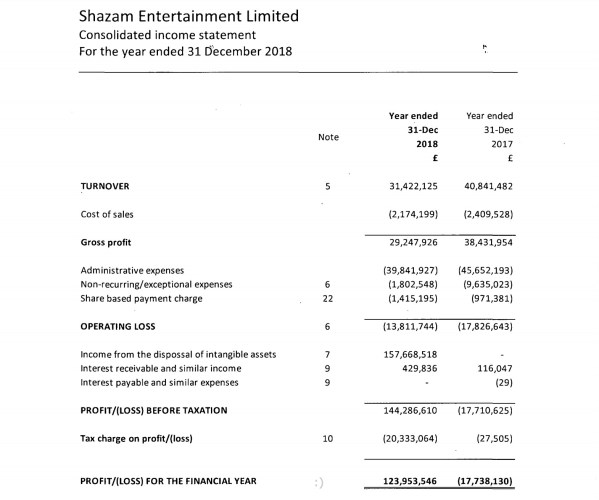 According to Shazam’s financial results for 2018, published through Companies House in the UK, the company recorded £157.7m of income from ‘the disposal of intangible benefits’ in 2018, with a note further on in the accounts specifying that £156.6m of that “relates to the proceeds from the sale of intellectual property net of the cost of disposal” with a further £1.1m relating to the value attributed to its workforce in the acquisition.

The financials don’t tell us much else useful about Shazam’s business in the year of its acquisition, although as in 2017, the company’s administrative expenses alone (£39.8m) outweighed its revenues. But balancing P&L is a thing of the past for Shazam now: the director’s note suggests “a reasonable expectation that the Company and the Group have adequate resources to continue in operational existence for the foreseeable future.” Well, quite.

Still, news that Shazam’s IP was valued at £157.7m (around $193m at the time the acquisition closed) in the deal does offer some insight into the latter period of a company once valued at more than $1bn. It may not have been the most triumphant exit, then, but Shazam’s strategic value to Apple in the years ahead isn’t something you can easily measure in financial results alone.

Russia’s invasion of Ukraine continues to have knock-on effects for Russian companies of all kinds who do business with western companies.