Audio-streaming service Mixcloud has published its financial results for 2018 through Companies House in the UK: and unlike in previous years, the accounts have been published without a small-company exemption, thus giving us an insight into the firm’s growth and profitability. 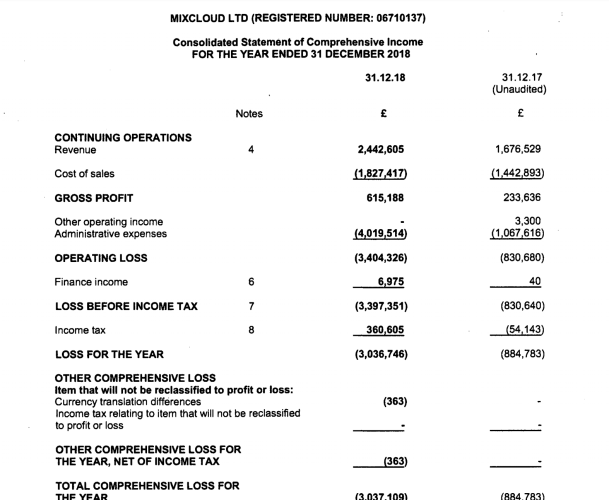 Mixcloud isn’t running out of money, mind: the company ended 2018 with net assets of £5.53m, as opposed to £1.35m at the end of 2017. “The directors have a reasonable expectation that the group will have adequate resources to continue meeting its liabilities and operating for the foreseeable future,” explained the company’s directors report. Mixcloud raised its first ever funding round in April 2018: reported as $11.5m from US media group WndrCo.

What are the factors impacting Mixcloud’s financial performance? The company signed its first direct licensing deal, with Warner Music Group, in October 2017 – having previously operated under radio-style blanket licensing. That deal was followed by an agreement with Universal Music Group in October 2018, then indie licensing-agency Merlin in November 2018. In December that year, the company launched Mixcloud Select, an option for individual channels / creators on its platform to charge monthly subscriptions.

That last announcement won’t have had much impact on the 2018 financials, of course, while Mixcloud’s launch of its service-wide ‘Premium’ subscription in July 2019 wasn’t a factor at all in the firm’s 2018 figures. That launch came alongside some new limits on free listening on Mixcloud. “Since we started building this platform, the royalty costs we pay for every person who listens for free have steadily risen. Today, the revenue that we make from advertising simply doesn’t come close to covering these costs,” said Mixcloud then. The 2018 financials offer some important context for that argument.