Music Ally has covered analytics firm Chartmetric’s concept of Trigger Cities before but at Sandbox Summit in London this week, we assembled a panel of marketing experts to talk about the idea in practice and how – or if – it is changing the architecture of their global campaigns.

Chaired by Isabelle Ljungqvist, digital marketing coordinator at Music Ally, it opened with Chaz Jenkins (partner and advisor at Chartmetric) walking the audience through the data and trends that led to the formation of the Trigger Cities idea.

His opening thesis was that so much music industry marketing is still about creating word of mouth – by not necessarily driving fans to record shops and DSPs.

Due to social media, the circles of influence we have today potentially stretch to millions of people and marketing has to adapt to this new global connectivity. “There are no borders any more,” he said. “But we [in the music industry] are still quite a regional industry.”

The focus on record companies historically was on the US and the UK primarily, occasionally expanding to parts of Europe, Australia and Japan. Jenkins called these “the old school markets” and said the focus of Chartmetric is on measuring influence in the countries that are most engaging (and engaging earliest) with artists – notably South America, Southeast Asia and Eastern Europe.

A key finding from its research was how we in the west are not using new media tools to their fullest extent – as other markets at the heart of the Trigger Cities idea – are. “We think we use social networks in the west,” he declared. “We don’t.”

An important difference in how social media is used in the West versus how it is used in the rest of the world is that those in non-Western markets are more supportive (rather than critical) of their friends’ taste.

“This makes these markets more volatile and viral,” proposed Jenkins, noting that when an act takes off there they can explode quickly on a global level. 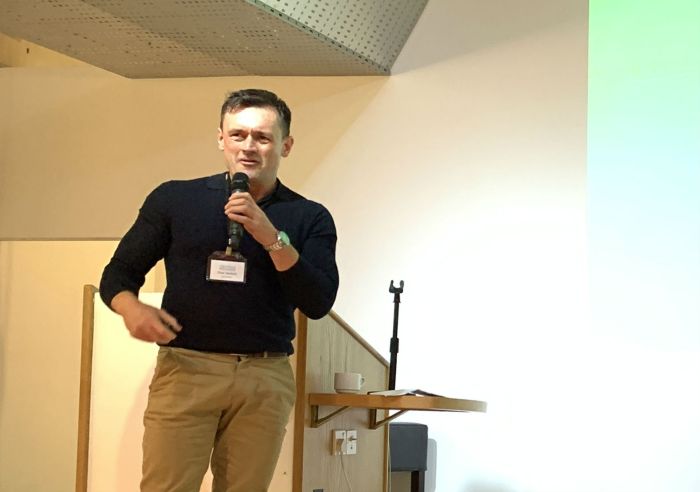 When picked up by the panel, the initial focus was on the new ways this can help acts hit scale.

Christine Osazuwa (senior data analyst, EMEA, Warner Music Group) said, “When you look at these trigger cities, two-thirds of them are over 5m people. So it’s a numbers game […] You are getting large volumes of people and are getting them to repeat listen.”

There are, she believed, clear budget incentives to focus in here on what works and to use this to fan the flames of a campaign, thereby ensuring marketing spend is not wasted.

“It’s a marketing 101 idea where it’s cheaper to get an existing customer to do something than it is to acquire a new customer,” she said. “Where you have cities like those where people are eager to listen to new music, they are eager to become a fan and they are eager to repeat listen. [That means] you get this fantastic virality that can happen without even noticing sometimes because they are on platforms that people are not [always] looking at; its not Spotify and it’s not YouTube, as they are on QQ Music and the other DSPs.”

The trick, then, is being able to export that virality back to home territories.

Dan Griffiths (senior director, digital marketing, The Orchard) talked about how spend was apportioned in the relatively recent past.

“An artist might have a marketing budget of £2,000 and they point that at a country or several countries,” he said. “The conversation will escalate and then you will say you should add in Germany and France to that and then all of a sudden you have diluted your budget to be not very much at all.”

Jenkins picked up on this and talked about the cost effectiveness of putting marketing and advertising spend into Trigger Cities. “£2,000 in an Indian city will go a lot further than £2,000 in London,” he said, adding that the industry needs to rethink its approach towards ARPU when looking at the emergence of these powerful new taste-making cities.

“People might think that the ARPU [in India] is so low that there is no point spending money there,” he proposed. “That’s fine, but the commodities I am looking at creating there are buzz and influence – and creating it rapidly. And you can do that with £2,000 in a city where people really get behind an artist on social networks and share content on streaming services. It is much more difficult to see a result in the UK. The ARPU there might be higher, but I want to get a lot of people in one area behind an artist as that is going to help them grow virally all over the world – not in one place. The ultimate goal is much bigger.”

Osazuwa ran with this idea of the new cost-effectiveness of consumer acquisition.

“Fans here are more willing to share and more willing to listen,” she said of Trigger Cities. “Even if you are in a situation where you are acquiring fans that are not profitable now, they are triggering other fans. All of a sudden you have a large and strong fanbase that are doing things that are profitable to you – such as sharing on social media like Twitter, Facebook, Instagram and TikTok where that is generating more revenue for you than you would have originally got if you had gone to the US and sprayed a load of money at different cities [there].”

Jenkins said that a major change to the dynamic of marketing is that it has to be about steady build rather than flash points as the latter delivers short-term benefits but causes long-term problems.

You don’t want to spike with a track or an artist, was his advice here. You can buy your way to success but typically it is short-lived. You need to be growing solidly and continuously. If you see a decline in trajectory, that is a time when you need to do something about it.

“Algorithms are looking for constant trajectory,” he says. “Algorithms know that something that spikes falls away very quickly afterwards. That is not a very good return on investment. Your investment is much better spent on slowly and steadily building and – crucially – retaining your audience.”

Griffiths talked about the strategy behind afro bashment act NSG and how that relates to the Trigger Cities concept. Grime and afro bashment typically does best in London, Birmingham and Manchester and while Birmingham and Manchester might not be seen as Trigger Cities they are where conversations are starting and therefore are a good starting point for an act like NSG in the early days.

He said the plan was to spend money there rather than across the UK and then build word of mouth from that, building them up to a country level. He says the success of their track ‘Options’ early in the year was down in part to this strategy. 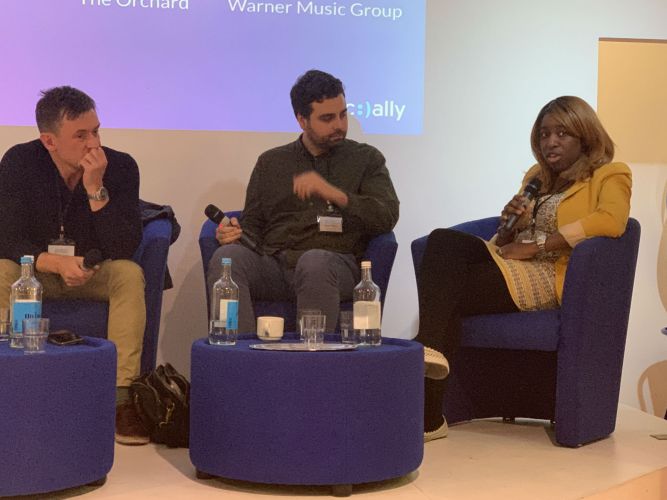 Osazuwa turned the focus on localisation. “You have to understand the cities and you have to understand the nuance there,” she said, emphasising the importance of having a good knowledge of the social media channels and DSPs in these cities and how they operate. The priority has to be around making an authentic experience for the fans in those locations and being carefully attuned to the cultural trends that are unique to those cities. Simply put, things will not work there if the plan is to just throw money at these cities.

Jenkins gave some insights into genres around Trigger Cities around Chartmetric data. Pop with male voices tends to work well in Southeast Asia but hip-hop is a disaster there due to profane lyrics clashing with religious sensibilities. India is seeing a boom in EDM (“They have a thirst for music they weren’t able to get hold of before”) and Eastern Europe is heavy on dance pop with female voices. Rock remains a hugely important genre in South America. And Turkey? “In Turkey they love everything,” he said. “Absolutely everything!”

Measuring effectiveness, however, still remains a problem. Griffiths said the main goal of marketing is to encourage fans to consume music – but the issue is how we get there them.

Osazuwa felt that listeners rather than pure listens is the most important thing to aim towards. “I am less concerned about 1m streams as I am about 1m listeners,” she said, saying that a user is more valuable if they return – and central to this is the lifetime value of a consumer.

Jenkins warned against looking just at the revenue figures in order to measure success. “Of course the revenue fluctuates in different markets considerably,” he said. “It’s about using other individual metrics such as all this wealth of different forms of engagement you have to really gauge whether you are performing or not.”

Griffiths made the point that different parts of the industry will be using different success metrics in these Trigger Cities and that both thinking and operating in silos is reckless.

“As an industry we are very guilty of looking after our own success,” he argued. Labels and distributors are typically looking at ROI in terms of streams but managers often have a different set of metrics to base ROI on, most notably live; so spend in Trigger City X might not drive streams but it could open things up for touring. He said we need to understand the lenses that different parts of the industry is looking through.

Jenkins ended by saying that the next Chartmetric study will move on from Trigger Cities and instead focus on the concept of Trigger Boys and Trigger Girls, applying many of the same ideas but stretching them across demographic categories.

“Particularly with the 15-, 16- and 17-year-old female fans, it’s a demographic that behaves like consumers in many of the places that we regard as Trigger Cities,” he said. “That is because the share music and they are completely digitally native. The Trigger Boy demographic is slightly older and certainly much more niche.”

When Chartmetric publishes its Trigger Girls & Trigger Boys report we will, of course, cover its key findings. For now, you can read the company’s series of blog posts outlining the concept here.

Analytics firm Chartmetric has published its trends report for the first half of 2021, analysing the fastest growing artists on various streaming services and social platforms. Spoiler: Olivia Rodrigo had a decent six months!...
Read More 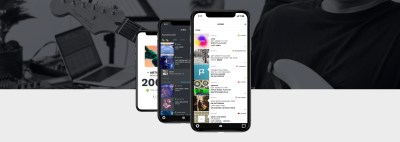 ForTunes is a platform which puts comprehensive analytics and recommendations at the fingertips of creators. Florian Richling, co-founder and CEO, says that he identified the need for his platform over the 20 years he...
Read More 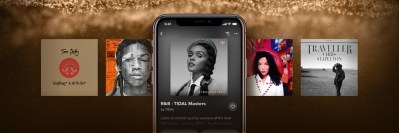 Square boss sees analytics as a big opportunity for Tidal

Fintech company Square is the new majority owner of Tidal, and its CEO Jack Dorsey (also CEO of Twitter) got together with Jay-Z for a Twitter Spaces discussion of their plans for the music service. Variety has a good...
© Copyright Music Ally All rights reserved 2021 - Website designed and maintained by