In Berlin, talk around music usually takes two paths: techno or the blockchain, and both involve a lot of earnest nodding. At the Most Wanted: Music 2019 conference, conversation was nudged towards the creation of new value streams, pushing for meaningful diversity, and embracing change in an age that demands it.

On the topic of finding music’s true value, Scott Cohen, chief Innovation officer for Recorded Music, WMG, was blunt: “We devalue music when we say that it is captured in a download or a streaming rate. We are not capturing the value by simply monetising the stream… the meaningful value isn’t being passed back to us.”

Instead, he argued, new technology will create new revenue – as long as the industry thinks more boldly and inventively. Cohen cited two examples: the ubiquitous blockchain, and VR – despite the VR content being, “not yet great.”

He described the music industry’s virtual-reality offerings – often opportunities to virtually observe gigs – as underwhelming when compared to how the gaming world has engaged with sport, where gamers can virtually play alongside their heroes. Current music offerings, he said, allow you to, “do anything except participate – I want VR to be something unreal, not just mirror reality. If I want to see a gig, I’ll go to a gig. I don’t want to watch it, I want to be it.”

He pictured a future where we live our dreams, segueing neatly to a WMG hardware investment. “Imagine using an AI-powered instrument like the Artiphon: you put the headset on, and you’re suddenly onstage with Led Zeppelin. And then, without ever having played a note before, you can take over the solo on Stairway to Heaven in front of a stadium crowd. That’s a lot more compelling.”

While buzz around blockchain technology has waned, he said that WMG is, “all-in” with “many proof-of-concept projects underway, including with BitFury’s Surround.”

He later clarified to Music:Ally just how revolutionary WMG considers it. “Initially, blockchain technology will be a better way to capture rights and create a single source of truth, tracking, and smart contracts – but ultimately it will create new value for WMG. And if an area of the industry can be replaced by a blockchain protocol, that area needs to find a new way of creating or adding value, fast.”

Finally, in the wake of Deezer trialling user-centric payouts to artists, Scott said that WMG have, “looked at the data but user-centric payouts don’t make an enormous change. That mythical person who repeatedly streams only one artist a month [and thus should give all of one month’s subscription money to that one artist] doesn’t really exist. But we’re not against it – if people want it.” 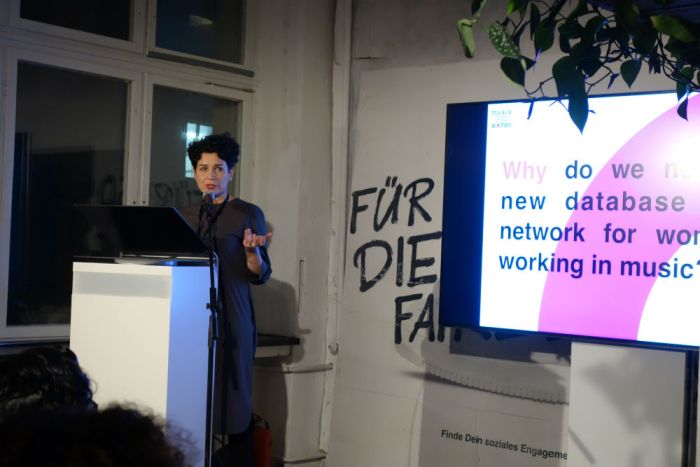 Meanwhile, MW:M19 – a signatory of the Keychange initiative – proudly announced that it had achieved a 50/50 gender balance in both its speaker line-up and its staffing, and diversity was widely discussed.

But in Germany, the world’s third biggest market for recorded music, there is still plenty left to do, said Andrea Rothaug, founder of Music Women Germany, a national umbrella organisation for women in the music industry. She had a firm rallying cry: “We want 50/50 – anything else is out of the question.”

In Germany, as in many countries, representation of women in the music industry is low, and the data is damning. “In 2015, only 7.4% of the companies in the VUT (the German independent music association) had women in senior positions. In 2016, the gender pay gap varies between 22-64%. And of mainstream German festivals, only about 10% of artists are female,” she said.

Andrea detailed structures and partnerships that other countries and cities can copy. National networks like the VUT’s Music Industry Women can partner with local network sponsors like Berlin Music Commission to initiate change. By providing a platform for women that generates jobs, databases of talent, training and opportunities, her ambition is that, “we don’t hear, ‘there are not enough qualified women’ ever again.” 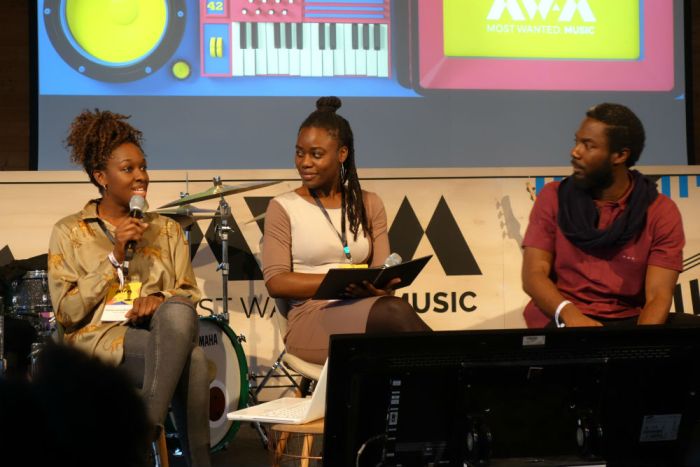 ‘The whole team needs to be African: the producers, the label, everyone’

The current wave of music emerging from Africa – some of the most exciting and innovative in the world – has new heights of mainstream recognition after Beyoncé’s collaborations with the likes of P2J and WizKid. Now the challenge is to move beyond labelling, and to build experienced African-staffed music businesses that cement African pop’s place in the world.

For Pamela Owusu-Brenyah, A&R for UMG’s Afroforce1 Records, change has been rapid: “When I started DJing in 2013, people just wanted ‘African Music,’ but now people request artists by name, or ask for specific genres,” she said.

MOBO-winning artist Bondzie “M3nsa” Ansah, of FOKN BOIS, added that the impact of technology will continue to be fundamental:

“If FOKN BOIS didn’t have social media, mobile phones and the internet, we’d struggle. We had to take charge of our business and art and put it out there. In Ghana [mobile] data is the most important thing to young people.“

Bondzie wanted conversation about African music to focus on its nuance and excitement, but worried that the movement’s momentum is in danger of dissipation by pigeonholing.

“I hate ‘Afro- this’ and ‘Afro-that’… it’s all just pop music. The more we break things into small clusters, the harder it is to establish ourselves in the industry. We need to work together: you can call yourself ‘Afro-Trap’, but if you go on Spotify, it’s under the banner of ‘Afrobeats’. The question now should be – how do you make yourself findable on streaming platforms? The answer is to collaborate with musicians, management, clothes makers – everyone.”

Pamela agreed – “collaboration is essential – and the whole team needs to be African: the producers, the label, everyone.” 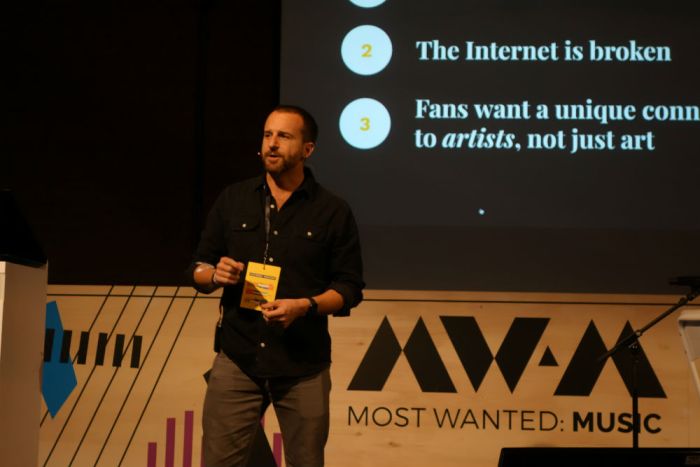 ‘The Internet Is Broken’

The value of music and where artists fit in that valuation is still not entirely clear. “The Internet is broken,” – or, as Wyatt Jenkins, SVP Product of Patreon put it, as he warmed to his theme, “it’s fucked.” In 2019, art has a high value, but that does not necessarily equal money: “When people stare at their phone, they’re staring at art… but do we understand where the money goes when we watch a Youtube video?”

The current model is no longer relevant, he continued: “We have an ad-fuelled attention economy that turns art into content. Companies see art as something to drive ad revenue – but the artists aren’t seeing much of the spoils.”

Value is a complicated term in 2019: the artist has to decide whether the value is in their music, or in them as a personality or brand. “The value is very personal: some artists want to keep a distance between them and their fans, yet a lot of artists love interacting with fans… but Patreon found that those who shared more with fans are more successful.”

Perhaps 2019’s wooly meaning of “value” is an entirely modern phenomenon: we are now all atomised individuals, and the pressure is on the artist to figure out their unique value point – and how to best monetise it – themselves. 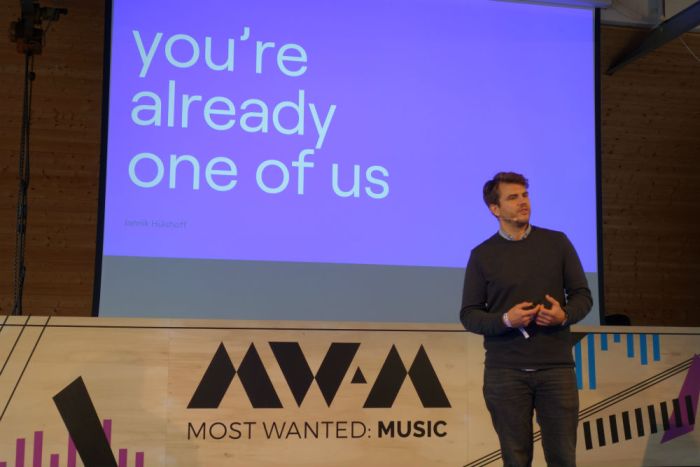 It’s not about the music, it’s about the person playing it

The May launch of Twitch Sings saw karaoke-style contests of streamers crooning for the camera to win over an audience. But what about professional artists? What’s more important for Twitch viewers: the Twitch-streamer’s personality and brand, or their music and their performance?

Judging by the examples given by Jannik Huelshoff, Head of Twitch’s DACH partnerships & content, the value lies in the Twitch viewers’ connection with a personality, not the music. One example that Jannik gave – Panic at the Disco’s Brendon Urie reacting to a video of a fan, who was in turn reacting to a video of him – may make some feel like we are truly through the looking glass. But for the traditional music industry, it’s an example of how it must now engage with large, and non-traditional, music audiences.

It’s worth noting that the “personality” fans connect with around music may not actually be the artist, Jannik explained: “Videos of festival performances could be narrated by fan-personalities, listening sessions could be discussed by the artist’s community, or artists could play new music and get immediate feedback.”

At this stage, music on Twitch is like gaming on Twitch: it’s not about the game, it’s about the personality playing it. Introverted artists need not apply, but their enthusiastic fans might jump at the chance. 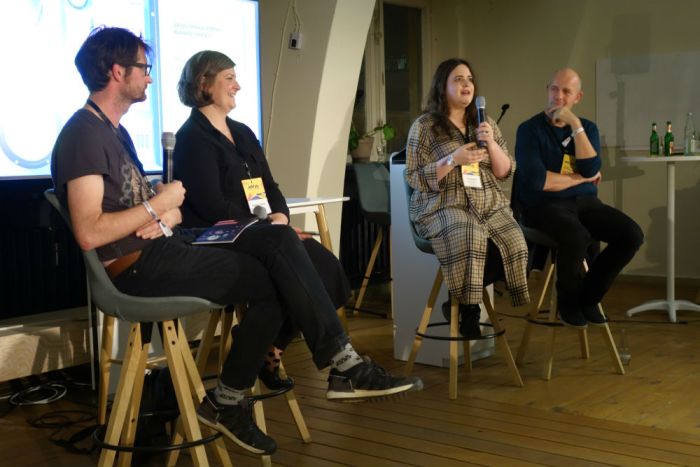 One of the tasks of the manager is to join the dots between value, fan experience, and success – and also to find a way for them to get paid too. Paul Bonham, of the Music Managers Forum, spoke about its recently-unveiled report, at what he thinks is, “an evolving and really creative time to be a manager.”

However this means that managers may also need to stump up cash: “A manager’s job is to be a business developer and find money from other sources, but so much is expected of a manager now that investing their own money may be unavoidable. So we also need to make sure the manager is remunerated later.”

Sophie Mathes, Founder of Pennywine Entertainment, said that they invest money if they feel the need, “but we have also worked with artists to help them create a plan to take to a bank to raise a loan.”

On the other hand, Per Kviman, CEO, of European Music Managers Alliance, said that as a manager, he tries to avoid investing too much money in artists, and looks for another option like an IP share. A manager must also look after their own income: “the artist owns the brand, and could leave for another management company tomorrow – so the management should insist on commission regardless of what an artist’s income stream is at that time.”

Are music streaming services’ recommendation algorithms biased towards male artists? It’s a question that has been raised before: most notably in The Baffler’s Spotify-focused ‘Discover Weakly’ analysis in 2018. Now...
Read More

YouTube under fire over music video with anti-Asian lyrics

The recent murders in Atlanta have focused attention on anti-Asian racism in the US. Now YouTube is embroiled in a controversy about a music video by artist YG that includes anti-Asian lyrics. ‘Meet the Flockers’...
© Copyright Music Ally All rights reserved 2021 - Website designed and maintained by