The UK was the third largest recorded-music market in the world last year, according to the IFPI, with £1.05bn (around $1.4bn at the time) of trade revenues in 2018. For streaming specifically, it was the second biggest (ahead of Japan), with streaming accounting for just over 49% of the total. Now industry body UK Music’s new ‘Music By Numbers’ report has fleshed out the British music industry’s economic contribution – which goes well beyond just recordings.

The headline number is the £5.2bn that the music industry contributed to the UK economy in 2018, with £1.1bn coming from the live-music business. Even without a Glastonbury Festival in 2018, the financial contribution of the concerts and festival sector grew by 10% from 2017. Meanwhile, the total export revenue of the music industry was £2.7bn in 2018, while music tourism – in part driven by festivals – contributed £4.5bn to the UK economy, up by 12% year-on-year. These are direct and indirect revenues, which is why they don’t add up to the headline figure of £5.2bn, if you’re wondering.

What about the recorded-music business? According to UK Music, that contributed £568m in GVA (gross value added) to the UK economy in 2018, up 5% from 2017. It also drove £478m in exports, up 8% year-on-year. UK Music added that label revenues rose by 3% last year, the third consecutive year of growth. And as the music sector thrives, so too does the number of people employed across the industry: an all-time high of 190,935 people in 2018.

(Caveat: there are some differences here compared to previous economic studies by UK Music: for example adding in the impact of the retail sector; expanding the data it gathers from affiliated industries including law and accountancy; and now including numbers for producers and engineers in its existing ‘music creators’ category, alongside musicians, singers, composers, songwriters and lyricists. Collectively, this category contributed GVA of £2.5bn, and £1.1bn of exports.

(One key point made by UK Music’s report: “It is important to understand these figures do not reflect the financial struggles of many music creators. A small proportion of creators in the industry do earn exceptionally well. However, according to the Office for National Statistics (ONS), musicians earned an average income of £23,059 in 2018 – well below the national average of £29,832.” The report includes case studies of performers, writers and producers, breaking down their main income streams).

UK Music’s report coincided with a new report from consultants OC&C, commissioned by the UK’s Entertainment Retailers’ Association. It makes forecasts about how the UK music-streaming market might grow in the years ahead. And? It predicts that the market will grow from £829m in 2018 – this is retail spend rather than trade revenues – to £1bn-£1.1bn in 2023. However, the 80-page report – which is not being released publicly – suggests that streaming services may be missing an opportunity for bigger growth to up to £1.6bn by 2023.

How? “More innovation in services could result in a potential £500m boost to the market. These range from creating new premium tiers and new entry points to paid streaming to offering the ability to access streaming services without taking out a subscription,” claimed ERA’s announcement. The latter include models like ‘content micropayments’, virtual gifts and integrated tuition or sheet music for musicians. Meanwhile, OC&C thinks that the new premium tiers could include “exclusive access to additional content, merchandise, live events and ticket pre-sales”, adding that the sweet spot for pricing might be “1.3X – 1.6X standard pricing” – so, £12.99-£15.99 compared to a regular £9.99 streaming subscription.

This emphasis on what could be done next, rather than simply celebrating the current growth, is a welcome element to UK Music’s report too. That study ends on the areas the music industry wants government and policymakers to focus on. They include: calling for business rate relief for grassroots venues; better copyright protection; shared parental leave for the self-employed in music; international trade support; improved funding for music education; inward investment and fiscal support for SMEs; and the need for a single EU-wide live music “touring passport” to ensure UK acts are not shackled in the aftermath of Brexit.

The dreaded b-word aside, the report will make for useful reading well beyond the UK’s borders, with its insight into how the different parts of the music industry sit within the wider economic picture, and where the growth engines are. 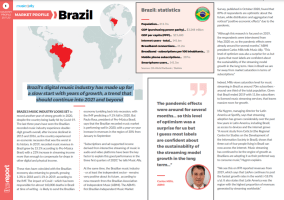 Brazil’s digital music industry has made up for a slow start with years of growth, a trend that should continue into 2021 and beyond
Read More

British industry body the BPI is trying to expand its membership, particularly from labels and music companies owned by people from "underrepresented" communities in the current industry. That means "women, people from...
© Copyright Music Ally All rights reserved 2020 - Website designed and maintained by