2019 has been a good year for creative music-marketing campaigns, as you’ll know if you read our end-of-year Sandbox report earlier this month. If you haven’t, you can find it here: it’s our pick of the best campaigns of the year.

Anyone looking for more inspiration for their music marketing in 2020 would do well to check out the winners of the 2019 Clio Music awards. The event aims to spotlight content and campaigns that “push boundaries, permeate pop culture and establish a new precedent for artist self-promotion, music marketing, brand collaborations and the use of music in advertising”. 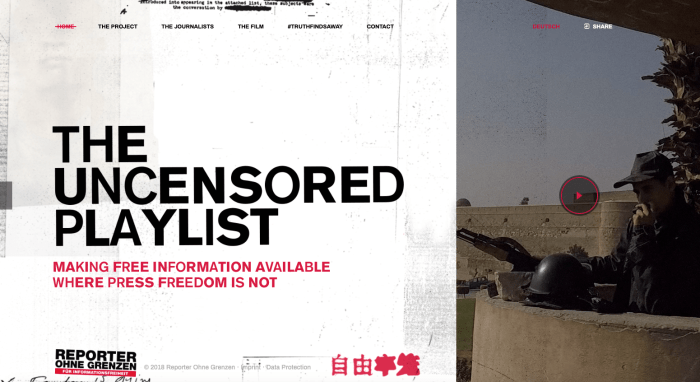 There were two Grand winners this year. The first was a project called ‘The Uncensored Playlist‘, entered for Reporters Without Borders by agency DDB Group Germany. It won its Grand award in the Innovation medium, while also bagging Gold awards for Social Good and Use of Music.

It was launched as “the world’s first playlist that fights censorship”, turning articles from five journalists in countries with repressive censorship into ‘songs’ uploaded to streaming services, and gathered in a playlist that launched on World Day Against Cyber Censorship.

The second Grand winner was ‘Share Your Gifts’, entered by Kobalt Music Group. It was the Christmas advertisement for Apple in 2018: an animated commercial using Billie Eilish’s track ‘Come Out And Play’ – for which Kobalt is the publisher. The ad won its Grand award in the Use of Music medium.

The Clio Music awards also gave out 29 Gold awards, including the two for The Uncensored Playlist. The directory of winners (which also includes Silver and Bronze gongs) is well worth a browse.

Some of Music Ally’s favourites within the Gold winners include: another project involving Billie Eilish, Spotify’s pop-up Billie Eilish Experience, entered by the streaming service and getting its Gold award in the Design medium.

You can see the full list of winners at the Clio Music site. Entries for the 2020 edition of the awards will open in the first quarter of next year.

It can be hard to follow the various legal cases and judgements around Apple and its App Store across the world. We've reported recently on a law in South Korea forcing all app store owners (not just Apple) to allow...
© Copyright Music Ally All rights reserved 2021 - Website designed and maintained by