Spotify is launching a new feature aimed at songwriters, giving them their own profile pages on the streaming service, complete with playlists of recordings of their songs.

‘Songwriter Pages’ launches in beta today, accompanied by a tweak to Spotify’s existing track credits feature to make the names of songwriters taking part in the beta clickable, taking listeners directly to their pages.

Missy Elliott, Justin Tranter, Meghan Trainor, Fraser T Smith, Teddy Geiger and Ben Billions are among the first songwriters accepted onto the beta. Spotify said this afternoon that “only a limited number” of songwriters are on board, but it has launched an online form for others to register their interest.

Each songwriter page will include a list of the songs they have written, as well as their regular artist collaborators. There’ll also be a ‘Written By’ playlist for that songwriter, which listeners will be able to find through Spotify’s search feature.

(It’s unclear at the time of writing whether those playlists are automatically generated by Spotify, or manually curated by the individual songwriters.)

“The launch of publicly visible songwriter credits on Spotify in 2018 was merely a first step. Together with the publishing industry, we’ve continued to evolve our data sharing and analytics efforts, and are proud to unveil this next iteration,” said Jules Parker, Spotify’s head of publishing and songwriter relations.

In its blog post announcing the news, Spotify added that since the launch of song credits in 2018 “we’ve seen a 60% increase in how often labels and distributors credit songwriters on their new releases”.

The songwriter pages are a welcome move, although clearly one that will be more meaningful when it opens up beyond the limited number of songwriters who are part of the beta test now. 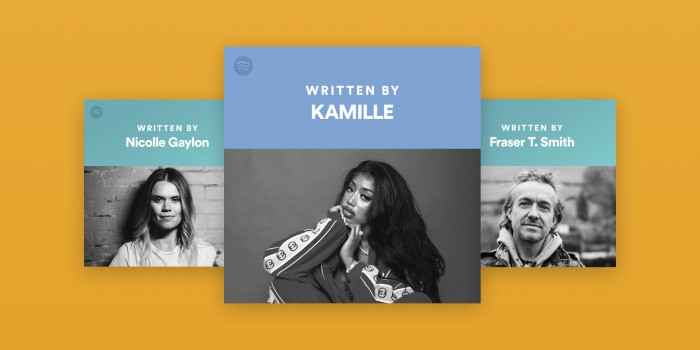 At the same time, today’s news won’t make Spotify’s critics within the songwriter and publishers world forget about the streaming service’s past (and indeed ongoing) tensions with these communities.

For example, we’re still awaiting a decision on the appeal launched by Spotify, Amazon, Google and Pandora last year against new songwriter royalty rates set by the US Copyright Royalty Board – an appeal which generated fury within the publishing community.

Those tensions were further inflamed in June last year, when Spotify announced that it had “overpaid most publishers” in 2018 under those CRB rates, and would be recouping that overpayment through the end of 2019.

“I find it so hypocritical for a digital service that is appealing the CRB decision to then take advantage of the parts of that decision that benefit it,” said David Israelite, boss of US publishers association the NMPA, at the time.

2019 also saw Spotify end up in court with publisher Warner Chappell in India, over a licensing dispute around the streaming service’s Indian launch – complete with a war of words that saw a WMG statement describe Spotify’s public comments on the matter as “appalling”. The two companies settled that dispute in January this year, as part of a global licensing deal.

Past songwriter-led lawsuits against Spotify over mechanical licensing in the US are still fresh in the mind, while all of these disputes came against a backdrop of wider unrest among songwriters about the royalties they get from music streaming.

That’s an issue with the respective shares of streaming royalties taken by labels (for master recordings) and publishers and collecting societies (for songs) – debate about which is an industry-wide, rather than Spotify-specific issue.

Still, for all these reasons, today’s announcement is unlikely to be greeted with universal acclaim within the songwriting community. Expect some snappy ‘clickable credits and songwriter profiles are nice, but more royalties would be nicer’ comebacks.

Here’s the nuanced view. Parker and his team are working hard to give songwriters more prominence on Spotify, as well as forging partnerships with publishers to help them make best use of features like Spotify Publishing Analytics, which launched in November 2018.

Our point, though: it’s no contradiction at all for songwriters and publishers to welcome the work being done by this team within Spotify – credits, profiles, analytics etc – while continuing to press Spotify on the bigger policy issues like the CRB rates appeal.

Songwriter Teddy Geiger is a good illustration of this. She’s one of the first people taking part in the songwriter pages beta, but she was also one of the “hurt and disappointed” signers of an open letter to Spotify in April 2019 calling on the company to drop its CRB rates appeal.

“Growing up, I looked at the back of my favourite albums to see who was involved in making them – from writers and producers to the engineers and instrumentalists. Those credits inspired me to explore making music and it’s great to see Spotify supporting the work that we all do behind the scenes,” said Geiger, in one of the supportive quotes for today’s news, provided to journalists by Spotify – Meghan Trainor, Fraser T. Smith and BMG’s director of digital strategy Christopher Ludwig were the others.

We suspect a few more signers of that open letter last year will also be on the songwriter pages beta: like Geiger, they’ll be happy to use (and praise) new songwriter-focused features launched by Spotify, without that compromising their willingness to criticise the company over other issues that are important to their community. And that’s a good thing.

GESAC is joining the fray with its ‘Study on the place and role of authors and composers in the European music streaming market’ study.
Read More