Sometimes the statistics around how many people are streaming music – and how many are paying for it – can lead to confusion and misinterpretation.

Recently, for example, we’ve seen one story suggesting that Amazon was “on course to overtake Apple Music” based on comparing an Amazon figure from January 2020 with one from Apple that hadn’t been updated since June 2019.

Another story claimed that “Pandora has overtaken Apple for second spot” in subscriber rankings, which mistakenly compared the former’s number of active listeners (most of whom don’t pay) to the latter’s paid subscriber count.

So, we’re trying something that will hopefully be useful: a post that we’ll update whenever a major streaming service updates its public numbers.

Caveats: we’re relying on the numbers given out by the streaming services. As industry lawyer Kevin Casini recently pointed out on Twitter, there can be debate about (for example) how those services define ‘paid’ subscribers. In other cases, the boundaries between active and registered users can be purposefully unclear.

Even so, it feels like it would be useful to have all the public numbers in one place. So here they are, with links back to the sources for the figures, and a changelog at the bottom detailing the updates.

If you’re a streaming service and have spotted that your figures are out of date here (or if we don’t have them at all!) please do email me so I can update the article accordingly.

In June 2019, Apple announced that there were 60 million people paying for an Apple Music subscription. It hasn’t updated the figure publicly since then, although in the first half of 2019 it had added around two million net new subscribers a month. That means it should have passed 70 million by the end of 2019, and perhaps has more than 80 million now in July 2020.

In January 2020, Amazon announced that its music streaming service now “reached more than 55 million customers globally“, with its music boss adding in a Financial Times interview that “nearly all” of those people were paying for a subscription. This includes people using Amazon’s Prime Music tier, which is part of an Amazon Prime membership.

Chinese firm Tencent Music has three different music streaming services, and at the end of March 2020, it had 657 million mobile monthly active users of those services, including 42.7 million ‘paying users’ – that includes people buying music, as well as subscribing.

This one’s complicated. In February 2020, YouTube’s parent company Alphabet announced that there were more than 20 million subscribers to YouTube Music and YouTube Premium combined – the latter includes YouTube Music. As for non-paying users, in May 2018 YouTube revealed that “more than 1 billion music fans come to YouTube each month to be part of music culture and discover new music”. That figure hasn’t been updated recently though.

SoundCloud’s advertising site says that “each month, we also reach more than 175 million global users“. This figure has remained unchanged for years – we’ve got press releases from 2014 with that stat. The figure includes SoundCloud’s own site and apps, but also people who hear tracks embedded on other websites.

Deezer has 16 million monthly active users according to its press releases. In January 2019, when we interviewed CEO Hans-Holger Albrecht, he said that the company had ended 2018 with seven million subscribers. That included people who got a Deezer subscription bundled into their mobile contracts, but Albrecht said that 75% of Deezer’s revenues came from ‘self-pay’ subscribers, not telco bundles. It’s likely more than seven million subscribers now, in July 2020, but the company has not publicly updated the figure.

Indian streaming service Gaana announced in February 2020 that it had reached the milestone of 150 million active users in December 2019 – according to a profile in the Wall Street Journal, the updated total in February was actually 152 million. A December 2019 report by LiveMint cited a company spokeperson as saying Gaana had “more than 1 million subscribers” at that time.

Gaana’s big rival in India, JioSaavn, had 104 million monthly active users in April 2019, according to ‘sources close to the company’ who talked to Music Business Worldwide.

In March 2019, Middle Eastern and North African streaming service Anghami had more than 21 million monthly active users, and “a significant number over 1m” who were paying for the service, according to co-founder Elie Habib in another MBW interview.

And now some global stats…

In May 2020, global music industry body the IFPI published its latest Global Music Report, which revealed that at the end of 2019 there were 341 million ‘users of paid streaming subscriptions’ globally. This includes people on family plans who aren’t actually paying themselves.

Another useful source is consultancy Midia Research, which regularly updates its estimates both on the global subscriber total, and the shares of individual services. It estimates that at the end of March 2020, there were 400 million music subscribers globally. Here’s its breakdown: 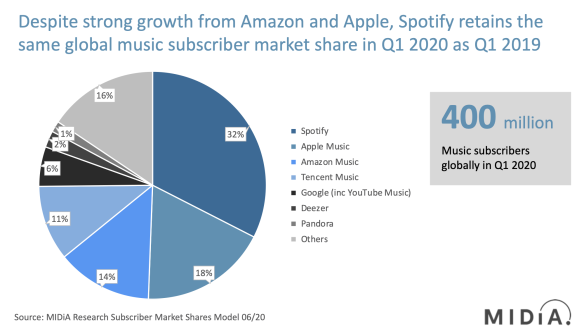