Over a series of articles for US journal The Baffler, journalist and critic Liz Pelly has examined the culture and dynamics of music streaming in general and Spotify in particular.

In Discover Weakly, Unfree Agents, Streambait Pop and Big Mood Machine, she offered some of the sharpest criticism of Spotify’s business, its impact on musicians and its effects on music culture.

Pelly’s keynote at the recent by:Larm conference in Oslo drew on all four articles, as well as other strands of thought, to call out the problems she sees in the streaming era.

Or as she put it: “A streaming environment where music is increasingly susceptible to some of the same challenges as journalism in the age of clickbait… and also issues around surveillance and privacy, and new ways that music listening data has been commodified and sold to advertisers and marketing firms”.

Pelly has been writing about music streaming since 2016, when she was exploring a piece about major labels’ influence on streaming playlists, but decided that this was “just the tip of the iceberg: there are many other ways in which the streaming economy represented a way of commodifying and marketing music that serves to benefit the platforms much more than the artists”.

She added that while this logic has been applied to big tech companies like Apple and Amazon (in terms of music being used to sell their other products, from iPods to smart speakers) she also thinks it can be applied to pureplay music service Spotify.

“Spotify is also in the business of selling advertisements. The decontextualisation of music, and the recontextualisation into playlists of mood, activity and effect, has caused a paradigm shift in music. And it should be understood that this shift is also largely made as a strategic part of Spotify’s long-term vision for its advertising business.”

She cited Spotify’s work since 2015 in enabling brands to target ads by activities and moods – discussed in this AdAge interview – as well as its 2016 partnership with advertising giant WPP to give its agencies “first-mover access to Spotify’s mood data” for their clients.

“In Spotify’s world, the commodity being sold is not music itself. Rather, it prefers to frame the commodity that they are selling to advertisers as users’ moods and emotional states, as their listening habits, as its behavioural data,” she said.

“If certain moods like chilled, focused and happy are what’s valuable to Spotify’s advertisers; if it’s good for business for Spotify to maintain certain moods on its platform; if that is increasingly what its personalisation and discovery tools are in service of, then this has immense impacts for artists and listeners.”

Spotify isn’t solely driven by its advertising business, mind. At the end of 2019, it had 153 million ‘ad-supported MAUs’, compared to 124 million premium subscribers. However, those subscribers generate 88% of the company’s revenues, while advertising only accounts for 12%.

It could be argued that if it’s good for business to maintain certain moods on Spotify, that’s because it drives subscriptions, rather than value for advertisers. However, Pelly’s argument about some of the music that has succeeded on Spotify generated plenty of nodding from the by:Larm audience.

“Over the years, it has become clear that the platform largely rewards music that does well in the background, as opposed to the foreground. Music that can remain a background experience, like emotional wallpaper, as one independent label owner described it to me,” she said.

“This has led in general to an aesthetic flattening, as one independent label owner told me: ‘The more vanilla the music, the better it works on Spotify’. There is a least common denominator effect at play, both in terms of the types of artist who find success, but more generally, just in terms of the types of songs that can survive in this environment.”

During her keynote, Pelly drew on the writings of a number of other critics of the streaming economy: for example Damon Krukowski of Galaxie 500, who puzzled over why the band’s album track ‘Strange’ was markedly more popular than their other tracks on Spotify, and concluded that it was because it sounded (in Pelly’s words) “most like other songs”.

“By design, the data-driven playlist environment favours the sounds that sound most seamless, the most unobtrusive, the most passive, and the most unlikely to cause a skip. Or songs that most fit into its prized genres of playlists like ‘chill’,” she said. This is what Pelly wrote about in her ‘streambait’ article, describing a music that others have labelled ‘Spotifycore’.

“It’s a type of muted, mid-tempo, melancholy pop. Music that can fit easily onto a mood or affect-oriented playlist like Chill Hits or Chill Tracks,” she said, citing an unnamed pop producer’s claim that people often ask for a ‘sad girl Spotify song’ in the studio.

“This often means a whispery vocal, emo-ish lyrics and a low-key hip-hop inspired beat. Its seamlessness and its chillness reflect music that has become instrumentalised for the platform,” she said.

Pelly suggested that Billie Eilish is the current “poster child” for this sound, and balanced the celebration of her “viral streaming-era success” against an article published last year by David Turner in his Penny Fractions industry newsletter pointing to some industry connections that ran alongside her rise to fame.

“Streaming-era schemes may have worked well for the Eilishes, but they will never work for all artists, and therein lies one of the greatest incoherencies that Spotify feeds to artists,” said Pelly.

“The approach to a career that the music industry celebrates when it celebrates the successes of an artist like Billie Eilish, is an approach that has long defined the commercial pop machine’s vision of success. But it’s not just mainstream commercial pop artists who are expected to use these platforms today. Artists of all genres and levels are expected to use them.”

“Today, so-called independent artists are beholden to the tools of the pop machine in unprecedented ways. Meanwhile, the streaming industry continues to push narratives around so-called independence and autonomy that these platforms offer to musicians.” 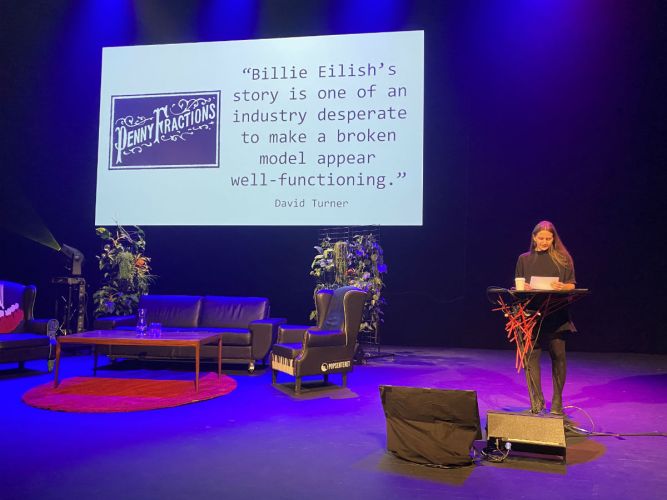 Pelly wasn’t pulling any punches by this point in her keynote.

Pelly would later describe Spotify’s annual Wrapped promotion in less-than-impressed terms: “Just an advertising campaign, and a cynical one at that. It also creates a dangerous feedback loop of inadequacy by perpetuating a scarcity mindset for music, as musicians compare themselves to one another, inevitably…”

She recounted the tale of one independent musician praised for their DIY success on Spotify’s blog, who was later spotted fretting on social media about late streaming royalty payments from his distributor.

“It speaks to what many of us already know is true: that Spotify’s image of independence is one that makes it harder for many artists, rather than easier, to advocate for themselves. And in promoting staunch individualism, the hyper-centralised corporate streaming economy leaves many artists in a state of powerlessness,” she said.

“This is not music culture. This is platform culture, or maybe this is Spotify culture. It’s a way of existing within music that is optimised for Spotify’s ideals of efficiency and success… though there are clearly some exceptional viral success stories in which it has worked out for a few individuals, in the grand scheme of things this is not sustainable, and it creates more value for the platform and its brand than for anyone else.”

Pelly’s keynote ended on an upbeat note, however. She cited a recent article by musician and writer Amy Klein that expressed the fear that “the very people who possess the most power to reshape reality for the better are the same people that our system marginalises and disempowers”, but suggested that in the musical context, those people – musicians – can come together.

Pelly described a current wave of “big music tech criticism that is vital and necessary… an inspiring level of critical discourse about the power dynamics of how music circulates on corporate platforms online today” and said that the task now is to imagine what can come next, while monitoring these platforms’ development.

“Right now, if you ask me, Spotify is more of a media conglomerate,” she said, citing its recent run of podcast acquisitions. “We must be wary of all the devastating effects that corporate media consolidation has had historically on music communities. When the media becomes more concentrated into the hands of a few powerful corporations, media integrity is at risk.”

Pelly wants the criticism to continue, with streaming viewed through the lens of both labour issues – in terms of the impact on musicians – and media justice issues, citing thoughts from the Future of Music Coalition on this front:

The politics of the music industry are complicated, but many music industry issues make more sense when you look at them through the lenses of labor justice and media justice. What's good for working musicians is also good for communities. We're in this together.

“We should look at the bigger picture of ownership of platforms, and always ask ‘who owns the platforms?’ and consider new models where artists and communities might have more power in decision-making,” she said.

Pelly also cited the ongoing No Music For ICE campaign, which is organising direct action by artists against Amazon over concerns about its work for the US Immigration and Customs Enforcement (ICE) agency, as an encouraging development.

“Right now there is a wave of projects and proposals aiming to redistribute power in the music industry back into the hands of artists and communities through collective means… There is plenty more to criticise, but when you remember the collective power that will always be possible when musicians and those who support them come together to value art over artifice, and community over commercialism, there is also a lot to be hopeful about. This might just be the beginning!”

The company has also pointed to its Spotify Safety Advisory Council, which it launched in June.