Audience Republic was established in 2016, three years after founder and CEO Jared Kristensen had lost $20k at a low-selling event he had put on. After three more years of organising various events, he realised that he was missing an effective solution that would help sell tickets.

The company now has offices in London, Los Angeles and Sydney, having worked with over 300 live events – primarily in the music space, but also with the likes of e-sports companies.

At the core of the company’s offering are two beliefs that directly translate into the features available on its platform. These beliefs are that: 1) word of mouth is the most powerful form of marketing; and that 2) owning your data helps drive more ticket sales. When looking into the platform’s backend, you will find two components that are designed to help you leverage these two beliefs.

The campaign element offers four different campaign types, allowing you to reward your top supporters and to capture data on them. The four campaign types are: Pre-sale; Ballot; Competition; and Waiting List.

When launching a pre-sale campaign with Audience Republic, artists and promoters are responsible for driving traffic to a landing page where fans can register for pre-sale access by connecting their Spotify account or providing their email address.

When connecting via Spotify, Audience Republic can capture a fan’s listening history over the past 90 days, which promoters can use to inform their future line-ups while artists can get a better understanding of their audience. But the most powerful part in this campaign is that fans are incentivised to share the pre-sale link or invite their friends to register, which they can get points for. For each share on Twitter or Facebook, they will get +5 points and for each friend that registers using their link, fans will get +10 points.

On top of that, fans can get extra points for liking, following or subscribing across the following platforms: Facebook, Messenger, Instagram, YouTube, Spotify (playlists, artists and tracks) and Snapchat, with +5 points for each action.

You can then reward your top supporters with things like cheaper tickets, free tickets or other prizes, with Audience Republic noting that typically the top score is around 200 points. This can achieve a viral effect for your ticket presale and you can, of course, further support this by promoting the registration link across your usual promotional channels and with paid ads.

Once the registration phase has ended, you can download a CSV file of all registrations from the campaign. After having ensured your ticketing is set up with your ticket provider, you can then allocate rewards and send out purchase links to registrants via your email platform or SMS. Audience Republic claims that this viral pre-sale tool can help in getting up to 450% more registrations and that the collected insights can be used to increase ticket sales and attract sponsorship money.

Similarly, artists can also set up competitions allowing fans to win prizes by sharing and following. For artists or events that have high-demand shows, ballot campaigns work in a similar way to how pre-sale campaigns do, with top scorers getting guaranteed access to tickets. For sold-out events, you can create a waiting list campaign, with fans being able to work their way up the line by earning points.

An added benefit is that this will also help you in determining the interest in an additional show based on the number of registrations for the waiting list campaign.

You can then bring the data you collect from all of these campaigns plus data from various platforms into the Audience Manager, which is the software platform component of Audience Republic.

Under the audience tab, you can find anyone who has engaged with one of your campaigns, is subscribed to your email database or has bought tickets. There’s a direct integration with Eventbrite and you’ll also be able to upload data from any other ticketing provider. Audience Republic then gives you multiple ways to slice and dice this data to understand demographic information or find your highest-value customers.

By looking into which fans attended the most events, you will find your most loyal customers. Jackie Rebrovic, Director of Demand Generation at Audience Republic, notes, “This is a really powerful thing – to recognise these most loyal customers and be able to continually reward them by giving early access or free tickets to shows and have that ongoing relationship with them.”

You will also be able to identify your top ambassadors and influencers who are able to sell tickets for you. By applying filters in a smart way, you can also look into who has spent, for example, $500 on tickets for the artist’s show in the last two years. With Audience Republic’s messaging integration, you will be able to directly message this fan with the opt-in being collected though the various campaigns on the platform.

When drafting emails, Audience Republic offers an email drag and drop builder which the company states is comparable to Mailchimp. Kristensen says, “One of our newest features is our email marketing and messaging platform. It’s designed specifically for event promoters and allows you to send messages across email, SMS and Facebook Messenger – all from a single platform. We’ve got some super-powerful targeting capabilities.”

Examples include: ticket buyers who purchased last year, but not this year; people who registered for pre-sale access but who didn’t purchase tickets; and your most loyal fans who have attended at least four events. The customer profiles will also give you insights into what kinds of tickets a fan buys and what the most popular times are for people to buy tickets, which you can then integrate into your social and advertising strategy.

Audience Republic also has an integration with Facebook Custom Audiences, meaning that you will be able to retarget those people who have previously bought tickets or engaged with any of your campaigns via Facebook’s Ad Platform. You can also exclude people who have already purchased a ticket.

This is something that Music Ally sees as one of the most powerful features here. If your ticket provider doesn’t allow you to install third-party cookies, like the Facebook pixel, on your ticketing site, Audience Republic allows you to understand who has bought tickets to make your advertising more efficient.

You can choose to add-on options such as the Campaign feature, starting from $1,000 (price on application), Email Marketing for $770 a year for up to 10k contacts and directly messaging your audience through Facebook Messenger for $999 a year per Facebook page.

When comparing Audience Republic to other solutions in the market, ToneDen comes to mind as a parallel service in terms of the viral contest features and its Facebook Messenger and email messaging features. However, it has to be noted that ToneDen is much less focused on ticketing and much more focused on automated marketing services.

Veeps is another company that shares some features with Audience Republic, such as being able to super-segment customers and directly message them – but without the various campaign options that Audience Republic offers.

All in all, for those who have a strong live presence, Audience Republic feels like a very powerful tool to sell tickets and ensure that you’re building an audience on the back of that with crucial insights into said audience.

The company started off in Australia and New Zealand (working with many festivals and promoters there). In terms of expansion, Kristensen says, “Our focus is to do the same across North America, the UK and Europe this year.” 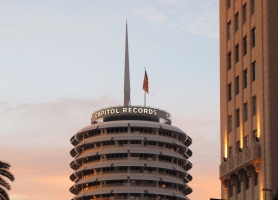 Capitol Music Group is bringing back its Capitol Royale tech event, although in a different form to last year’s two-day conference. The label has partnered with an online event called Infinity Festival Hollywood, which...
Read More

Anti-touting body the Face-Value European Alliance for Ticketing (Feat) has published a set of recommendations for improving secondary ticketing in Europe. They come on the back of the European Parliament's proposals for...
© Copyright Music Ally All rights reserved 2020 - Website designed and maintained by