Start today with the group of streaming services and tech companies announcing contributions to MusiCares’ COVID-19 Relief Fund in the US.

Amazon Music, Facebook, SiriusXM and Pandora, Spotify, Tidal and YouTube Music are the services, and while no amount has been given for their contributions, MusiCares said that in less than a week it has raised “millions more than the initial $2m” that started the fund to help artists and music industry workers.

(It’s US-specific, but we’re aware of streaming services actively seeking out similar funds and relief efforts across the world, so we expect more announcements.)

Talking of tech firms, the World Health Organization (WHO) is organising a #BuildforCOVID19 hackathon, supported by Facebook, Giphy, Microsoft, Pinterest, Slack, TikTok, Twitter and WeChat. It’ll get participants across the world to build projects around themes including health, community, education and vulnerable populations.

We’re not sure if it’s too late for big music firms to join the list of partner companies, but there’s certainly scope for them to encourage their developers to participate as individuals.

What else? Bandsintown has partnered with Twitch to offer ‘accelerated’ access to the latter’s affiliate program to Bandsintown’s community of artists. That means if they’re joining Twitch now, they’ll be able to start making money from subscriptions and ‘bits’ (explanation here) sooner than they would otherwise.

It’s similar to SoundCloud’s Twitch partnership announced earlier this week. Talking of Twitch: its parent company Amazon is signal-boosting musicians’ Twitch livestreams on its Amazon Music channel on the service.

More? Hashtags! Well, more than hashtags: campaigns getting up and running today include #loverecordstores – a global campaign hoping to drum up support for independent record stores affected by the current pandemic. Led by PIAS managing director Jason Rackham, it’ll see musicians and celebs filming and sharing video clips explaining what stores mean to them. It’s been announced this morning, and kicks off tomorrow.

Also coming out of the UK is #VirtualPint, a crowdfunding campaign to support independent music venues, pubs and arts spaces. People are encouraged to buy a virtual drink (or round) to support an initial target of £5k – but it looks set to shoot well beyond that. Perhaps a model that would work well elsewhere in the world too.

Meanwhile… UK industry body the BPI is maintaining a page of COVID-19 advice and resources; artist and YouTuber Peter Hollens has launched an ‘Epic Hand Washing Parody‘ with all revenues going to GlobalGiving’s Relief Fund; Shawn Mendes has donated $175k to a children’s hospital in his home city Toronto; and US label Fyrehouse is waiving its revenue share from streams of its artists’ music.

Finally, US journalist Cherie Hu has written a thoughtful article about ‘how the normalisation of remote work could transform the music business’ – it doesn’t shirk the potential downsides, but the upsides may give you some cheer about the good that may come from the current situation.

Photo by Hanny Naibaho on Unsplash

Twitch's standard revenue share for channel subscriptions is 50/50, but the Amazon-owned platform is having to have a somewhat delicate conversation with its creator community about it.
Read More

Until now, people who'd achieved 'partner' status on Twitch were subject to some exclusivity requirements in terms of livestreaming.
Read More 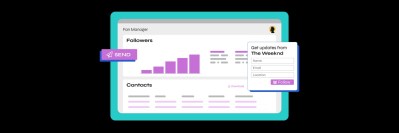 Bandsintown has long been a popular way for artists to gauge demand for their tours and connect with those fans.