There’s something of a domino effect happening as collecting societies sign off their plans for hardship funds and other measures designed to support songwriters and composers during the current pandemic.

French society Sacem has announced a €6m ‘rescue fund’ for hard-hit musicians, with grants of €1.5k, €3k and €5k available depending on the situation. Sacem has also made plans to pay out as much as €36m of ‘exceptional royalty advances’; and has put another €1m into its existing aid program for publishers.

Meanwhile, in the UK PPL is “working on implementing measures to pay out future royalties earlier than the next quarter payment” which would be due at the end of June. It’s also donating money towards several external hardship funds, and on the commercial side “is working to roll out measures that will ease the strain on its licensees”.

Elsewhere in the industry, analytics firm Chartmetric has announced that its premium tier will be made free to unsigned and self-releasing artists and their managers for the next eight weeks. “We hope that the market data in Chartmetric on engagement, demographics and geography across numerous DSPs and socials can provide valuable insight and help emerging artists to innovate and thrive,” said the company as it launched a form for artists and managers to apply for access.

What else is good today? A group of 20 Spanish independent labels have joined forces for the Music For Gloves initiative. Their goal is to raise money for medical gloves that will be used in hospitals to treat patients with Covid-19. The labels are each selling four tracks on Bandcamp as €2 digital albums.

Meanwhile, in the US there’s a #MusicMatters auction of items from artists including Miranda Lambert, Kacey Musgraves and Garth Brooks, with proceeds going to the MusiCares Covid-19 Relief Fund.

And finally, a campaign launching out of the UK today is Record Store of the Day (#recordstoreoftheday) which will spotlight a different independent store every day, encouraging music fans to buy from them online or over the phone if possible, to support them. Launched by a group of distributors, it has the backing of Record Store Day as well as industry bodies ERA, AIM, and the BPI. 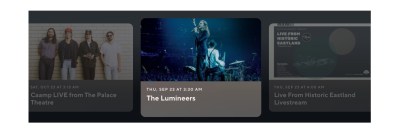