Travis Scott is coming to Fortnite this weekend with his ‘Astronomical’ event. Ahead of the multiple performances, the game has added several Scott-themed virtual products to its item shop. Fans wanting all of them will be spending nearly $35.

Here’s how that breaks down. There’s an Astronomical Bundle including two skins (characters) – Travis Scott and an Astro Jack alter-ego – as well as two ‘back bling’ decorations. Its official price is 3,500 of Fortnite’s V-Bucks currency, although that’s currently discounted to 2,500. 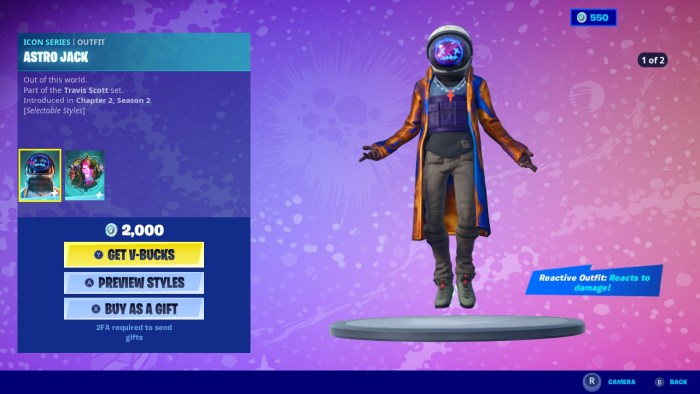 The various items can be bought individually too: 1,500 V-Bucks for the Travis Scott skin, 2,000 for the Astro Jack skin, and then 300 for the Head Banger emote, 500 for the Goosebumps wrap and 800 for the Diamond Jack tool.

Fortnite has also launched three Travis Scott-themed challenges, which players can complete in the game to earn individual rewards (and another emote, Rage, if they complete all three). 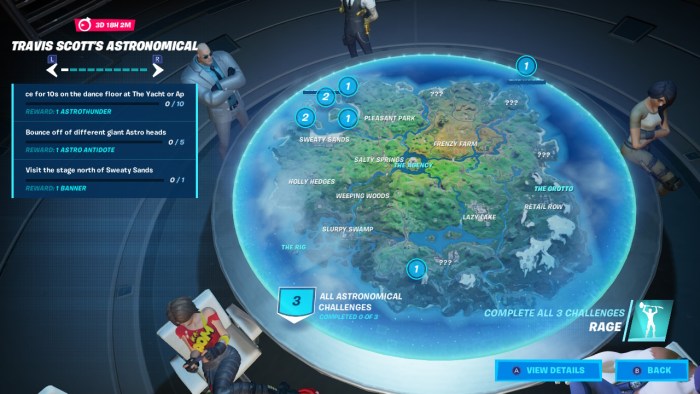 They involve visiting the event stage north of the Sweaty Sands location; bouncing off some of the giant ‘Astro’ heads placed within the game; and spending 10 seconds on the dance floor at the game’s The Yacht or Apres Ski locations.

Fortnite’s publisher Epic Games hasn’t talked publicly about the business terms surrounding these kinds of partnerships: we don’t know (yet) what kind of percentage Scott and his team are taking from sales of his item range. This weekend’s event is the biggest Fortnite music partnership since last year’s in-game performance by Marshmello, which attracted 10.7 million players.

The Astronomical event will include five separate performances on Friday and Saturday, spaced out so that players in all timezones will get a chance to attend.

Epic Games has also updated its advice to YouTubers and other creators on how the copyright issues around posting videos from the event will work.

“We’ve worked with our partners to ensure that content creators can share this one-of-a-kind experience with their communities. You should be able to stream, make videos, and share across all platforms from April 23rd – May 23rd, without copyright claims or demonetization on content from the Astronomical experience,” it explained.

“After that 30 day window has passed, your video will be demonetized, but no strikes or takedowns should be issued. To ensure you can share your video content as safely as possible, we suggest you include ‘TRAVIS SCOTT’ in the title of your videos. If you receive a Copyright Strike prior to May 23rd on Astronomical videos, please appeal the claim directly with the rights holders.”

It isn’t news that the games industry is now much bigger than the recorded music industry, and rather than that getting us down, it should fuel our excitement about the potential collaborations between the two industries....
Read More

Roblox delays IPO until next year due to pricing strategy

Games platform Roblox filed to go public in November, with a prospectus revealing its latest stats – including 17.6 million daily active users; $588.7m of revenues in the first nine months of 2020; and more than 18m games/experiences...
© Copyright Music Ally All rights reserved 2021 - Website designed and maintained by