Music industry body the IFPI was due to publish its annual Global Music Report in March, with data on worldwide recorded music revenues in 2019. The launch was postponed due to the Covid-19 pandemic, but the report has now been published today.

The overall total is the highest since 2004, when global revenues were $20.3bn. Streaming’s growth once again more than made up for the decline in physical music sales (down 5.3% in 2019) and download sales and other digital revenues (down 15.3%). 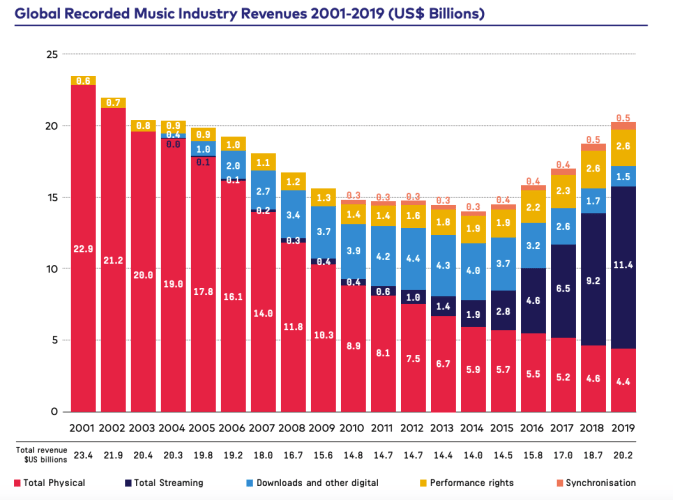 The IFPI says that global performance rights revenue fell by 3.6% in 2019, but said this was “largely attributable to one-off settlements in 2018” which spiked that year’s total. Meanwhile, sync revenues from advertising, film, games and TV grew by 5.8%.

Understandably, the IFPI isn’t crowing about the growth stats, given the current coronavirus situation. “Importantly, the strong foundation we built over the past several years helped deliver growth in 2019,” said chief executive Frances Moore.

“While the numbers we are reporting are a snapshot of the business last year, the COVID-19 pandemic presents challenges unimaginable just months ago. In the face of a global tragedy, the music community has united behind efforts to support those affected. This is a critical and ongoing priority as our member record companies work to continue to support the careers of artists, musicians and employees around the world.”

Here are some other talking points from the report:

(Now the caveat: one thing we know about last year’s Global Music Report, covering 2018’s figures, is that there was a big spike in revenues calculated for China – up by 79.6% from $295.8m in 2017 to $531.3m in 2018 – based on actually capturing data from Chinese digital services for the first time. Of the 9.7% global growth measured by the IFPI that year, China thus accounted for just over 1.3 percentage points. Today, the IFPI said that China’s market grew by 16% in 2020, so that played a part in the global deceleration.)

– Japan was the only one of the world’s top 10 recorded music markets not to grow in 2019. It fell by 0.9%, with a 4.8% decline in physical sales carrying a bigger weight in what’s still a largely physical market. Meanwhile, to answer a question from earlier this year about whether Germany had overtaken the UK as the world’s third biggest (behind the US and Japan) market… Nope. The IFPI’s list has the UK remaining in third place and Germany in fourth. The US market grew by 10.5%, the UK by 7.2% and Germany by 5.1%. China remains in seventh, and in fact the only change in the top 10 ordering is Australia and Canada switching places (eighth and ninth respectively in 2019).

– Breaking it down by regions: Asia grew by 3.4% in 2019 (dragged down by Japan – the region grew by 11.5% if it’s excluded); North America grew by 10.4%; Europe by 7.2% – encouraging, as it only grew by 0.2% in 2018; Latin America by 18.9%; and Australasia by 7.1%. We haven’t got the full report yet, with country-by-country figures, but it seems Africa and the Middle East are once again not included (although the report does include a case study of Warner Music Group’s partnership with Chocolate City in Nigeria).

– Deezer’s advert within the free version of the Global Music Report may be a talking point. “We’re French. Being revolutionary is our thing,” reads the ad, which promotes the streaming service’s desire to launch a trial of ‘user-centric’ royalty payments in its homeland. “Help us make streaming fair. Support our UCPS Pilot in 2020.” Industry gossip about why the pilot hasn’t launched yet – and specifically which major label(s) might be declining to take part – has been buzzing in recent weeks.

– Rather than a focus on piracy or the ‘value gap’ – although as a follow-on from the latter debate – the report this year sets out “four pillars of fair marketplaces for music” from the music industry’s perspective. They are: ‘music’s value should be recognised’; ‘copyright frameworks should be clear and provide for legal certainty’; ‘all parties should be free to agree the terms of their relationship’; and ‘adequate tools should be available to prevent music from being made available illegally’. The Covid-19 crisis has made a lot of people forget that the European Union’s member states are still implementing its recent copyright directive, but it’s clear that the four pillars will be the focus for the IFPI’s lobbying for how that implementation should be handled, as well as for the copyright modernisation it would like to see in other parts of the world.

– Remember that these reports measure recorded music, rather than the entire music industry. Former Spotify exec Will Page publishes an annual calculation of the ‘value of the music copyright business’ which includes publishing, but the unavoidable lag in collecting the data means that his figures for 2018 only came out in March this year (they showed the music copyright business was worth $30.1bn in 2018, up by 9.3% year-on-year). As for live music, consultancy firm PwC has predicted that live music will have generated $27.9bn in 2019, including just over $22bn from ticket sales and the rest from sponsorships.

– Now the IFPI report is out, we can compare its official figures with the unofficial ones published by research firm Midia Research in early March. It claimed that recorded music revenues grew by 11.4% to $21.5bn in 2019, with streaming up by 24% to $11.9bn. That means Midia is estimating $1.3bn more global revenues in 2019 than the IFPI is reporting, with Midia’s total including $873m of ‘artists direct’ revenue – for artists without labels. It’s fair to say that the IFPI and Midia hold differing opinions on how well those revenues are tracked in the official figures…

GESAC is joining the fray with its ‘Study on the place and role of authors and composers in the European music streaming market’ study.
Read More