We’re all very well aware now of the ease with which artists can sit in their homes, performing for and chatting to fans via Instagram, YouTube, Facebook, Twitch or various other livestreaming platforms. They can raise money for charity, sell merchandise, solicit fan donations or just do it for fun.

The lessons learned from all this will serve them long beyond the Covid-19 pandemic, but as lockdown restrictions ease, there’s something else to explore: out-of-home performances but still with online audiences in mind. A couple of announcements yesterday and today have been making us think about this.

Laura Marling, for example, is playing a live solo concert from London’s Union Chapel on Saturday 6 June from 8pm UK-time. It’ll be streamed live for fans in the UK and Europe (there’s a separate event for North America) and they’ll pay £12 for a ticket using the Dice app, with optional charity donations on top. What’s more, those tickets will be limited in number, just as they would be for a physical audience. That flies against the assumption that a big benefit of online concerts is smashing through real-world capacity limits, but it promises to be a useful test of whether scarcity creates value for online concerts.

Elsewhere, innovation may focus around the staging and the delivery of performances. Music VR startup MelodyVR has built a studio in Los Angeles, and is launching a weekly ‘Live from LA’ series starting with John Legend this Saturday (16 May). The pitch to fans is that they’ll be able to “virtually stand next to their heroes and experience the power of live performance” via VR headsets or MelodyVR’s smartphone app – but the actual performance will, of course, be filmed with detailed social distancing and sanitation precautions. The first performances will be free, but MelodyVR hopes to make money from them later in the series.

There is more to come from technology companies working with artists to explore new ways of filming performances and making them interactive for fans. Microsoft announced a project called ‘RE:Surface‘ yesterday, which is trying to help artists “uncancel” their gigs, while making inventive use of a range of technologies. Jade Bird is the first artist to take part, with a concert on 29 May that promises to give fans “the ability to interact with the performance, visuals, the music and the artist in real-time”. Microsoft also says it will be creating a ‘blueprint’ of the tools and assets used, for other artists to learn from.

One of the lessons from the Covid-19 livestreaming boom is that you don’t *need* high-tech wizardry, expensive sets and ultra-polished production to connect with fans. In fact, often the more raw, loose and playful the experience is, the better. Still, alongside this there is lots of creative potential in digital experimentation around hybrid live/online performances, and as you can see, no shortage of technology companies keen to work with artists to explore this.

AmazeVR made waves with a Megan Thee Stallion concert filmed for viewing with virtual reality headsets in cinemas across the US.
Read More 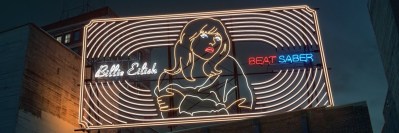