Here’s a question to chew on this morning: is TikTok’s parent company ByteDance worth more than Spotify, Tencent Music, Vivendi and SiriusXM put together? According to a report by Bloomberg, it might be.

This is based on data from private share transactions. “Some trades recently valued the Chinese company between $105 billion and $110 billion on the secondary markets,” claimed the report. “It has also traded as high as $140 billion.”

There’s also a spicy quote from Andrea Walne, partner at VC firm Manhattan Venture Partners: “The trading of ByteDance is reflective of the global wave of consumers who agree that ByteDance can displace Facebook as the leading social network.”

That’s quite the claim, but it is a reminder that ByteDance is far from a one-product company. TikTok may be the app we know it best for (plus its recently-launched music streaming app Resso) but its first big hit was Toutiao, originally a news app which has since expanded into other kinds of content – user-generated included. There’s also Douyin, essentially TikTok’s Chinese version, as well as anticipated moves into new markets from games to office software.

Speculation about ByteDance’s value is far from idle: before the Covid-19 pandemic hit, the company had been tipped to go public in the first quarter of 2020, while also planning an aggressive expansion of its headcount to 100,000 people by the end of this year.

Information on its finances is sketchier: media reports suggested that ByteDance generated revenues of $7.2bn in 2018, then between $7bn and $8.2bn in the first half of 2019 alone. The company was reportedly valued at $75bn in October 2018 when it raised a $3bn funding round.

These figures will be front of mind for music rightsholders when they negotiate future licensing deals with TikTok and Resso, of course. ByteDance’s music and media ambitions are clear from its recruitment of senior Disney executive Kevin Mayer as COO of the parent company and CEO of TikTok. 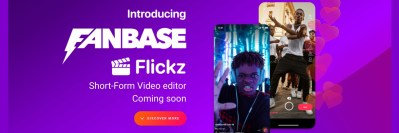 Fanbase builds its own TikTok with ‘Flickz’ video and music editor

Described as a "short-form video and music editor... allowing Fanbase users to record short video clips and augment in real-time their personal collections with filters, music and more"
© Copyright Music Ally All rights reserved 2021 - Website designed and maintained by