Warner Music Group’s initial public offering launches today, with the music group offering 70m shares in a public offering whose price is expected to be between $23 and $26 per share.

“The offering consists entirely of secondary shares to be sold by Access Industries, LLC and certain related selling stockholders,” explained WMG in its announcement. “The underwriters will have a 30-day option to purchase up to an additional 10,500,000 shares of Class A common stock from the selling stockholders. The Company will not receive any proceeds from the offering.”

The group will be listed on the Nasdaq stock market with the ticker symbol WMG. Its S1 regulatory filing has been published today – you can find it here – with the prospectus for investors considering investing in a company whose recorded music business generated $3.84bn of revenues in its last fiscal year, with its publishing arm adding another $643m.

The prospectus doubles as a defence of major labels’ role in the modern music industry, claiming that “Today, global music entertainment companies such as ours are more important and relevant than ever.” It continues:

“The traditional barriers to widespread distribution of music have been erased. The tools to make and distribute music are at every musician’s fingertips, and today’s technology makes it possible for music to travel around the world in an instant. This has resulted in music being ubiquitous and accessible at all times. Against this industry backdrop, the volume of music being released on digital platforms is making it harder for recording artists and songwriters to get noticed. We cut through the noise by identifying, signing, developing and marketing extraordinary talent.”

It’s a long document, and we’ve only had time to skim-read it so far, but there are some fun nuggets, including:

– Financial data that we’ve reported on as WMG has published it in previous quarters, but for ease of having it in one place: 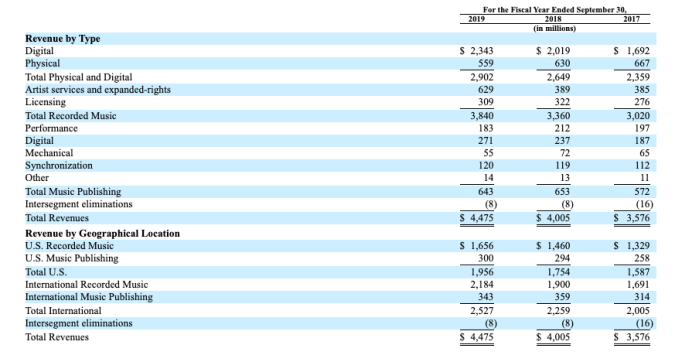 – WMG’s views on streaming subscription pricing. “In addition to paid subscriber growth, we believe that, over time, streaming revenues will increase due to pricing increases as the broader market further develops,” it suggests, citing Spotify’s Norwegian experiment as well as Amazon Music HD. “We believe the value proposition that streaming provides to consumers supports premium product initiatives.”

– Backing for TikTok and other short-form video platforms. “Such applications have the potential for mass adoption, illustrating the opportunity for additional platforms of scale to be created to the benefit of the music entertainment industry. These platforms enable incremental consumption of music appealing to varied, and often younger, audiences.”

– A reminder that WMG holds minority equity stakes in both Deezer and Tencent Music. Remember, WMG’s parent company Access Industries owns a controlling equity interest in Deezer too. After the IPO, Access will still control more than 99% of the total combined voting power of WMG’s outstanding common stock. A little later in the filing, there’s also this: “Access is in the business of making investments in companies and is actively seeking to acquire interests in businesses that operate in our industry and other industries and may compete, directly or indirectly, with us.” Note the ‘actively’.

– A hint at plans for more publishing acquisitions. “we have the opportunity to generate significant value by acquiring other music publishers and extracting cost savings (as acquired catalogs can be administered with little incremental cost), as well as by increasing revenues through more aggressive monetization efforts. We will also continue to evaluate opportunities to add to our catalog or acquire or make investments in companies engaged in businesses that we believe will help to advance our strategies.” Later in the filing, WMG reveals that in the six months ended 31 March 2020, it spent $16m on acquiring publishing rights.

– Some Covid-19 lockdown stats: WMG’s recorded music streaming revenues for April 2020 were $183m, up 12% year-on-year. Its publishing revenues were up by 16% to $22m in the same month. Overall, WMG’s total digital revenues were up by 10% year-on-year in April BUT its estimated total revenue – digital and non-digital together – was down by 10% as the digital growth was “more than offset by decreases in revenue from artist services and expanded-rights, ad-supported digital and physical revenue in Recorded Music and synchronization revenue in Music Publishing”. WMG expects these revenue sources to “largely recover” as the pandemic subsides. Largely?

– Its top two digital partners, Apple and Spotify, together accounted for 27% of Warner Music Group’s total revenues in its fiscal 2019 – 14% for Spotify and 13% for Apple. That was a changing of the guard, because in 2018 Apple had accounted for 15% of WMG’s revenues, and Spotify for 14%.

– Warner Music Group is “highly leveraged. As of March 31, 2020, our total consolidated indebtedness, net of deferred financing costs, was $2.983 billion.”

– In WMG’s 2017 fiscal year, it generated $73m from sales of certain catalogues from its 2013 acquisition of Parlophone Label Group to independent music companies – the famous ‘divestiture’ process.

– Some useful stats on the mechanics of a major label’s recordings business. WMG’s recorded music revenues for the six months ended 31 March 2020 were $1.99bn. The filing breaks down the cost of revenues between ‘artist and repertoire costs’ ($558m, 28% of the total revenues) and ‘product costs’ ($429m, 21.5% of the total revenues). Meanwhile, WMG’s recordings business spent $718m on sales, marketing, distribution and general/admin expense during that period – 36% of total revenues.

– There are also stats for publishing: $339m of revenues in the six months ended 31 March 2020, with $216m of artist and repertoire costs (64% of total revenues). Sales, marketing and general/admin expenses of $44m accounted for 13% of total revenues.

– In WMG’s fiscal 2018, it generated $504m from selling its shares in Spotify, after the latter company went public. 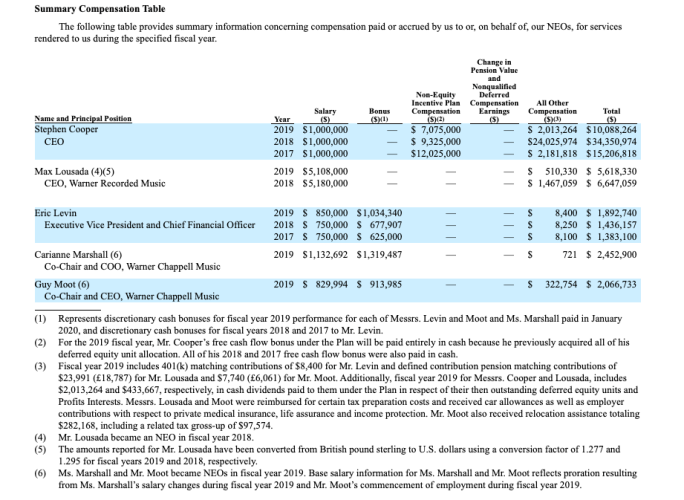 – Back to Deezer. In WMG’s fiscal 2017, 2018 and 2019 years respectively, Deezer paid it $36m, $39m and $49m as part of its sound recordings licensing deals with the company. It paid an additional $1m to Warner Chappell in fiscal 2019 for direct publishing licences – although this is on top of royalties for the publisher’s music collected through statutory licences and collecting societies.

– One last Access Industries note… Boss Len Blavatnik’s son Val Blavatnik has a publishing deal as a songwriter with Warner-Tamerlane Publishing Corp “pursuant to which, in fiscal 2019, he was paid $162,500 in advances recoupable from royalties otherwise payable to him from the licensing of musical compositions written or co-written by him”. It turns out that Val’s co-writing credits include Post Malone feat. Young Thug’s ‘Goodbyes’, as well as other tracks by Lil Peep, Fall Out Boy and Vampire Weekend.