Earlier today, the European Commission launched two formal antitrust investigations of Apple, including one spurred in part by Spotify’s complaint to the EC last year.

This afternoon, Spotify held a Zoom call for journalists where its head of global affairs and chief legal officer Horacio Gutierrez discussed the investigation, with added comments from external counsel Thomas Vinje, of Clifford Chance, who is Spotify’s lead counsel on the case.

Gutierrez spoke on the record, while Vinje spoke on background. You can read up on the specifics of Spotify’s complaint here, and Apple’s rebuttal last year here. But here are some of the key points made by Gutierrez during this afternoon’s call.

– He was keen to flag this investigation’s wider potential: “The first step towards developing new rules: rules of the road that will govern the conduct of online platforms for years to come.”

– Some zingers aimed at Apple: it “acts as stadium owner, referee and player, and tilts the playing field in favour of its own services”; it has exerted “selective, capricious enforcement” of its App Store restrictions on services like Spotify which rival its own; and its “track record of being inconsistent and unfair continues to this day”. There’s plenty more in this vein.

– Spotify claims that Apple’s cut of in-app purchases – 30% initially, dropping to 15% for in-app subscriptions after a subscriber has been paying for a year – are “only imposed on digital content apps: apps that competed with Apple’s own apps, or are active in areas that Apple is likely to enter in the future… Uber or Deliveroo are not subject to the Apple tax,” said Gutierrez.

There are some arguments in store here. On the face of it, this doesn’t seem like a policy focused on rivals to Apple’s own services. It’s more that if an app is selling digital goods (be they subscriptions or a la carte content) Apple takes a cut, and if it’s other non-digital things – ridesharing, food deliveries etc – it doesn’t.

Every freemium mobile game ever has been subject to the same rev-share as Spotify, without seeming like a ‘rival’ – although Spotify might argue now that the Apple Arcade subscription gaming service is a rival to those other games on the App Store. Gutierrez also specifically referenced Apple’s deal with Amazon earlier this year for the latter’s Prime Video app, which appears to avoid the rev-share. “Through some undisclosed business quid pro quo, Amazon was exempt,” he claimed. 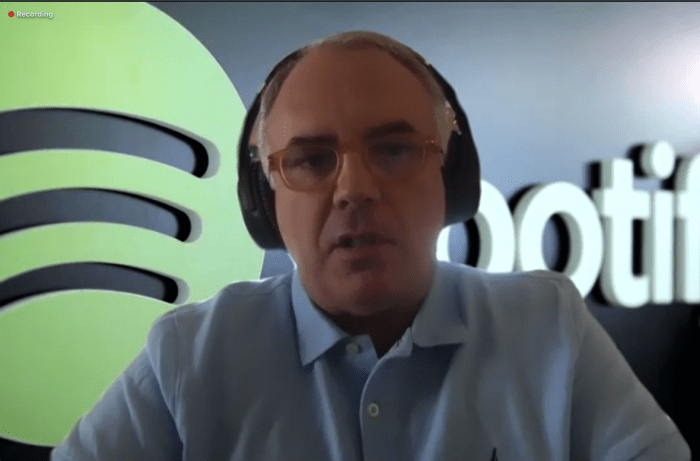 – If the Commission finds against Apple, Spotify wants it to do two things. First: to remove the obligation for apps to exclusively use Apple’s in-app purchases system to sell subscriptions and digital content. And second, to remove the marketing restrictions that bar apps from promoting their own payment methods for subscriptions outside Apple’s system. Spotify argues that its discounts and offers are nixed by this too.

– When might the European Commission investigation result in a decision? “We hope the Commission will act with urgency, because the industry moves at internet speed,” said Gutierrez. However, ‘urgency’ in antitrust terms is still a fair old while: even a year and a half might be an optimistic timescale for a decision to be reached. Spotify is not asking the European Commission to take interim measures against Apple however – something that would likely delay the process of reaching a final verdict.

– Spotify is seemingly hoping to get the music industry on its side in this dispute. When asked what the impact would be of a ruling against Apple in the investigation, Gutierrez said this: “It would accelerate our ability to grow premium users, which would in turn result in better monetisation of the Spotify app, which in turn would also result in better monetisation for music rightsholders which receive the lion’s share of the money that we generate.”

(Watch for Apple to take the gloves off in response to this suggestion, as it did last year in its rebuttal. Spotify’s argument that Apple is a barrier to it paying even more money to rightsholders is made a bit more awkward by the fact that in the US, Spotify is one of a group of streaming services appealing against new (higher) songwriter royalty rates set by the Copyright Royalty Board, while Apple is not.)

He later returned to the topic, confirming that “we have been approached by a variety of agencies in the US both at the federal level and the state AG [attorney general] level. Most have been approaches by them soliciting information on our situation with Apple and the state of the European case,” he said. “We have provided as much information as possible in those contexts, but we have not so far specifically filed a complaint or proactively sought for them to start a case.”

Although Gutierrez suggested this was more about different antitrust systems in Europe and the US, he also made a telling comment that indicates Spotify may feel it has a better chance of winning a ruling against Apple in Europe. “At the moment we’re really focusing on this case in Europe. We believe that is where the thinking and the ability to address these technology issues is more likely to result in a positive outcome.”

He added that regulators across the world are showing an interest in the European complaint (and now investigation) though. I can’t predict how things are going to evolve in the US or any other particular country, but what I’m hoping is the decision by the European commission to take on this case will mean that what will come out of this will be a decision that will lay the foundation for the principles that will guide the way online platforms will behave.”

Beyoncé's 'Renaissance' album is a big cultural moment, but how big AND long-lasting a streaming moment will it be?