In May we reported on Marshmello teaming up with creative-software firm Adobe on a ‘Be Kind’ campaign, getting fans to create a short video based on his new single. Now the company is launching a new contest with Lady Gaga based around her latest album ‘Chromatica’.

Gaga is providing her own assets for the competition: photos, illustrations, logos, icons and typography, with fans challenged to “create your Chromatica” using Adobe tools like Photoshop and Illustrator. A grand prize of $10k plus a print of their creation autographed by Gaga herself is up for grabs.

There are echoes (possibly unwanted, given its mixed reception) of Lady Gaga’s ‘ARTPOP’ app back in 2013, which included its own section for creating Gaga-inspired digital art.

Music marketing platform Linkfire has announced its latest data deal, with YouTube Music. "In addition to seeing how many of your link visitors click through to YouTube and YouTube Music, you’ll be able to see how those...
Read More

Lead: Experiential brand activations in a non-live world – Creating effective brand activations has never been easy – but there was one basic starting point: find an event with lots of people, and connect with them....
Read More 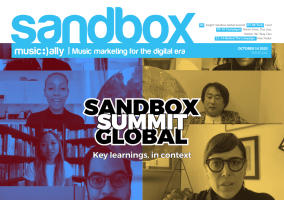 Lead: Sandbox Summit Global – Over five days at the end of September, we held our Sandbox Summit Global conference. For this Sandbox report, we’re digging into what we learned from the event and how it relates...
© Copyright Music Ally All rights reserved 2020 - Website designed and maintained by