In June 2019, Wixen Music Publishing sued streaming service Pandora, alleging ‘unauthorized commercial exploitation’ of lyrics from songs in its catalogue. The case focused on Pandora’s feature showing lyrics from partners including LyricFind, which was mentioned in the lawsuit.

How’s the case going? Well, there’s been a development this week. The latest filing reveals that Pandora moved to dismiss the case in January, but before that could be ruled on, Pandora and Wixen entered settlement talks.

Now the court’s patience appears to have run out with those.

“Having been engaged in settlement talks for nearly six months, the Court finds further delay will not ‘secure the just, speedy, and inexpensive determination of every action and proceeding.’ Fed. R. Civ. P. 1. The Court therefore GRANTS Defendants’ previously submitted motion to dismiss,” explained the latest document, which was published on 7 July. 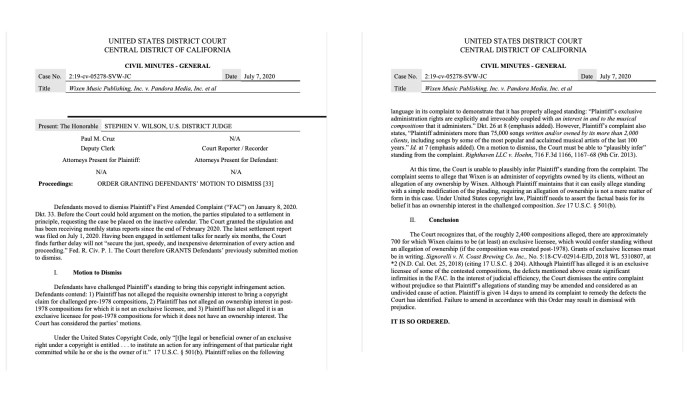 The ruling goes on to explain one of the issues with Wixen’s case: “The complaint seems to allege that Wixen is an administer of copyrights owned by its clients, without an allegation of any ownership by Wixen”.

The implication seems to be that a publishing rights administrator is on shaky grounds suing a streaming service for works that it doesn’t itself own (but administers for clients).

However, the ruling also notes that Wixen does claim to own around 700 of the 2,400 compositions in this particular case, so the complaint has been dismissed “without prejudice” and Wixen has been given 14 days to “amend its complaint to remedy the defects the Court has identified”.

As we reported yesterday, it’s still up in the air whether Donald Trump or the Chinese authorities will accept Oracle and Walmart’s proposed deal for TikTok in the US. If not, as things stand TikTok will be banned...
Read More

The music industry may still be picking its way through Kanye West’s self-leaked Universal Music Group deals, but West is making it clear that his campaign around artist contracts is more than just a moment on Twitter....
© Copyright Music Ally All rights reserved 2020 - Website designed and maintained by