Taylor Swift Folklore made $1.2m in three days… from one Chinese DSP

Taylor Swift’s new album ‘Folklore’ may have been a surprise release, but its popularity is entirely unsurprising. According to Republic Records, the album sold more than 1.3m copies in its first 24 hours, and was streamed 80.6m times on Spotify and 35.5m times on Apple Music.

Critical acclaim has been flooding in for the album, while the D2C strategy is already into its next phase: a phone stand, hair ties and bandana are the latest items up for grabs on her store.

Global sales are good, but we think there’s an even more interesting story in how ‘Folklore’ is being sold in China, on streaming service NetEase Cloud Music.

The album *isn’t* available on that platform’s free OR paid tiers, but instead has to be paid for: RMB 25 ($3.55) for the album or RMB 2 ($0.28) per track, which lets people download and stream the music. Swift provided a personalised ‘thank you’ message for fans who bought the album on NetEase Cloud Music too.

How has that gone? Music Ally tracked the public figures on the platform to find out. Barely half an hour after its release in China, ‘Folklore’ had sold more than 100k copies on NetEase Cloud Music alone. It passed the 200k mark in under six hours, and now at the time of writing (Monday morning) it has sold more than 330k copies as a digital album on the service. That’s nearly $1.2m of sales revenue from a single DSP in three days. 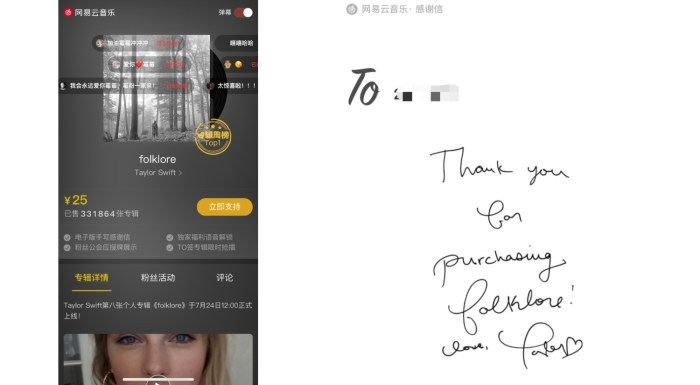 With ‘Folklore’ also available through Tencent Music’s streaming services in China, it seems likely that the country will be accounting for a significant chunk of the album’s global sales – and while we don’t have a ‘first 24 hours’ figure for NetEase Cloud Music to compare with Republic Records’ global total, it’s clear that at the very minimum, NetEase accounted for 15% of the 1.3m units worldwide.

It’s no surprise to see China playing a big role in the early sales success for a new Taylor Swift album. In August 2019, Universal Music proudly announced that her ‘Lover’ album had done more than 1m “first-week full-length album consumption” units in China.

While the surprise drop and the heavyweight D2C strategy may be the headline makers for ‘Folklore’ in the west, what’s happening in China with the album is also an important part of the story.

The question of how much Universal Music Group is worth has been a hot topic in recent years. Escalating estimates from Goldman Sachs, for example, which valued UMG at $23.3bn in 2017, rising to $53bn in April 2021. Or,...
© Copyright Music Ally All rights reserved 2021 - Website designed and maintained by