China has become an important market for Japanese artists and labels in recent years. Now streaming service NetEase Cloud Music is staking its claim to be the “platform of choice for fans of Japanese music” in China.

It’s wielding a report published by research firm Small Antlers Think Tank as its proof: a survey of around 100,000 people in China. The report praises NetEase’s catalogue of Japanese music, from J-Pop and classical to game and anime music, as well as its features for commenting on music.

“The report concluded that 61% of NetEase Cloud Music’s users read comments and around 25% of users write comments,” claimed NetEase’s press release – these are useful stats to understand its service, beyond the Japanese angle, by the way.

There’s also a reference to Japanese band Radwimps selling more than 200,000 copies of their ‘Weathering with You’ album on NetEase Cloud Music, using the same ‘digital album’ a la carte feature that worked so well for Taylor Swift’s ‘Folklore’ recently.

As we reported yesterday, it’s still up in the air whether Donald Trump or the Chinese authorities will accept Oracle and Walmart’s proposed deal for TikTok in the US. If not, as things stand TikTok will be banned...
Read More

China blast for TikTok deal as ‘dirty and underhanded trick’

President Trump may have tentatively approved TikTok's deal to avoid a ban in the US, but what will the Chinese government make of it? Judging by state-media outlet China Daily's blistering editorial column this morning – title:...
Read More 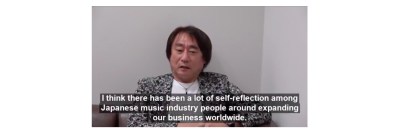 The Covid-19 pandemic may be encouraging the Japanese music industry to look outwards more, according to Tatsuya Nomura, president of the Federation of Music Producers Japan (FMPJ). Speaking at Music Ally's Sandbox Summit...
© Copyright Music Ally All rights reserved 2020 - Website designed and maintained by