The round was led by Forerunner Ventures, with Sequoia Capital partner Jess Lee also among the angel investors, as the startup also announced the first set of artists who’ll be using its platform.

Kygo is one of them alongside Yungblud – who’s using Moment House for his ‘digital world tour’ – Blackbear, Kaytranada, Denzel Curry and Ruel.

Ahead of the announcement, Music Ally talked to CEO and co-founder Arjun Mehta about his plans for livestreaming experiences that fans will be happy to pay for.

A graduate of the USC Jimmy Iovine & Dr. Dre Academy, Mehta counts on the strong support of his “mentor” Iovine, alongside the angel investors who are being announced today.

In one sense, Moment House is not wildly different to the other livestreaming platforms jostling for attention during the Covid-19 pandemic: Maestro, Veeps, StageIt, Release Party, Bulldog DM and the rest.

In this case, artists announce shows (or “moments”) and sell tickets to those shows, along with up-sells to merchandise and VIP experiences. Mehta is hoping that the quality of the fan experience will help Moment House to stand out from the crowd.

“It felt like a fundamental utility was missing from the internet, where artists can charge for a special moment that fans can share with them,” he said.

“What distinguishes us is that we’re focused on the fans’ feelings – it should always be the north star. Our focus is on user experience – and people recognise that there is something special here.”

“We asked: how do you marry technology with culture and embed tech in culture and not become just another app?” he continued. “We’re always working backwards from the fans – if we can make them feel like they’re in a private, ephemeral, exclusive section of the internet with my artist in this beautiful moment, then we’ve succeeded.” 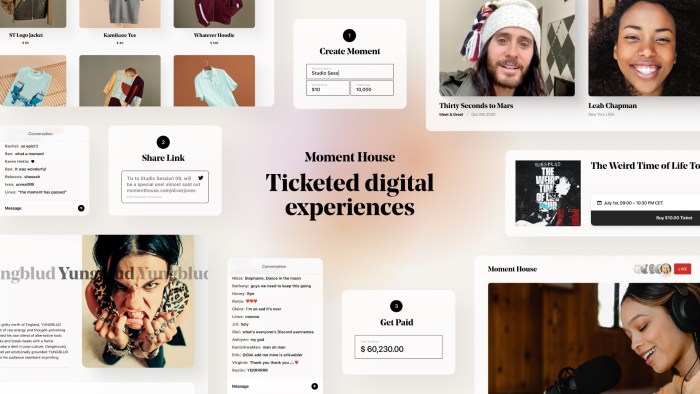 Mehta grew up in Silicon Valley, and experienced the success possible in the startup world at an early age. In his middle-school years – that’s 11-14 to non-Americans – he and his father co-founded a startup called PlaySpan, with a marketplace for buying and selling in-game virtual items.

PlaySpan was acquired by Visa for $200m in 2011. Since then, Mehta combined his USC studies with roles co-founding music discovery startup Trakfire (whose investors included Iovine and Carter) before a stint as head of growth at AR-headset maker Mira Labs. And now Moment House.

“Jimmy has been a close mentor – I have a strong relationship with him and he really cares about the company’s success,” said Mehta. “Troy Carter was also really helpful… he and Jimmy were my crash course in the music industry. Troy gave me office space to work in. He was a special part of my journey.”

Moment House was founded in November 2019, before the Covid-19 pandemic laid waste to the physical concerts industry in so many countries. However, Mehta says that he’d already seen an opportunity for ticketed livestreams.

“Nothing has changed except acceleration. This shift was always going to happen. It was never meant to replace touring, and it’s not a substitute for it now. At the start, in 2019, we asked how we can craft a compelling fan experience. It’s really about creating a new digital media ‘unit’ of a moment,” he said.

“It’s not a knee-jerk reaction. When Covid arrived in the US, we realised that we now had to move fast. There’s so much potential in a first-principles approach – how do we create the perfect premium experience between an artist and fans?”

The word ‘premium’ is key here. Moment House, like its rival startups, is trying to find clear water between the experiences it provides, and those that fans can get for free on the bigger social and video services.

“A lot of things can co-exist in this space. Platforms can exist for different artists and different needs – Kenny Beats is an example of an artist who uses Twitch really well,” he said.

“Twitch and instagram Live are great for freely engaging with the world – but there needs to be a place to engage with the core fanbase. Moment house is where you give your core fans – the ones that matter – something special, a unique experience.”

Core fans, he explains, are the fans that buy tickets: with ticketing being the function that filters out casual fans, and brings the core fans together.

“If you’re in a venue watching an artist, it’s so special when you feel that you have something in common with those people in the room,” as he put it.

For now, Moment House is targeting artists “with some level of following” who are looking to charge for their online performances, while also engaging with fans. Further out, he sees a wide potential base.

“You can have a huge tier one artist and make lots of money. But you can also imagine someone with 100 fans around the world, and the streaming services aren’t paying them much, but if they charge $10 per ticket, that’s $1,000 in revenue,” he said. “We hope to help a middle class of artist to emerge. That would be incredible.”

While artists’ social followings elsewhere will be one of the main ways they promote shows on Moment House, the company is also planning to help market the events. It’s also very deliberately not using the ‘livestream’ terminology.

“Part of it is sparking the imagination and creativity of artists. That’s part of why we called it a ‘moment’ – ‘livestream’ sounds limited. On the fan side, ‘livestream’ has a lot of baggage. It feels very passive. So we thought, let’s not limit it. By calling it a ‘moment’ they all approach it with a fresh mind,” said Mehta.

“Artists should approach it differently, in the same way that you don’t make a TikTok video in the same way you make a YouTube video. They shouldn’t do the same thing that they do elsewhere, but now behind a gate. It should be purely additive, new and different.”

“We’re seeing album release parties; private and intimate acoustic sets; experiences with a very cinematic focus; or interactive experiences, where artists talk between songs, and fans feel they are participating. We work with great artists and we’re selective. We’re definitely curating them.”

Moment House will give artists 100% of their ticket sales, and make its cut from a 10% service fee. However, the company is already eyeing further possible revenue streams.

“We have merchandise integrations, and opportunities for afterparty experiences – upselling fans to even more private experiences,” said Mehta. “Our focus is maximising transaction volume, and we’re in the best position to do so: our focus is on the best music experience.”

He’s already adept at offering soundbites designed to appeal to investors and artists alike. “Anyone can slap a paywall on a livestream, but that’s not what’s going to win. The best user experience will win.”

There are plenty of livestreaming startups popping up in 2020, but a company called Clubbing TV has been doing it for a decade, with more than 1,500 hours of electronic-music streams under its belt already. Now it’s...
Read More

Sony Music is leaning in to the music/tech startups industry in Brazil with a new ‘Digital Accelerator Programme’. It’s looking for inventive music projects using AI and machine learning that could be used...
Read More

Tribe XR is an interesting music/tech startup: we wrote about it when it pitched as part of the Techstars Music demo day in May. It’s a virtual reality DJ training app: people put on their VR headset and learn to...
© Copyright Music Ally All rights reserved 2020 - Website designed and maintained by