Podcasters regularly complain about the difficulty and/or cost of licensing commercial music for their shows. With hundreds of millions of people now listening to podcasts globally, there’s a big opportunity for the music industry, if good licensing models can be worked out to put music in podcasts, while ensuring that rightsholders and musicians get paid.

Hang on though. Spotify has a huge catalogue of licensed music, is one of the biggest podcast distribution platforms, and has its own tool (Anchor) for creating podcasts. Couldn’t it do something about the problem? And today, it has.

The streaming service is announcing a new format – an “evolution” of its mixed-media playlists like Your Daily Drive – which will enable podcasters to put music in their shows, and for streams of those shows to generate royalties for the rightsholders.

These podcasts will need to be created using Anchor, which is being updated to support them today in the US, UK, Canada, Australia, New Zealand and Ireland. That means anyone will be able to create the shows, not just Spotify’s own podcast studios and partner production companies.

“With shows that use this new format, listeners can interact with the music within the episodes, in the same way they interact with all other song tracks on Spotify (for example liking, saving, and reading more information about a track) without having to leave the episode page or search for it manually,” explained Spotify in a blog post this afternoon.

“Shows using this format are exclusive to Spotify because they rely on Spotify’s music catalog licenses and compensate musicians and songwriters just like any regular stream of a music track on Spotify. Spotify Premium listeners will hear full tracks as part of these shows, and those with the Free tier will hear 30-second music previews.”

(So yes, unlike regular podcasts created within Anchor, this new kind of show won’t be able to be distributed to other podcast platforms. At least for now: we wonder if the 30-second-preview feature could be adapted for that purpose in the future, if Spotify wanted to.)

Today, Spotify is launching seven of its own Spotify Original podcasts that use the new format, as a showcase for what it’s capable of: a mixture of documentary series and interview shows that will be gathered into a new ‘Shows With Music’ hub on the streaming service. 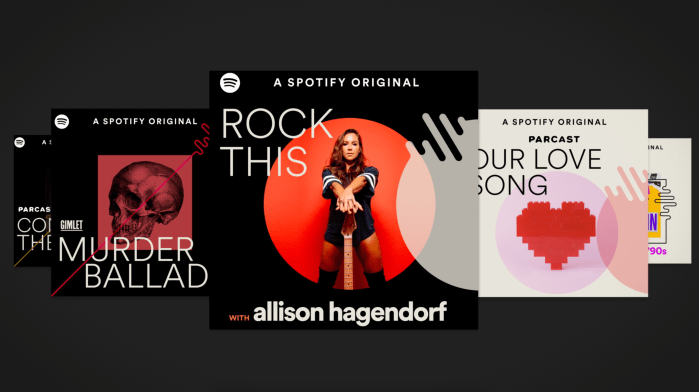 This isn’t the first example of a hybrid podcast/music format. In February 2019, Pandora launched its ‘stories’ feature, inviting artists, influencers and celebrities to create playlists blending their song picks with spoken-word intros and explanations. Classical streaming service Primephonic has recently been producing its own podcasts mixing interviews with musicians, composers and conductors with the music itself, too.

Further back, in 2014, Spotify worked with artist Billy Bragg on a series of ‘talking playlists’ with Bragg’s introductions to some of his favourite tracks interspersed with the songs themselves.

More recently, Spotify algo-personalised playlists like ‘Your Daily Drive’ and ‘Daily Wellness’ have mixed podcast clips with music, although these are clearly still playlists, so different from what’s being announced today.

That announcement is a fairly big deal, we think, for several reasons. It’s going to spark a new wave of music-focused podcasts, for starters, but it also addresses the sensitivities of some rightsholders, who’ve been concerned about the prospect of podcasts cannibalising music listening on Spotify.

Music shows using the new format could be great discovery vehicles for frontline and catalogue music alike – note the features to like and save tracks – but crucially will also be generating royalties for that music.

Another reason today’s news is significant: it could create a proper network of on-platform music influencers on Spotify. At a stroke, it’s created a platform for anyone (well, anyone using Anchor) to play radio DJ, hosting their own shows with music.

It’s the ‘Pump Up The Volume’ vision expounded by startup Stationhead back in 2017, albeit not live radio – although that company added an on-demand/archive feature last year too – and it paves the way for people to start shows, build an audience, and generate significant streams (and thus royalties) for the music they feature. 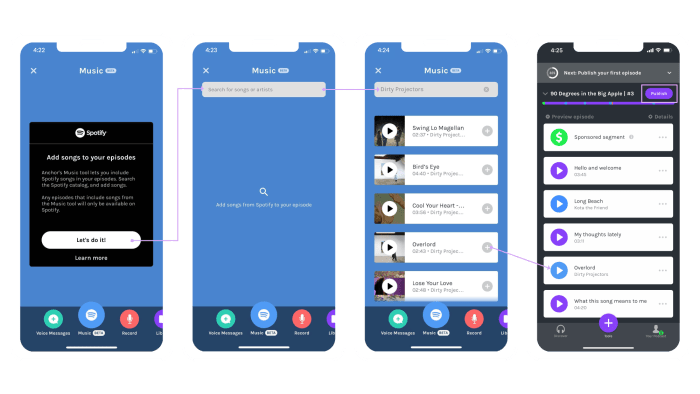 Oh, and thanks to Anchor’s monetisation features, they’ll be able to make money from these shows too – a financial model for curation that hasn’t previously been available for independent playlist curators.

YouTube, Instagram and TikTok all have their communities of native creators – people who found an audience first on that platform, with content honed for its culture and features. Could Spotify’s new podcast format nurture an equivalent community for the streaming service – a native tribe of music podcasters?

Spotify’s new format could also encourage more artists and labels to experiment with podcasts, whether explaining a new album or navigating through a bulging back catalogue.

There’ll be some questions around all this. For example, traditional licensing for podcasts, such as it was, fell into the domain of sync licensing, so will shifting it to a regular streaming-payouts model ruffle feathers in some quarters in terms of what that means for the division of these revenues?

(Not that Spotify’s move destroys the idea of sync licensing for podcasts: there will still be opportunities for shows to license music for background and theme use, for example.)

There’s also the Spotify-exclusive nature of this to consider. Will it encourage rivals like Apple and Amazon to figure out their own ways of integrating music streams into podcasts? Will music shows be able to span them all, or will each platform end up with its own separate ecosystem of music podcasts?

We’re going to find out. It’s good that Spotify’s podcasting strategy involves experimenting with the format itself – and opening up that experimentation to the wider world – alongside buying studios, developing original shows and shovelling money at Joe Rogan.

If the next Joe Rogan starts out making an Anchor-powered, royalty-generating music podcast, that’s exciting for Spotify and rightsholders alike. And don’t forget the even bigger picture here: Spotify’s desire to compete not just with Apple Music, Amazon Music and co, but to compete with and ultimately replace broadcast radio.

A new wave of daily and weekly radio-style shows with full music tracks included? Seems pretty useful with that goal in mind…

We don't have space here to go into the full lunacy of the QAnon conspiracists movement, and the unwillingness of the actual US president to disavow it. Suffice to say that YouTube, Facebook and Twitter are among the...
Read More

Back in April 2019, Universal Music announced a partnership to develop original shows with one of the biggest podcast production companies, Wondery. 18 month later, the first show is coming out this weekend. It’s called...
Read More