Spotify is testing a new feature that will enable artists and labels to boost specific tracks in the recommendation algorithms for its radio and autoplay features – if they agree to a “promotional” (i.e. lower) royalty rate for those streams.

Autoplay is the feature that automatically plays other songs when you reach the end of an album or playlist, while Radio is the section of Spotify that generates radio-like stations based on specific songs and artists.

Spotify is calling the new feature ‘Discovery Mode’ (an industry-facing term) and will initially test it with artists and labels in the US, rolling it out further if it is successful. The promotional rate will only apply to recording royalties: the publishing royalties for these tracks will remain the same.

Here’s how the streaming service is describing its plans in a blog post this afternoon:

“In this new experiment, artists and labels can identify music that’s a priority for them, and our system will add that signal to the algorithm that determines personalized listening sessions. This allows our algorithms to account for what’s important to the artist — perhaps a song they’re particularly excited about, an album anniversary they’re celebrating, a viral cultural moment they’re experiencing, or other factors they care about.

To ensure the tool is accessible to artists at any stage of their careers, it won’t require any upfront budget. Instead, labels or rights holders agree to be paid a promotional recording royalty rate for streams in personalized listening sessions where we provided this service. If the songs resonate with listeners, we’ll keep trying them in similar sessions. If the songs don’t perform well, they’ll quickly be pulled back. Listener satisfaction is our priority—we won’t guarantee placement to labels or artists, and we only ever recommend music we think listeners will want to hear.

We’re testing this to make sure it’s a great experience for both listeners and artists. To start, we’ll focus on applying this service to our Radio and Autoplay formats, where we know listeners are looking to discover new music. As we learn from this experiment, we’ll carefully test expanding to other personalized areas of Spotify.”

Music Ally talked to Spotify’s product marketing lead Charleton Lamb ahead of the announcement, to understand what the streaming service is doing with the latest of its promotional tools for artists and labels.

“Historically, a lot of those tools have been focused on promoting new music: really focused on release week. We are driving 16 billion discoveries a month. That’s 16 billion times fans are listening to artists they’ve never listened to before on Spotify,” said Lamb.

“So artists are really happy with those tools, but when we talk to them, they say they want more tools outside of release week, and especially for catalogue music. And we agree.”

Some of Spotify’s previous promotional tools have charged labels: its ‘Marquee’ full-screen pop-up album recommendations for example. Discovery Mode is the first where the payment will come in the form of a discounted royalty rate.

It’s a bold move, to say the least, coming in a year when artist unrest around streaming royalties has surged – as (and, indeed, because) their live incomes have fallen off a cliff. Lamb outlined Spotify’s argument for its new feature.

“What was really important was that we wanted to be accessible to artists at any stage of their career. It won’t require any budget upfront. The model is accessible, democratic, it’s more fair. You don’t have to pony up cash,” he said.

Lamb reiterated that the promotional rate only applies to streams from Spotify’s radio and autoplay modes when an artist or label has opted in to Discovery Mode.

“It does not mean lower royalties,” he added. “If a track is performing well, rightsholders can see a positive ROI [return on investment]. And if they don’t, they can turn it off.”

That’s going to be an important thing for artists and labels in the test to figure out: whether a track can generate more money in total with Discovery Mode turned on, even with the lower rate from radio and autoplay streams, than it would have made without it.

The obvious question: what is that promotional rate? Spotify isn’t saying at this point, although you can expect it to quickly leak once the first royalty statements arrive for artists and labels who are part of the test – even if they have signed an NDA, these figures have a habit of finding their way into the media.

As for the geographic rollout: “We’re just in pretty early days of testing, working with a small number of partners in the US,” said Lamb. “But our intention is to make this globally available, and as we’ve done with other artist tools, we start small and take it larger.”

He confirmed that songwriters will not take a hit from artists and labels opting in to the new feature – “It is only for recording: publishing won’t be affected” – and that the test does not involve Spotify’s personalised playlists like Discover Weekly.

(Note the “As we learn from this experiment, we’ll carefully test expanding to other personalized areas of Spotify” part of the blog post on that score, however.)

One question Music Ally had: could a label opt in to Discovery Mode without an artist’s permission, or vice versa? Who gets to control this? That’s something that Spotify is leaving down to labels and artists/managers to agree between themselves.

They will be able to opt in to Discovery Mode for several tracks at once, not just one at a time. Deciding which, when and for how long will (hopefully!) be part of the regular marketing discussions between artist teams and labels. 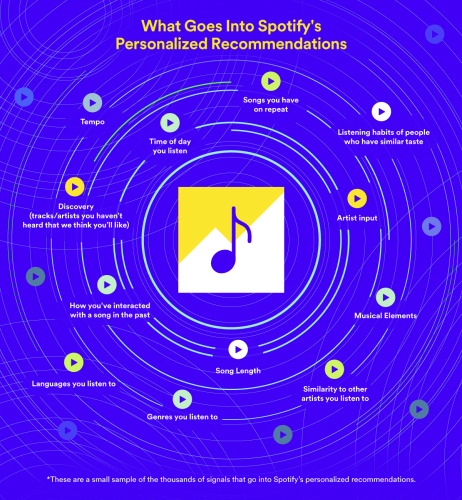 Alongside today’s announcement, Spotify is publishing this graphic showing a few of the signals that go into its recommendations: ‘artist input’ represents Discovery Mode.

Another key question: will artists feel pressured to use the new feature, in fear that their music will be discovered less often in Spotify’s radio and autoplay modes if they do not? Lamb presented it as a positive tool instead.

“This is an opportunity to add an extra signal [to the recommendation algorithm] when you think your songs are underperforming. Our job is to give you the data to be able to make that choice, and to really understand it and make an informed decision about what you’re trying to do with your music,” he said.

Radio and autoplay are “a pretty significant chunk of listening on the platform: the place where a lot of music discovery is happening” but Lamb stressed that there are a number of other places on Spotify for that too, and that Discovery Mode is still only one signal among many that feed in to the algorithm.

“There are over 300 million listeners we’re making personalised recommendations for. There’s a lot of room to be successful,” he said. “We’re going to try to build tools that scale with those numbers.”

As with any Spotify announcement, it’s important to remember two distinct audiences who’ll be responding to it: musicians and the music industry on on side, and investors on the other.

Investors (and the analysts who represent them on quarterly earnings calls) are keen on Spotify’s artist tools and wider ‘two-sided marketplace’ strategy, so a new tool that could lower the royalty rate for listening on a “significant chunk” of streams may go down well.

And the other audience? We’ll get the response of the music community almost as quickly, via social media for musicians and (if they’re not happy) via the usual trade outlets for labels.

Will artists outside the test be concerned that those within it are getting plays that might otherwise be theirs? And will they feel pressured to opt in once it rolls out more widely, for fear of losing out if they don’t? We’ll be monitoring the reaction this evening, while bearing in mind that there will undoubtedly also be artists keen to try out the new feature.

Another quick thought. Spotify testing different royalty rates for some ‘passive’ streams (i.e. served up to the listener by the algorithm, rather than chosen by them) will be of intense interest to the people preparing for the UK Parliament’s upcoming inquiry into streaming economics.

One of the strands of that enquiry is likely to be a discussion of whether passive streams should be treated like radio spins, with “equitable remuneration” ensuring a bigger chunk of the royalties go to artists rather than to labels.

To be clear: today’s announcement of Discovery Mode has nothing to do with the debate on equitable remuneration. But advocates for the latter model may well be encouraged by today’s news as a sign of Spotify’s technical ability to separate out (some) passive streams, and use a different payouts model for them.

One final note. Discovery Mode is a test, and not all Spotify’s tests end up rolling out globally, even if that’s the initial intention.

The company launched a tool for artists to upload their music directly to its service in September 2018, but after a… let’s call it ‘spirited’ response from labels, the tool was shut down in July 2019.

All the more reason to see how labels react to today’s announcement, and how they calculate its potential impact on their revenue from Spotify. Calculations, of course, that will rely on the data generated by exactly the kind of test that Spotify is launching.