The opening keynote for this year’s Sandbox Summit Global conference is a digital veteran in the true sense of the word. Richard Ayers’ CV includes stints in digital media across all forms of entertainment including music, film, book publishing, online news and newspapers.

He helped launch BBC News Online back in 1997, ran an entertainment portal (remember when there were such things as portals?) for Tiscali in the early 2000s, and headed up digital business development for the British Film Institute in the latter half of the same decade.

But it was after a two week consultancy for the then-fledgling digital operations of Manchester City FC turned into a full-time position that Ayers really made his name, ultimately becoming something of a digital guru in the sports world, particularly with football clubs.

Ayers is widely credited with establishing Manchester City’s reputation as one of the leading digital players in the sports world through its fan engagement and digital strategies. He then set up his Seven League consultancy and was taken on by football clubs including FC Barcelona, Juventus and Leicester City as well as sports bodies including FIFA, UEFA, The FA and Premier League, NBA, NFL, NHL, Sport England, and 53 of the football associations in Europe as well as  Minnesota Vikings and England Netball.

If anyone is qualified to talk about lessons from other sectors for the music industry, particularly when it comes to football (and sport in general) which shares so many common issues with music from fandom and community engagement to the importance of live (both of which have suffered so much from the recent pandemic), then it is Ayers.

Ayers spoke with Music Ally ahead of his keynote where he will be presenting the ‘Seven Key Trends’ from the world of digital sports and entertainment, which music marketers and the wider music industry should be aware of.

Among them… Football, like so many other sectors including music, has had to grapple with recent changes around privacy and data. Ayers will be talking about the importance of building trust to help build those fan relationships in a more tightly controlled environment.

Sadly, football has also been witnessing increasingly escalating abuse levels, often racist in nature, via the main social media platforms and Ayers has some interesting thoughts on the implications for fan communities. As the platforms themselves can’t control the problem, Ayers sees football fan communities developing in a much more atomised and fragmented way, as the sport and its stars try to deal with the trolls who are venting their vitriol publicly.

Ayers is also a big fan of how technologies like augmented and virtual reality can be used to enhance the live (or even post-live) event experience. He sees a parallel between the desire of music fans to be ‘in the band’ (or at least as close to the band including going behind the scenes) and the way sports fans feel, and believes this space will develop much further over the coming years.

Separately, Ayers has recently set up a company, Rematch, to focus on what he calls ‘re-imagined immersive experience’. It’s about helping fans to relive iconic sporting moments and started in 2019 with a Rematch of the 1980 Wimbledon Championships – featuring the Men’s Singles final between Bjorn Borg and John McEnroe.

It used a mix of archive film, choreographed live actors, projection, original score, period costumes and props, to produce a complete reimagination of the match. Is there scope for similar ideas to be applied to famous musical moments or events? We’ll find out at Sandbox Summit Global, alongside other themes including the importance of direct-to-consumer, and the rise of audio.

Ayers is the keynote speaker on day one of the conference, which will explore lessons and opportunities for music from other sectors. We’ll also have campaign presentations from Lego UK and Pringles; a panel of expert label executives; a session with Roblox developer Melon; a Music Ally Learn live presentation on marketing music through games; and the unveiling of Crowdcat’s Colabox, a platform helping artists and labels to launch listening parties, minigames and user-generated content campaigns.

Sandbox Summit Global is taking place from 3pm BST from Tuesday 25th May to Thursday 27th May 2021. Tickets are on sale now. If you are an artist manager, independent label employee or startup, please contact Anthony for concessions and limited free tickets, as well as corporate group discounts.

Photo by Vienna Reyes on Unsplash 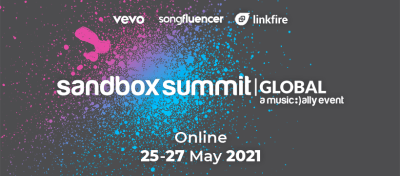 What can the music industry learn from sports and other sectors?

The evolution of podcasts: ‘I hope that the industry diversifies’

"I remember looking for podcasts hosted by Black people. I think I found four in the UK!" Renay Richardson is the CEO of podcast production company Broccoli Content, and also a prime mover behind the 'Equality in Audio...
Read More

The final day of Music Ally's Sandbox Summit Global online conference had a practical focus on music marketing, with two panels of experts offering their advice. First was a 'tips from the top' session picking the brains...
© Copyright Music Ally All rights reserved 2021 - Website designed and maintained by