Hipgnosis plans to raise £150m from latest sale of shares

Hipgnosis Songs Fund wants to buy more songs for its fund, but to do that it’s going to have to raise more money. And so it is: the publicly listed company is going to be selling £150m (around $211m) worth of shares to fuel its next round of catalogue acquisitions.

Hipgnosis said it plans to use the funds “to acquire a substantial pipeline of songs”, with founder Merck Mercuriadis pitching the sale as giving “our public markets investors, historic and new, the only chance for the next 12 months to get access to Hipgnosis’ existing portfolio as well as a pipeline comprising some of the most important and successful songs of all time, at valuations that are highly attractive considering the continued explosive growth of streaming that will magnify future revenues considerably”.

The news follows the announcement earlier this week that Vania Schlogel has joined the Hipgnosis board as a non-executive director. She is the former chief investment officer at Roc Nation, and current chairwoman of Epidemic Sound.

Lyric Capital Group is the owner of independent publisher Spirit Music Group, having led a buyout of the company in 2019.
Read More 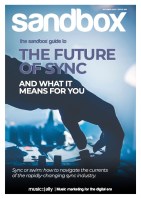 The Sandbox Guide to.. The future of sync, and what it means for you

Today, hundreds of thousands of artists release music and an equally huge number of content creators require music for their output. Sync has become a more nuanced instrument for all involved – and one that’s still a...
© Copyright Music Ally All rights reserved 2021 - Website designed and maintained by