With more than 28.6 million followers, Today’s Top Hits is Spotify’s biggest playlist by some distance. It has generated more than 1.4bn hours of listening and 27.3bn streams to date according to Spotify, having playlisted more than 600 artists.

The streaming service has recently given it a rebrand, with a new design, increased use of the ‘TTH’ acronym, and a glossy video featuring Billie Eilish, Travis Scott, Dua Lipa, Bad Bunny and Blackpink.

Spotify’s head of global hits Ned Monahan talked to Music Ally ahead of the rebranding announcement, and we took the opportunity to pick his brains on how Today’s Top Hits is curated, and how Spotify balances inclusions between big stars and emerging artists.

First, that rebrand. “As our largest, most internationally representative global playlist, we identified the opportunity to position TTH as our global music brand,” said Monahan.

“The campaign has been a truly cross-functional collaborative effort across so many different teams at Spotify. The marketing team, the social team, branding creative, artist and label partnerships, personalisation, content promotion… Literally any department you can imagine at Spotify has gotten involved in this.”

That suggests the high stakes in making any changes to such a key playlist for a streaming service, although Monahan stressed that the revamp focused on external perceptions of Today’s Top Hits.

“Nothing is changing about the curation and what type of songs we include in the playlist as a virtue of this rebrand. It’s more: we’re telling the story of it in an outward way.”

From the outside, curating a playlist promising the biggest current hits sounds like an easy job: get the data on the 50 top tracks; slap them into a playlist; job done. But Spotify already has its Top 50 Global chart for that – which is effectively a playlist.

There is clearly plenty of crossover: at the time of writing the current hits from Olivia Rodrigo, Rauw Alejandro, Lil Nas X, Bad Bunny, Doja Cat and SZA, BTS, Dua Lipa, and Justin Bieber feature in the top 10 of both.

Monahan outlined the additional factors and process behind the curation of Today’s Top Hits, though. The playlist’s major weekly update is every Thursday, although occasionally a track will be added earlier “if a song has come out and surpassed expectations or done something we didn’t expect it to”. The sequencing is also tweaked between major updates.

“At the start of the week we may have three or four songs that [we think] we may add at the end of that week, but at the end of the week after all our discussions, and watching the songs evolve and perform, we may end up with a completely different list of songs!” he said.

What factors influence that beyond pure stream count? “Organic consumption trends is one of the key ones. We’re looking at whether demand is increasing for a track both on and off platform. How big is it in relation to how other songs in that genre, or that general ballpark are performing,” said Monahan.

“Cultural relevance is also pretty important: it’s important that the list reflects but also drives cultural conversations. Sometimes there might be things that are not performing well enough, or gigantic, yet, but reflect the culture in a way that leads us to take a punt.”

How tracks are performing on Spotify’s other playlists is also a big factor, particularly for playlists that the company knows “correlate quite closely with how a song will perform on TTH”.

Release schedules are another element in the playlist’s ebb and flow of new additions. “Some weeks you may have a big blockbuster week of superstars releasing music, and the adds to TTH will be mainly bigger, well-known artists,” he said.

“Other weeks if there’s less star power, you may see more developing artists get added to the list. That’s the beauty of the playlist: you can see a superstar like The Weeknd or Dua Lipa next to an emerging artist like a Kid Laroi or a Zoe Wees.” 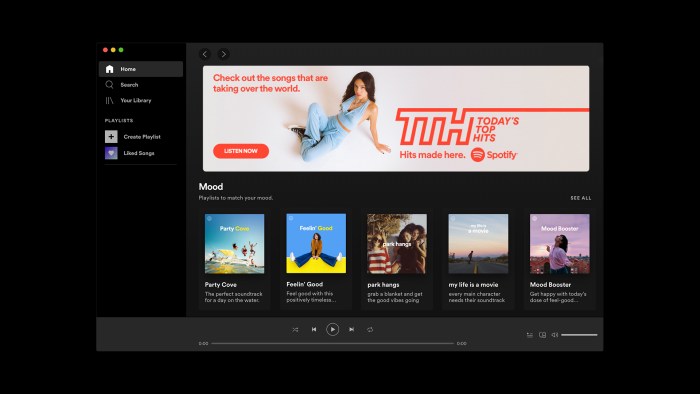 It’s slightly unexpected to hear Spotify enthusing about Today’s Top Hits as a playlist for breaking emerging artists, rather than simply reflecting the biggest hits. But the breaking aspect is something Monahan was keen to stress.

He cited the example of Tate McRae, whose track ‘you Broke Me First’ was her breakout single, performing so well on Spotify’s pop playlists that the company added it to Today’s Top Hits in July 2020.

“It helped the track grow month-over-month 73% from July to August, and it continued to grow in August, up 91% month over month. In September, the streams from TTH had more than doubled, up 137% as the song continued to perform well,” said Monahan.

“The song has today over 630 million streams [658m by the time this article was published], and although it was released in April last year, it didn’t reach its peak until October. It took six months to reach its peak of about 2.9 million daily streams.”

“It’s remarkable to see that path of a song, and an artist that has been releasing music for a while, building an audience. It gets to a point where they have a song that seems to be doing something special. We take the early bet, it pays off, and we get to really help her build her audience on platform,” he continued.

“There are other examples where it doesn’t necessarily pan out with the greatest effects. But the bottom line is that when you add a song to TTH, it gives an artist a chance to reach a much broader audience.”

This idea of songs growing over time is a familiar one in the modern streaming era. Dua Lipa’s ‘Levitating’ is another example: the DaBaby-featuring remix has been one of the biggest tracks on the playlist, even with a sluggish start.

When it was first released, its streams took time to build, so Spotify did not add it to Today’s Top Hits in its week of release. But as it grew and performed strongly in other Spotify playlists, it was added to the flagship.

“The song has essentially had two or three separate peaks, where it’s just grown and grown, and then had a bit of a fall-off, and then got to an even bigger peak and fallen off a bit, then started growing again,” said Monahan.

“Even for a huge artist like Dua Lipa, songs can come out and grow consistently, and have real lives where they get put into different contexts.”

“Other songs come out and instantly out of the gate are gigantic, like Olivia Rodrigo’s ‘drivers license’, which was bigger [in its first weeks] than literally anything else has ever been. And it has this gigantic initial streaming period and then gradually starts to decay. There are a variety of different paths that songs take now.”

How are listening habits changing for a playlist like Today’s Top Hits? Generally speaking, the biggest hits are at the top: it’s not sequenced to group songs of the same genre together or create some other kind of narrative flow. Even so, it gets listened to in a linear way.

“It’s not a list where people skip through and go to specifically save certain songs. It’s really a list where we see people put it on at the top and let it play,” said Monahan.

“You can clearly see the songs at the top get the most plays. We’re trying to put the biggest hits at the top because that’s what people want to hear. People are putting this playlist on and they’re just letting it play and they’re discovering new things as they go.”

Like a top-40 radio station? Well, Monahan suggested that there are still some differences to that traditional format.

“There are a lot of songs in the playlist that are newer at the top, and a lot of songs that have been there a while. It’s a mix of new and old, but when you compare it to top 40 radio it moves quite a bit faster,” he said.

“We’ll often have a song in the playlist for six to nine months that started out as a developing artist we were taking a bet on, that will have reached a peak at radio just as it’s coming out of Today’s Top Hits.”

Trouble at the 'audio first' mill, or just inevitable reorganisation as part of the growth process? Spotify is shutting down one of its internal podcast studios.
© Copyright Music Ally All rights reserved 2022 - Website designed and maintained by