Amazon Music has a good one this week: a deal with video streaming service Disney+.

New Amazon Music Unlimited customers can get six months of Disney+ “on us” bundled into their subscription, while current and former subscribers can get three months of it. After the period ends, they’ll start paying $7.99 a month for Disney+ as per its regular subscription plan.

As partners go, it’s an impressive coup: Disney+ raced to 116 million paying subscribers by the end of June this year, having only launched in November 2019 in North America. It’s part of that bigger picture of the music DSPs trying to widen their funnels: see also Spotify’s recent campaign offering three or four months’ access to its premium tier to TikTok users in several European countries. 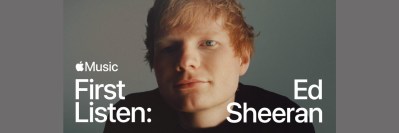 Ed Sheeran marketing campaign ramps up with Apple and Amazon

As Ed Sheeran prepares for the release of '=' on Friday (29 October) the DSP partnership announcements are dropping in quick succession.
Read More

Adele released her comeback single 'Easy On Me' on Friday, and late that day both Spotify and Amazon Music announced that it had broken records on their services.
© Copyright Music Ally All rights reserved 2021 - Website designed and maintained by