Earlier this month, we reported on news of a “new music & audio company inside Amazon” being led by former Techstars Music director Jen Hall. Now there may be more details on what’s afoot, as The Verge reported that Amazon is “building a new app, codenamed ‘Project Mic,’ that gives anyone the ability to make and distribute a live radio show, complete with music.”

So, a cross between Clubhouse and Spotify’s ‘Shows with Music’ podcast format, which the report claimed will be accessible through its own app, but also through Amazon Music, Twitch, Audible and Amazon’s range of Alexa-capable devices.

“Anyone will be able to pull from Amazon’s music catalog to arrange their program. For launch, the company is planning to recruit celebrity talent along with smaller tastemakers to help launch the app and populate it with content,” claimed The Verge.

We say ‘Clubhouse meets Shows with Music’ but there’s a more direct comparison here: startup Stationhead, which launched its user-generated radio app back in March 2017, using Spotify’s API to pull in music, so that every listener would generate royalties for the tracks used. In the years since, it added an Apple Music integration and the ability to record live shows to make them available on-demand.

Stationhead increasingly looks like a harbinger for the radio-like ambitions of some of the biggest streaming services. ‘Project Mic’ should sit neatly alongside Amazon Music’s exploration of live content through its work with Twitch and livestreams.

And Spotify? We can’t help wondering whether it already has plans (and if not, whether Amazon’s project might spark some) to expand its Shows with Music format to its own live audio app, Spotify Greenroom… 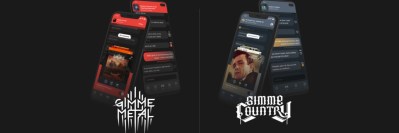 Right from the start, streaming radio startup Gimme Radio has offered artists DJing slots on its schedules, and ways to make money from that.
Read More

Gimme Radio is the startup that offers streaming radio stations focused on metal and country music.