This is a guest post written by Dr. Ari Katorza, Amir Graitzer and Doron Gabbay of AI music analysis platform MyPart. Previously, MyPart analysed a series of Afrobeats tracks for Music Ally and compared them to hit songs from around the world – this time we wanted to know if AI analysis could reveal what turns a song into a TikTok hit. They looked at the musical styles, lyrical content, and compositional tricks that top TikTok tracks tend to share.

With over 176 different songs surpassing the one billion TikTok video view mark in the last year alone, TikTok has proven to be somewhat of a benchmark of success. It wields the influence to land record deals for virtual unknowns (over 70 artists and counting, according to the app’s 2020 Music Report), transform content creators into global superstars (see: Lil Nas X), and help dictate chart positioning, catapulting 15 tracks that trended on the app in 2020 to the very top of the US Billboard Chart. 75% of TikTok users say they discover new artists through the app, and 63% of users heard songs for the first time on TikTok.

Its impact is not merely limited to newly released music, either. TikTok can revive old hits, as well, propelling Fleetwood Mac’s “Dreams” back into Billboard’s Hot 100 after a whopping 43-year absence, and amassing over 200k video views for Kate Bush’s 1980 classic, “Babooshka.”

The app can breathe new life into forgotten, throwback tunes, like Boney M’s “Rasputin,” or Natasha Bedingfiled’s “Unwritten,” with nostalgia-fueled trends that see a new generation of users dancing and singing along to songs dropped well before they were even born.

Scanning the fairly diversified list of TikTok’s most successful songs – from Drake’s “Toosie Slide” and Doja Cat’s “Streets,” to Britney Spears’ “I’m a Slave 4 U,” and Michael Jackson’s “Billie Jean” – one might wonder: are there notable, unifying characteristics that contribute to their virality? Is there some sort of magic formula to TikTok success? Additionally, if some sort of blueprint does indeed exist, what is its consequential impact on the music industry?

We dove a bit deeper under the surface with the help of MyPart’s artificial intelligence powered SongCrunch tool to analyze a collection of songs – both contemporary and throwback – that have seen major success on TikTok. SongCrunch uses a wide range of algorithms including Artificial Intelligence models to extract insights regarding songs’ lyrical, musical, and sonic features for a variety of purposes, including identifying industry trends, advanced song search, discovering new songwriting talent, and more.

We analyzed sixteen hit songs that achieved viral fame on TikTok over the last three years (eight new releases and eight “throwbacks” released pre 2018), and compared them to 5,000 top charting songs over that same time span.

SongCrunch’s compositional analysis suggests that TikTok hits tend to be exceedingly simplistic, demonstrating less musical complexity than average chart-topping songs from the past three years. Akin to a basic nursery rhyme, TikTok harmonies are highly diatonic (in key), and have a comparatively low number of distinct (‘unique’) chords and overall amount of (‘total chords’). For reference (see below graph), the amount of chords used (“number of chords”) in top-charting songs examined ranged from ten (minimum) to a few hundred chords (maximum), while the TikTok hit average featured only about 90 total chords. Interestingly, both new and old TikTok wonders use virtually no modal connections and secondary dominants.

Melodically speaking, TikTok hits use more perfect unison (repeating the same note consecutively) than the average chart-topper, and have longer sequences of vocal hooks. All of these traits lend themselves to formulaic, repetitive, familiar-feeling tracks that make them easily memorizable, and thus poised for TikTok appeal. Regarding tonality, while the top-charting average splits almost equally between major and minor scales & modes, TikTok hits are largely minor scale oriented.

It should come as no surprise that the top hits on TikTok scored higher in SongCrunch’s danceability category than the average of the top-charting songs at hand, with the vast majority of the app’s most widely-shared videos featuring some sort of interactive dance challenge or DIY choreography. Additionally, TikTok and top-charting songs share similarly fast BPM/tempo. 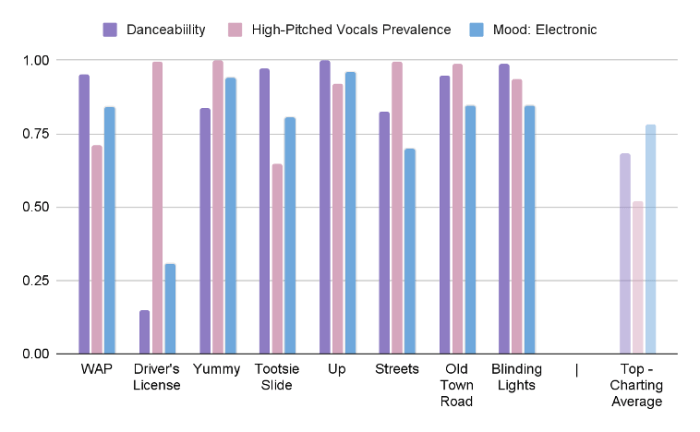 From the trap of Cardi B to the falsetto of The Weekend, most of the TikTok hits feature predominantly female/high-pitch vocals (compared to a near even split between high-and low-pitched vocals amongst top-charting songs). The songs span a wide range of genres, from pure pre-teen pop to trap and hip-hop bangers. TikTok songs also portray a curiously darker timbre.

The most prevalent moods and themes revealed by MyPart’s analysis of TikTok’s top contemporary songs were electronic, happy, and party, whereas a focus on older songs championed by TikTok users (including “I’m Just a Kid” by Simple Plan, “Ridin Solo” by Jason Derulo, and “Touch It” by Busta Rhymes) showed them score higher on “sad,”an emotion often induced whilst experiencing nostalgia.

TikTok hits are more romantic, and more concerned with breakups than the average chart song. On the TikTok smash, “Driver’s License”, for example, Olivia Rodrigo’s raw, simplistic lyricism would resonate with virtually anyone who has ever experienced heartbreak. 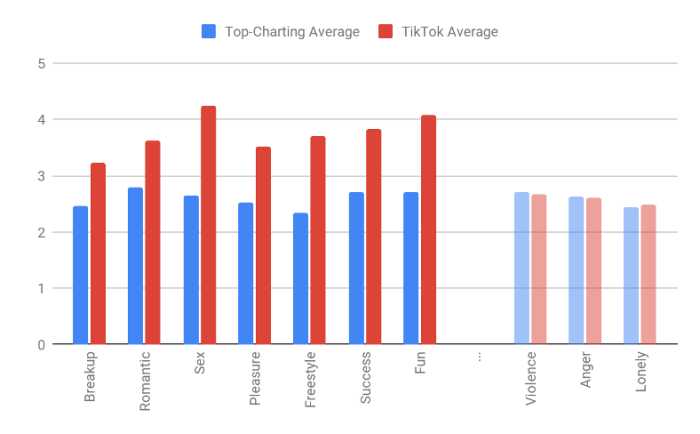 Lyrical Writing Style: Simple and Straight to the Point

TikTok sensations tend to arrive at the chorus faster than the top-charting songs, helping them instantly capture their listener’s attention, a feature critical to garnering popularity on an app proven to favor shorter (under 15 seconds-long) videos. They include more slang and abbreviations, are highly repetitive, have fewer rhyme groups, and feature more perfect rhymes at ends of lines. These characteristics insinuate less complexity and a triteness in musical quality, yet are all integral ingredients to their public appeal.

The above deep dive appears to imply that, with few exceptions, the most basic, repetitive, danceable tracks have been more likely to achieve mass TikTok popularity. This begs the question: with the app now proving it’s unquestionable impact on the industry, is TikTok also affecting the way artists make music? Do these TikTok standards leave room for creativity or innovation?

On her New York Time’s “Diary of a Song” episode, Olivia Rodrigo said that she intentionally added a cue into ‘drivers license’ that she knew could work well for TikTok transitions. Justin Bieber was criticized for the great effort he seemed to invest in getting his single ‘Yummy’ to go viral on the app. With its simplistic, highly-repetitive lyrics, and gimmicky, almost childish musical production, “Yummy” was perceived to be very blatantly calibrated for TikTok success. That such a well-established superstar would go to such great lengths to conform to the TikTok blueprint has a lot to say about the power of the app right now.

The Ringer reported that record labels began working with artists to make their music more suitable for TikTok videos, and the app’s music division “now regularly meets with artists and celebrities to offer tips on how to excel on the platform,” with top users receiving weekly emails with instructions on what type of videos will help increase their exposure. There is a carefully-managed curation process, with TikTok executives actively deciding which videos end up on trending pages.

Whilst TikTok can be credited for evening the playing field between unknowns and stars by claiming to give all content creators the equal chance to attain mass exposure, the app clearly seems to favor familiar-sounding pop best suited for meme-able dance trends.

Thus, whilst it would be a stretch to assert that there is some kind of particular, full-proof formula for success, our above research appears to provide a rough guide.

If you’re looking to achieve TikTok fame, we’d recommend your song conform to the following standard: have a catchy, danceable, electronic beat; exude a happy, party mood; use simplistic, relatable profanity-free lyrics; have a familiar-sounding melody; and employ repetitive, flowy rhymes that lend themselves to easy memorization and interpretive dance moves. Simple, right? Well, even Steve jobs once said: that “Simple can be harder than complex”. And he didn’t have to compete with the likes of Drake and The Weeknd! 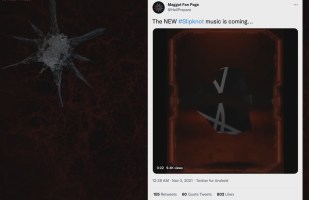 There are several interesting stories about TikTok today, so we're bundling them up, starting with The Information's report that parent company ByteDance is on course to grow its revenues.
© Copyright Music Ally All rights reserved 2021 - Website designed and maintained by