NetEase is firing up the engines on the IPO for its music streaming service NetEase Cloud Music, and that includes some new figures on the size of the latter. By the end of September 2021, the service had 184 million monthly active users, of whom 27.5 million were paying customers. Those figures have grown from 105.1 million and 4.2 million respectively in 2018.

Note, like rival Tencent Music, NetEase Cloud Music isn’t just about streaming: it also has a range of ‘social entertainment’ services. Those generated RMB 2.67bn ($418.3m) in the first nine months of 2021.

The company is keen to stress the community aspects of its streaming service though: it notes that in June 2021, around 27% of its active users “generated content” – comments, blog posts and playlists for example. 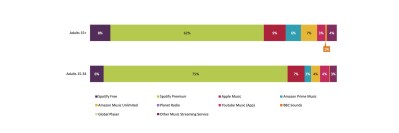 The latest global-streaming milestone hit by an African artist goes to Davido, who has just reached the 1bn streams mark on Spotify.
Read More

With exclusive licensing deals off the table in China, streaming services are moving to expand catalogues with non-exclusive agreements.