Emerging markets will represent the majority of global music subscribers by 2026, and this is going to drive the next wave of evolution for music distribution companies.

That’s according to Mark Mulligan, MD of Midia Research, who outlined his predictions for distributors in a keynote at the NY:LON Connect conference yesterday.

In his talk, he defined ’emerging markets’ as essentially “most of the world that is not Europe, not North America, and not the bigger Asia Pacific markets”. So: Latin America, Africa and the Middle East, Russia, Eastern Europe and most of Asia bar Japan and South Korea.

“This is where the bulk of subscriber growth is going to come from,” said Mulligan. “It’s going to have a really big impact on the culture of music.”

Why? Mulligan suggested that in the pre-digital era, the biggest recorded music markets were the “big high-per-capita GDP markets… because people could afford to spend money on music, so as a consequence that’s where all the investment happened: the big record labels and publishers and artists were in those markets”.

“It meant that big, populous countries, the countries which have got really big populations but low per-capita GDP never really got that investment. They never got the thing that enabled the growth of the music scenes.” 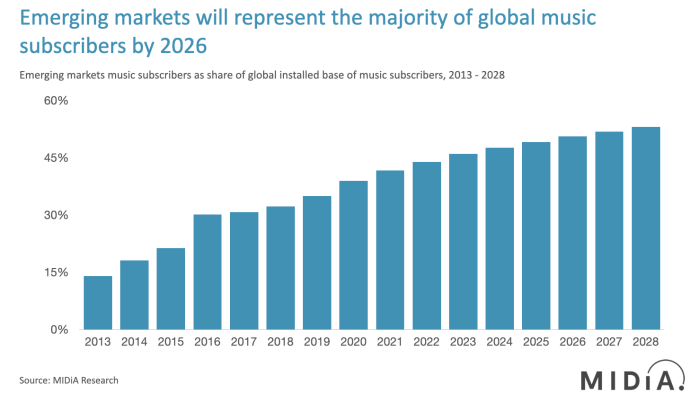 ‘The music culture of emerging markets is booming’

Now, however, with huge and growing numbers of “monetised free users” in countries like China and India, with the predicted growth in subscribers too “it’s creating a vibrancy in these local music scenes that didn’t exist before”.

“The music culture of emerging markets is booming like it has never done before, and that will accelerate over the coming years.”

Mulligan moved on to the implications for distributors, and suggested that their approach to these high-potential markets may change from push to pull.

“Think less about: hey, how easy it is going to be for a Canadian label to get their music played in Indonesia? And instead think about all of those Indonesian artists wanting to be heard in Canada,” he said.

“It’s going to act as a catalyst for the exporting of emerging markets’ music into the world. Clearly it’s already started to happen; that will happen many orders of magnitude over in the coming years.”

Mulligan went on to say that emerging markets “are going to be the engine room of growth for streaming users and subscriber growth, bit less in revenue. They’re going to be export markets rather than import markets”.

He suggested that international repertoire is “already a minority of listening in most emerging markets” with the prospect of even more competition from local artists in the future.

“The growth of streaming is creating these regional music scenes that may end up challenging a lot of the western scenes, whether you’re looking at Afrobeats or you’re looking at Puerto Rican artists, we’re beginning to see some Middle Eastern artists exporting. I still think we’ll have a bhangra number one on the Spotify Top 100 within the next couple of years,” said Mulligan.

“It’s this internationalisation of music which is a really nice counterbalance to how it looked five years ago, when it looked like streaming was maybe going to globalise – i.e. everybody was going to have to sing in English… that’s clearly not the case any more.”

“And so the distribution market is going to be increasingly shaped by the capabilities to bring emerging markets’ music to the west.” 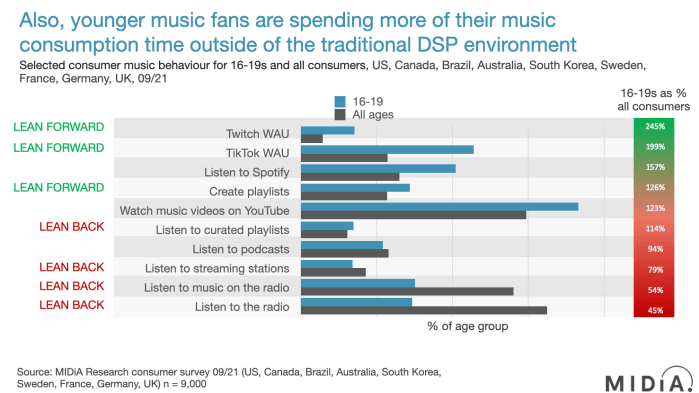 ‘The attention economy is saturated’

Earlier in his keynote, Mulligan talked about shifts in the way music is consumed, and what that’s likely to mean for distributors. One of his key points was the competition for time between streaming services and social apps.

“Digital service providers like Spotify etc are losing share of revenue and time to social apps. That doesn’t mean their revenue is declining. It just means that of the time that people are spending with music, more of that is happening outside of streaming,” he said.

“If you’re a teenager spending two or three hours of your day on TikTok, and on TikTok you’re listening as well as watching, you’re not going to have a streaming service open in the background as well. So there is competition, even though they’re very different things.”

That’s a landscape in which distributors are working with these social platforms as well as with DSPs, to ensure their artist and label clients are able to capitalise on the trends.

That was Mulligan’s wider point: that as more music consumption and activity happens outside the main streaming services – not just TikTok, but on platforms like Twitch, Splice and more – distributors will need to continue evolving.

“More and more music behaviour on both supply and demand side is happening outside the traditional streaming market,” he said.

“Western music streaming services will probably need to work out how to embrace a bunch of this stuff. Which means that distributors are going to have an even richer and even bigger toolkit necessary in order to cater for these sorts of things.”

Mulligan’s keynote was part of the ‘The Future of Distribution’ track at NY:LON Connect, which was sponsored by The Orchard. Music Ally co-runs the conference with Music Biz, and you can read our other reports from this year’s event here.

While you’re here… There’s a new module on the Music Ally Learning Hub, our online learning platform training people in music marketing and the wider music business. The module is called ‘Distribute: How to Pick the Perfect Distributor for Your Music‘. It focuses on the process of distributing your music to streaming services and different types of service providers on the market.

The idea of songs being “leaked” in the early internet era had an illicit thrill, but the concept has changed somewhat since it became clear that considerable social media excitement followed a leak
Read More

SoundCloud bought distribution firm Repost Network in 2019 as part of its plan to double down on tools and services for independent artists.
Read More

How do SoundCloud’s ‘fan-powered royalties’ work for artists?

SoundCloud revealed its 'fan-powered royalties' plans in March 2021, applying them to its community of independent artists.