While being active on the big social media platforms is part of virtually any artist’s job, it’s often other places we think of when it comes to truly nurturing fanbases. If artists want to ensure their messages reach their audiences, SMS marketing can be an effective solution and Subtext has a pretty strong offer for artists.

“We built the platform because we looked at the ecosystem for athletes, artists, creators and anybody that was spending a tremendous amount of time, effort and resources into building up these huge audiences on social, only to come to the realisation that they were renting the relationship with their fans from the social platforms as opposed to owning it in a really meaningful way. We wanted to create a way for them to talk with their biggest fans in a more direct and personal way, which is why we chose sms and mms because it’s the way you talk to your friends and family”, says Michael Donoghue, Co-founder and CEO at Subtext.

There’s good news for marketers who have looked enviously at other popular SMS marketing solutions, such as Community, which currently only works for fans in the US and Canada: Subtext is operational in a number of markets internationally.

The artist also gets to choose their phone number. For example, if the artist is based in L.A. they will want to have an L.A. area code so it looks and feels like it’s coming from the artist. Fans globally will be able to receive the artist’s text messages no matter which country code the artist chooses for their phone number. Other Subtext features include the ability to have vanity numbers and setting up voicemails. When a fan calls an artist’s number and they have a voicemail set up, they can listen to the artist’s voicemail and artists often encourage fans to leave a voicemail too. 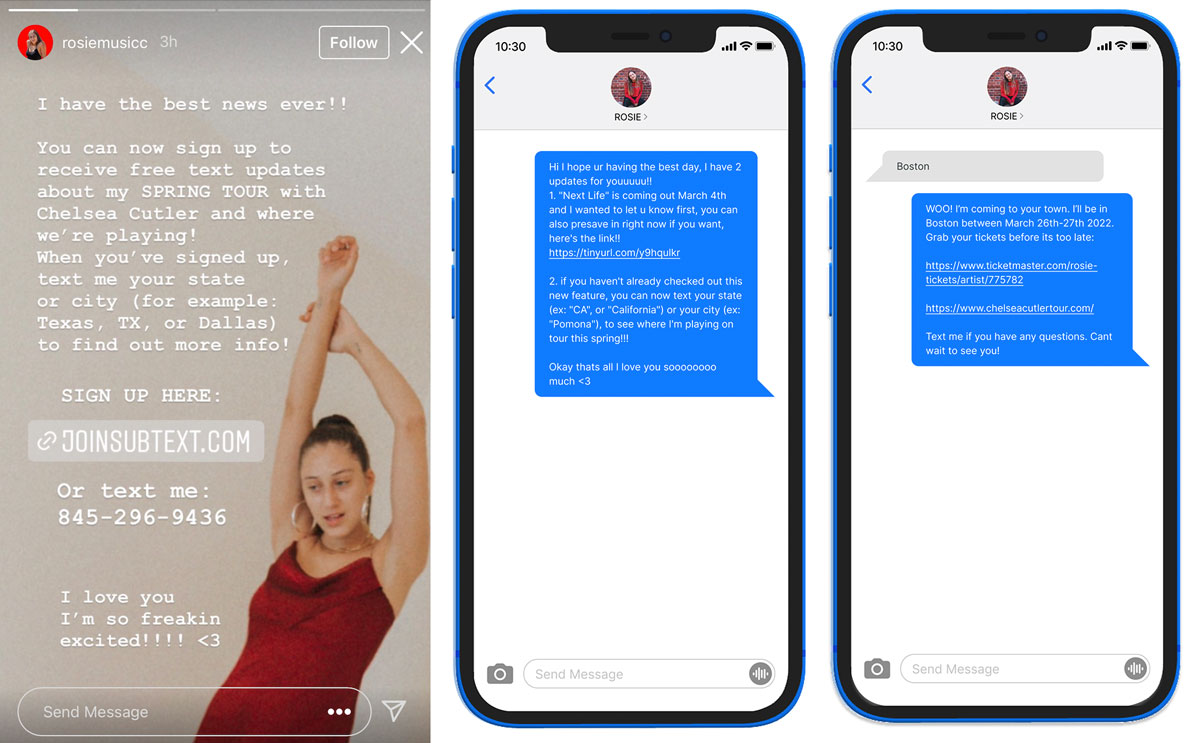 It’s easy to see how this UGC can be incorporated into wider artist marketing initiatives. “They’ll use them for cuts on socials or as part of their podcast. ‘Here’s a bunch of voicemails we got from fans around the drop of the album’. It’s a neat way for the artist to pay off fan participation,” says Donoghue. For example, Maren Morris recently used a vanity number within her album campaign, which she used as a hotline to give her fans exclusive first news around her new album ‘Humble Quest’ and she used the texts and calls from fans as a backdrop of things she was doing on socials. The number was also incorporated into associated merch items, further promoting the hotline – thus drumming up excitement leading up to the album release.

A meaningful connection with high CTR

Subtext has been around for nearly four years, and according to Donoghue, clients sent around 5bn text messages last year. Subtext works with many major media companies such as Condé Nast, Buzzfeed, Vox, and USA Today. On the artist and music side, Subtext works with indie artists and artists from all three major labels.

Donoghue says that the goal for artists using SMS marketing is to, “facilitate a more direct, meaningful connection with their audience – and cut out the toxicity and white noise of the social platforms to make announcements, or market tour dates or give a first look at merchandise.” SMS marketing can be used within a campaign or when the artist is off-cycle, to chat with fans, share behind-the-scenes and exclusive content, promote sales and streams, or even do scavenger hunt-type activations.

SMS marketing generally has a high open rate, compared to email or socials. Subtext say that their open rate for messaging is a staggering 98% – and when artists promote a pre-save link, the CTR is usually around 23-24%.

Another useful part off SMS messaging is that while artists can send out messages to all of their fans, the fans can reply to them, and start a 1-on-1 conversation. Subtext says that they usually see an engagement rate of 20% of fans engaging in replies. 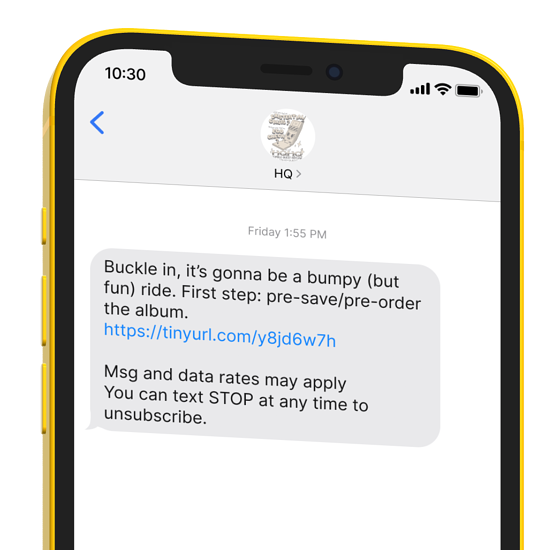 Subtext is available on desktop and web app, and has an easy-to-use backend that has the look and feel of an email client. If you want to send a message, users hit the “New Broadcast” button and enter a message they’d like to send. Media, like images, videos, audio files or GIFs can be attached – offering lots of creative opportunities for artists in fan communication or release campaigns. For example, they might want to share behind-the-scenes footage from a tour: Carly Rae Jepsen used Subtext around her Coachella appearance this year to tease her new single, boosting online chatter amongst fans.

Donoghue mentions the immediacy of SMS messaging to fans: he says that people will getting back with reactions, questions etc straight away. Artist teams can then check Subtext’s Inbox to read these fan messages – which can then be starred to bookmark them, or respond to them en masse. You can also see all replies as 1-on-1 conversations – and reply to fans individually.

in Subtext’s Subscribers tab, you can see the data around the messages, making it easy to filter for subscribers you haven’t ever replied to, and to help nurture fan relationships.  For bigger artists, where getting back to every single person 1-on-1 is not realistic, automatic replies are very useful and a great way to scale personalisation of messaging, even for artists with massive subscriber bases. Subtext cites examples where auto-replies have helped artists to drive ticket sales via personalised messages.

Another way to use Subtext to personalise the experience for fans is to set up keywords, and then to segment messaging based on them. The artist could ask fans a question like, “Did you like Album A or Album B more?” – and Subtext will automatically create new audiences according to what those users come back with. The Album B segment could then be sent preferred content, like a previously unreleased song from the album.

There’s three different ways for fans to sign up to be connected with an artist: they can either go to the artist’s or Subtext’s site, and enter their phone number in a sign-up form, or they can simply text the a unique 10 digit phone number that is assigned to every campaign. In the latter case, Subtext will bounce back an automatic link for them to sign up – with additional options for artists to capture data such as name, birthday, postcode, etc. The third route is for the artist to specify a keyword that fans can text to them to be automatically subscribed.

There are advantages and disadvantages to going down the keyword route versus providing a sign-up link – and depends on the use case and the data the artist wants to collect. Donoghue says that picking the use-case is important: “If you’re going to be on stage at Coachella and you want to flash up a phone number on-stage and the goal is to collect as many subscribers as possible, the keyword is a very intuitive way to sign up. However, the savviest artists want to collect some data, so that they just know more about their fans. If the goal is to consistently learn more about fans and personalise the experience for fans, you should choose the data capture option. The goal is to empower artists to own the relationship with their fans.”

There’s also the option to charge fans a monthly fee for exclusive access to the artist’s text messages – this can be done directly via Subtext, or via integrations with numerous different membership platforms such as Patreon or Substack.

Pricing and the future

Subtext allows artists to pause and resume SMS marketing activity, acknowledging that artists come into and out of cycle and might not need the tool all year round. The company will keep their number and data – so the artist can come back anytime.

Subtext, Donoghue says, doesn’t own any data: “it’s owned entirely by the artist. If after a few months they’re going to move on, they can take all the fan data with them.”

Looking into the future, Michael Donoghue plans on more international expansion: “there’s a ton of demand internationally. And then we’re really just looking at: how do we make it easier for fans to sign up? How do we enrich the experience for both fans and artists? So you might see us doing things with live audio, or with different media types in the messages itself. There’s certainly more to come both in terms of international expansion and the diversification of use cases.” 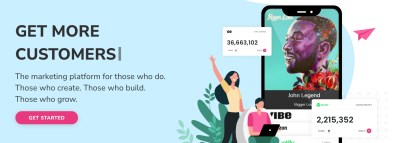 We’ve talked a lot about how smart link services are evolving to differentiate themselves from the competition and to provide more and more useful tools for artists and their teams. It’s been a while since we last covered...
Read More

A key takeaway from our Sandbox Summit Web3 Special at the end of June includes that NFTs sit alongside physical merch and music in appeal rather than superseding them. And that another good way to think about the opportunities...